The changing landscape for semiconductor industry mergers and acquisitions has been addressed by IC Insights In its upcoming Mid-Year Update to The McClean Report 2017. The historic flood of merger and acquisition agreements that swept through the semiconductor industry in the past two years slowed to a trickle in the first half of 2017, with the combined value of about a dozen transactions announced in 1H17 reaching just $1.4bn.

In the first halves of 2016 and the record-high M&A year of 2015, the combined value of acquisition agreements in 1H16 and 1H15 totaled $4.6bn and $72.6bn, respectively (Figure 1). Last year, M&A got off to a slow start - compared to the record-breaking pace in 1H15 - but several large transactions announced in 3Q16 pushed the 2016 total value in semiconductor acquisitions to nearly $100bn and within striking distance of the all-time high of $107.3bn set in 2015.

A few major semiconductor acquisitions were pending or rumored to be in the works during July 2017, but it is unlikely that a 2H17 surge in purchase agreements will bring this year’s M&A total value anywhere close to those of 2016 and 2015.

The big difference between semiconductor M&A activity in 2017 and the prior two years has been the lack of megadeals. Thus far, only one transaction in 2017 has topped a half billion dollars (MaxLinear’s $687m cash acquisition of analogue and mixed-signal IC supplier Exar announced in March 2017 and completed in May).

There were seven announced acquisitions with values of more than $1bn in 2016 (three of which were over $10bn) and 10 in 2015 (four of which were over $10bn). IC Insights’ M&A list only covers semiconductor suppliers and excludes acquisitions of software and systems businesses by IC companies (e.g., Intel’s planned $15.3bn purchase of Mobileye, an Israeli-based provider of digital imaging technology for autonomous vehicles, announced in March 2017).

The 250+ page Mid-Year Update to the 2017 edition of The McClean Report further describes IC Insights’ updated forecasts for the 2017-2021 time period. 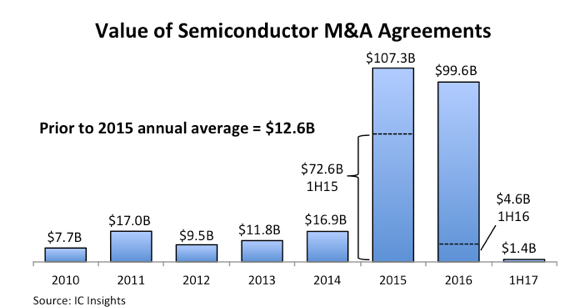