On 19th August, National Aviation Day, pilots, engineers and passengers alike will reflect on how far aviation has come in the last century. Could this be the future - an aircraft with 10 electric motors that can hover like a helicopter and fly like a plane? Forget future - this is a concept currently being developed by NASA researchers, under the name Greased Lightning, or GL-10.

The team, at NASA's Langley Research Center in Hampton, Virginia, initially touted the idea as a potential UAV. “We have a couple of options that this concept could be good for,” said Bill Fredericks, Aerospace Engineer, NASA. “It could be used for small package delivery or vertical take off and landing, long endurance surveillance for agriculture, mapping and other applications. A scaled up version - much larger than what we are testing now - would make also a great one to four person size personal air vehicle.”

The GL-10 is currently in the design and testing phase. The initial aim was to develop a 6.1m wingspan aircraft powered by hybrid diesel/electric engines, but the team started with smaller versions for testing, built by rapid prototyping.

“We built 12 prototypes, starting with simple 2.3kg foam models and then 11.3kg highly modified fiberglass hobby airplane kits all leading up to the 24.9kg high-quality, carbon fibre GL-10 built in our model shop by expert technicians,” said NASA Aerospace Engineer David North. “Each prototype helped us answer technical questions while keeping costs down. We did lose some of the early prototypes to 'hard landings' as we learned how to configure the flight control system. But we discovered something from each loss and were able to keep moving forward.”

It had already passed hover tests - flying like a helicopter - with flying colours. But the big hurdle was the transition from vertical to forward “wing-borne" flight. As engineers who have designed full-scale vertical take off and landing tiltrotors such as the V-22 Osprey will tell you, that is no easy task because of the challenging flight aerodynamics.

“During the flight tests we successfully transitioned from hover to wing-borne flight like a conventional airplane then back to hover again. So far we have done this on five flights,” said Fredericks. “We were ecstatic. Now we're working on our second goal - to demonstrate that this concept is four times more aerodynamically efficient in cruise than a helicopter.” 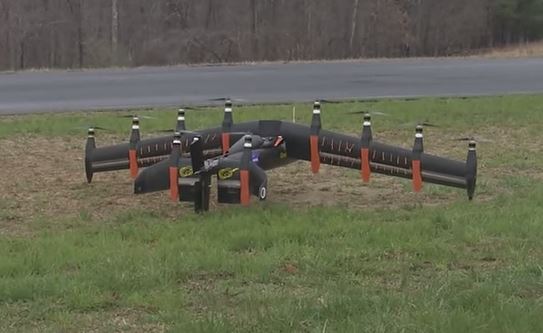 After a successful flight in “plane mode”, the GL-10 rotates its wings to make a perfect, impact-free landing in “helicopter mode”.

Zack Johns is the GL-10's primary pilot. He says flying the ten-engine aircraft has its ups and downs, but it really flies more like a three-engine plane from a control perspective.

One other advantage to the GL-10 besides its versatile vertical take off and landing ability is its noise or lack of it. “It's pretty quiet,” said Fredericks. “The current prototype is quieter than a neighbor mowing the law with a gas-powered motor.”

The next step in the GL-10 test programme is to try to confirm its aerodynamic efficiency. Part of that UAV research is for NASA Aeronautics' Unmanned Aircraft Systems Integration in the National Airspace System Project, led out of the Armstrong Flight Research Center in Edwards, California. Engineers from Armstrong will highlight project accomplishments and upcoming work in a booth in Atlanta. The goal of the project is to provide research results to reduce the technical barriers associated with integrating unmanned aerial vehicles into the skies.

Researchers from the Wallops Flight Facility in Wallops Island, Virginia will also be at the conference, highlighting unmanned aircraft for use in science missions. “Remotely piloted aircraft are enhancing NASA science investigations and serve as a platform to expand technology development for aircraft, cubesats and other platforms,” said Wallops Director's Office official Mike Hitch.