In a recently released report from, IC Insights, entitled: ‘Global Wafer Capacity 2019-2023’, the company provides in-depth detail, analyses, and forecasts for IC industry capacity by wafer size, process geometry, region, and product type through 2023. The graph below shows the worlds installed monthly wafer production capacity by geographic region (or country) as of December 2018.

Each number in the chart represents the total installed monthly capacity of fabs located in that region regardless of the headquarters location of the company that own the fab(s). For example, the wafer capacity that South Korea-based Samsung has installed in the US is counted in the North America capacity total, not in the South Korea capacity total. The ROW ‘region’ consists primarily of Singapore, Israel, and Malaysia, but also includes countries/regions such as Russia, Belarus, and Australia. 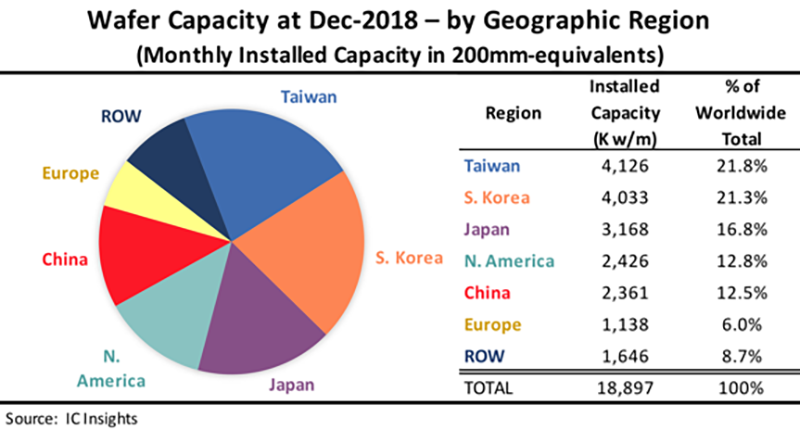 Japan remained firmly in third place with just over 16.8% of global wafer fab capacity. Micron’s purchase of Elpida several years ago and other recent major changes in manufacturing strategies of companies in Japan, including Panasonic spinning off some of its fabs into separate companies, means that the top two companies (Toshiba Memory and Renesas) accounted for 62% of that country’s wafer fab capacity.

China showed the largest increase in global wafer capacity share in 2018, rising 1.7% from a 10.8% share in 2017 to a 12.5% share in 2018. It nearly tied North America as the fourth-largest country/region with installed capacity. A lot of buzz circulated about China-based startups and their new wafer fabs during 2018. Meanwhile, other global companies expanded their manufacturing presence in China last year so it would be expected that the country’s capacity share would show a significant increase.