According to World Semiconductor Trade Statistics (WSTS), the semiconductor market was down 0.4% in first quarter 2017 from 4Q 2016 and up 18.1% from a year ago. The 0.4% decline in 1Q 2017 versus 4Q 2016 is strong compared to an average four percent decline from 4Q to 1Q over the previous five years. The relative strength in 1Q 2017 was driven by a strong memory market. The three largest memory companies - Samsung, SK Hynix and Micron Technology - grew their revenues a combined ten percent in 1Q 2017 versus 4Q 2016.

Memory will help drive solid 2Q 2017 growth over 1Q 2017. Micron Technology expects 16% growth in its fiscal quarter ending this month versus the prior quarter. Samsung and SK Hynix did not provide 2Q 2017 guidance, but both companies cited strong demand and healthy price trends for both DRAM and flash memory. With the exception of Intel - which is expecting a 2.7% decline - the top non-memory semiconductor companies have guided for healthy 2Q 2017 revenue growth. The midpoint of the guidance from these companies ranges from 2.3% from MediaTek to 5.0% from STMicroelectronics. The high end guidance ranges from 4.5% from MediaTek to 11.6% from Qualcomm.

Qualcomm cut $500m (about ten percentage points of growth) from its initial guidance due to a royalty dispute with Apple. NXP Semiconductors did not provide guidance since its acquisition by Qualcomm is pending. Toshiba's reporting has been delayed by financial problems and it is in the process of selling off its memory business. Intel's projected revenue decline and Samsung's strong memory growth is expected to result in Samsung passing Intel as the world's largest semiconductor company in 2Q 2017 according to IC Insights. 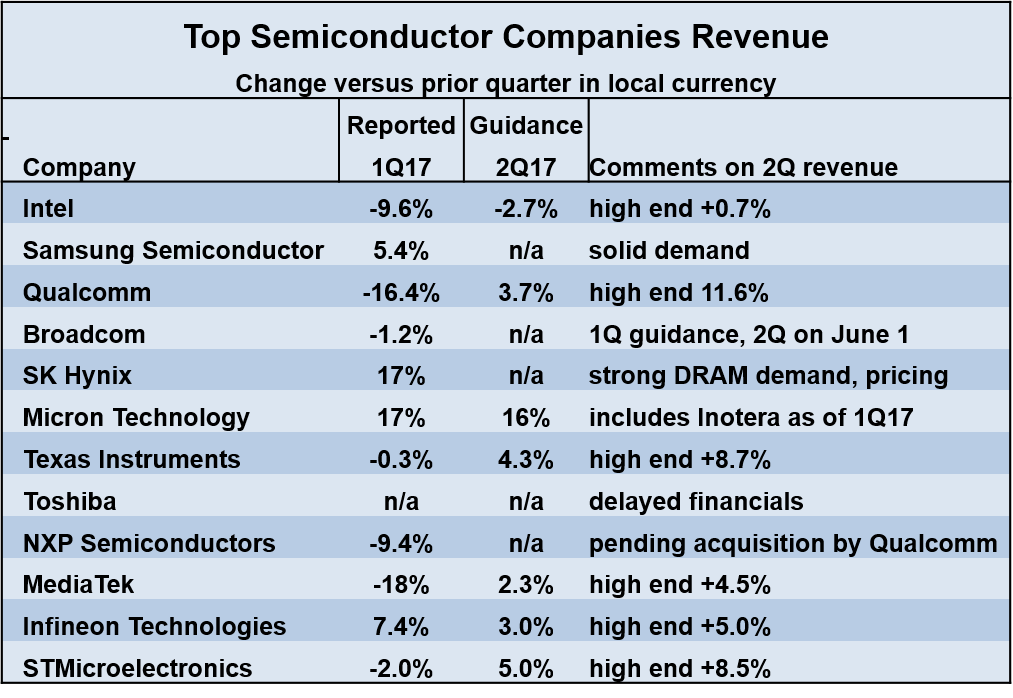 The outlook for full year 2017 semiconductor market growth has improved following the robust start to the year. Recent forecasts range from 11% from IC Insights to 16% from us at Semiconductor Intelligence. These forecasts are about five to six percentage points higher than the forecasts made by the same companies in the January to February time frame. Forecasts for 2018 include 3.5% growth from Mike Cowan and our Semiconductor Intelligence's seven percent growth. Our outlook for 2018 is based on moderating memory demand and stable economic trends and electronic equipment markets. 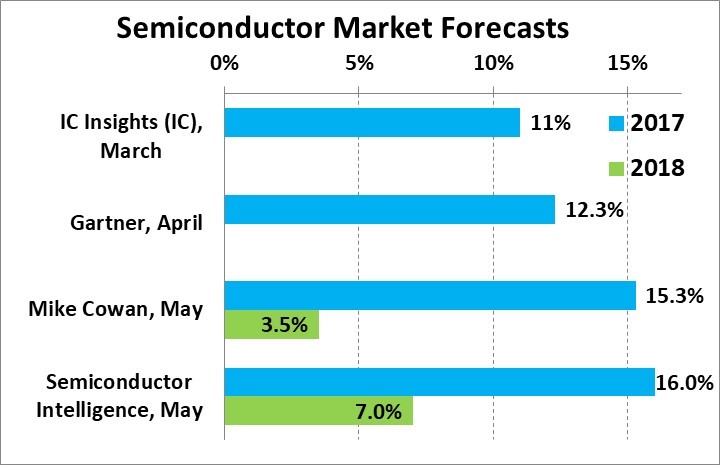 The global economic outlook for 2017 and 2018 is solid, according to the latest forecast from the International Monetary Fund (IMF). The table below shows IMF's April 2017 forecast for annual GDP percent change and the percentage point change in GDP growth rate (acceleration or deceleration). The IMF expects global economic GDP growth to pick up from 3.1% in 2016 to 3.5% in 2017 and 3.6% in 2018. The advanced economies should see modest growth of two percent in 2017 and 2018. Among the key countries in this category, improvement in the US is offset by flat or decelerating growth in the Euro area, United Kingdom and Japan. The global GDP growth acceleration is driven by emerging and developing economies. Within this category, lower growth rates in China are offset by accelerating growth in India and the ASEAN-5 (Indonesia, Malaysia, Philippines, Thailand and Vietnam). Also Russia and and Latin America should show growth in 2017 and 2018 after GDP declines in 2016. 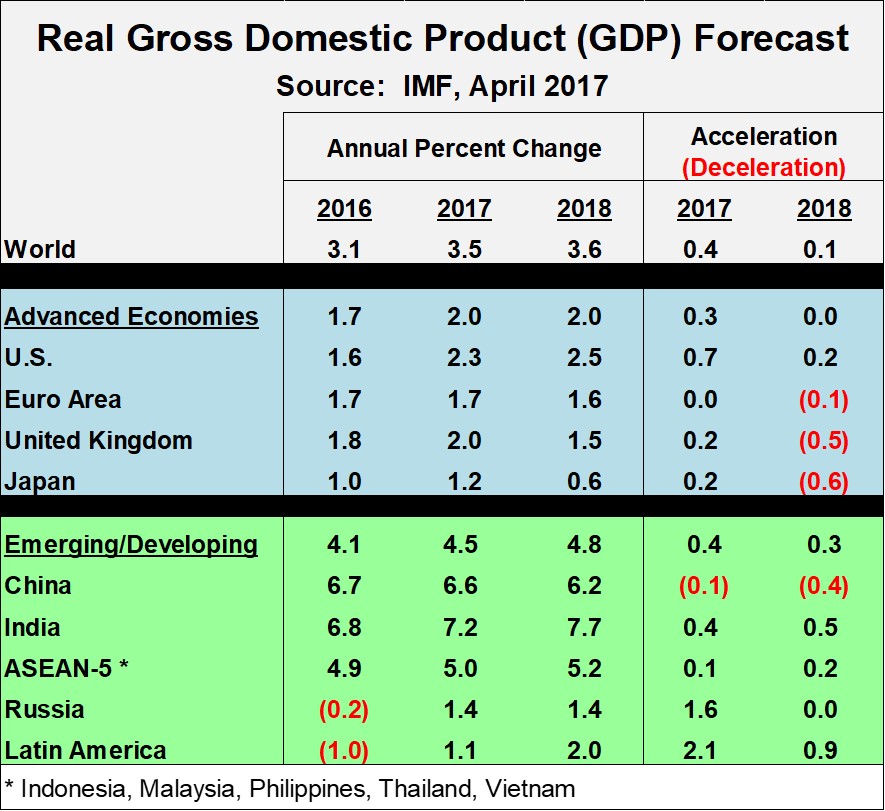