Smartphone sales in France fall for the first time

For the first time since the release of the iPhone in 2007, smartphone sales in France have fallen. According to a study published by the market and consumer information research company GfK, 20.2 million smartphones were sold in France in 2016. This represents a six percent reduction on the previous year, yet the market is still valued at €3.7bn.

GfK attributes the drop in sales to the ‘mature’ nature of France’s smartphone market: 70% of the French population now own a smartphone.

In 2015, one in four smartphone sales concerned models costing less than 100€ (£85). Last year, this figure fell to one in five, so it is apparent that consumers are now willing to spend a greater amount in order to get a long-lasting, quality product. In the smartphone market, bigger is better – models with 5”+ screens are the most successful.

France is the first country in the developed world to experience a drop in sales, but it seems likely that this trend will be echoed by other countries. 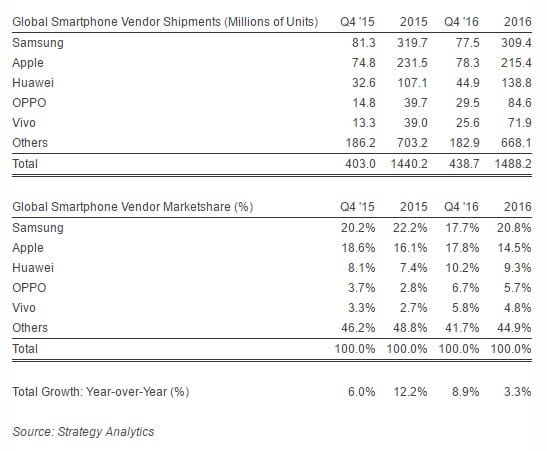 While mobile phone sales fell in France last year, it is interesting to consider how the global market is divided by manufacturer.

Table 1 shows how Apple narrowly topped the charts in smartphone sales during the final quarter of 2016. The iPhone sold 78.3 million units globally, compared to Samsung’s 77.5 million. In percentage terms this translates as a 17.8% market share for Apple and 17.7% for Samsung.

However, when we consider the year as a whole, Apple falls to second place with 215.4 million iPhone’s sold compared to Samsung’s 309.4 million. While France might now be experiencing a fall in smartphone sales, it is clear that a huge global demand remains.