IC Insights' November Update to The McClean Report 2019 will include a capital spending forecast for the major semiconductor companies for 2019 and 2020. In January of next year, IC Insights will release The McClean Report 2020 and present its seminars that review the five-year forecasts for the IC industry.

The share of semiconductor industry capital spending held by the top five companies’ (i.e., Samsung, Intel, TSMC, SK Hynix, and Micron) is forecast to reach an all-time high of 68% this year, surpassing the previous record high of 67% recorded in 2013 and 2018 (Figure 1). With the top five spenders holding only 25% of the total industry outlays in 1994, the trend of the big companies increasing their share of capital spending continues unabated. 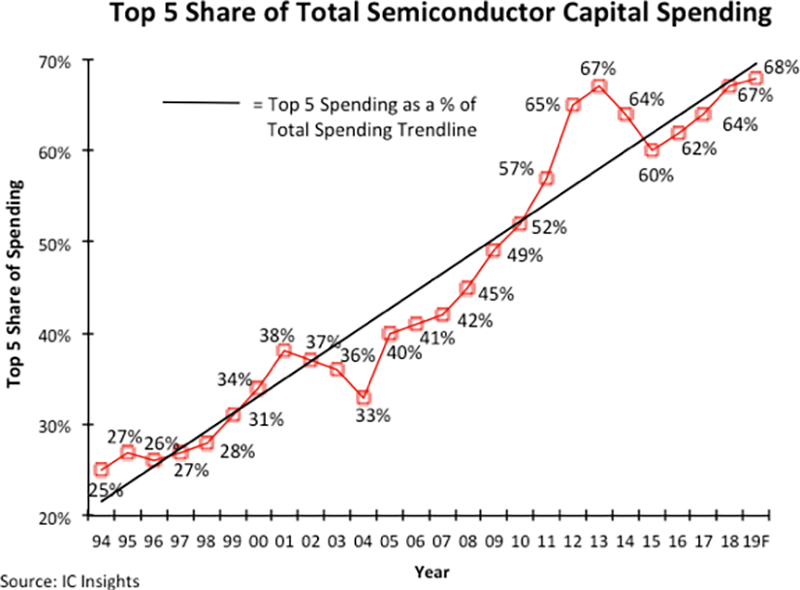 Figure 2 shows the 2019 quarterly capital spending trends for Samsung and TSMC using their guidance for 4Q19. As shown, both companies started off the year with relatively low outlays, and then boosted spending in 2Q19 to more moderate levels. Moreover, both companies announced in their 3Q19 conference calls that they plan to ramp up their spending in 4Q19 to record-high levels. 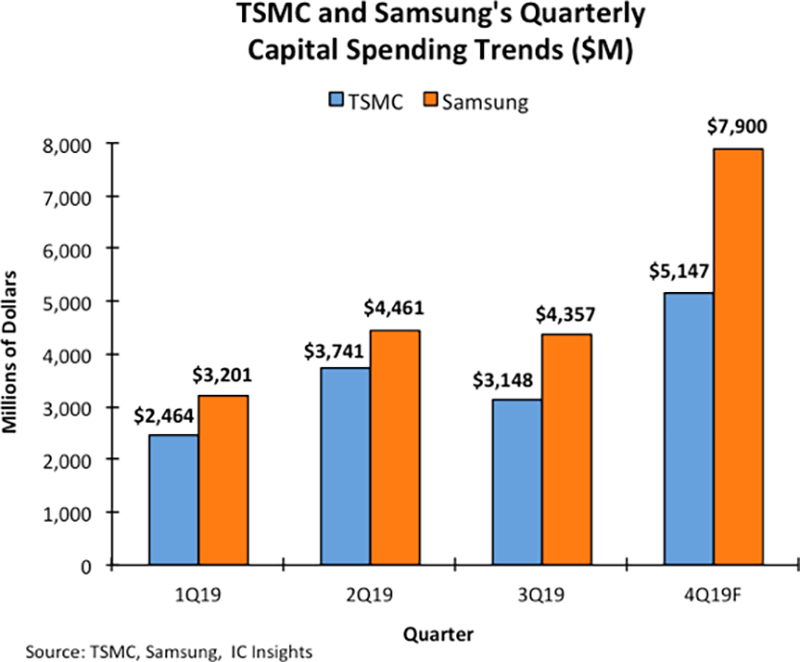 For 4Q19, TSMC plans to increase its capital expenditures by 64% to $5,147m, compared to 3Q19. At this level, it would represent an all-time high for the company’s spending in a quarter, exceeding its previous record of $3,799m in 1Q14 by 36%. TSMC is the only pure-play foundry to offer leading-edge technology and is seeing very strong demand for its 7nm process, which is expected to represent 33% of the company’s sales in 4Q19. Most of its current investment will target adding capacity for its 7nm and 5nm technologies.

Samsung also announced plans to set a new quarterly record high for its semiconductor spending in 4Q19, with “the majority of the 4Q19 capital expenditure earmarked for building memory infrastructure to address mid- to long-term demand.” The company plans to increase its 4Q19 outlays by 81% as compared to 3Q19 to $7,900m. This level would exceed Samsung’s previous quarterly spending high of $6,877m in 4Q17 by 15%.

Moreover, Samsung’s $65.8bn in 2017-2019 semiconductor capital expenditures would be more than double the $30.8bn spent by all of the indigenous China semiconductor suppliers combined over this same timeperiod. It appears that the company is very serious about staying well ahead of the new China memory startups and competing with TSMC at the leading-edge of logic technology.