Revolutionising the future of electronic devices

New research by the Universities of St Andrews and Tokyo has revealed an understanding on how to create topological electronic states in solids which could fuel the development of improved materials for fast and energy-efficient electronic devices. The findings could lead to new types of computer chips that could be much more powerful than those found in today’s computers and smart phones.

The way in which electrons behave inside a solid is governed by its electronic structure, an intertwined network of ‘bands’ which define the allowed energies and momenta of electrons in the solid. If the right type of bands cross over, this can give rise to interesting, and potentially extremely useful, physical properties of materials. For example, it was recently realised that isolated touching points of these bands can be stabilised by certain crystalline symmetries, creating so-called Dirac fermions in the bulk electronic structure.

This allows electrons in the bulk of the crystal to behave as though they were massless particles, effectively a bulk analogue of the atomically-thin material graphene. As well as being an exciting playground for studying fundamental concepts of particles in physics, this can lead to ultra-high mobility of charge carriers, a property that could be used to make extremely good conductors.

If the crossing is not protected, another exciting state termed a ‘topological insulator’ can be stabilised. Here, the bulk of the material behaves similarly to a normal electrical insulator, but its surface supports so-called ‘topological surface states’ – additional bands forming protected crossing points containing only electrons localised to the material surface. Practically speaking, these surface states provide a conductive shell around the material bulk, which can remain intact even when the material has defects or damage. An electronic insulator can therefore be transformed into a good conductor at its surface, with potential applications in proposed schemes of electronics that exploit the electron’s spin as well as its charge.

Given both the fundamental and practical interest in such systems, there has been enormous recent effort in identifying compounds where these sorts of states can be found. To develop a set of guiding principles towards achieving this, an international team of scientists from the UK, Asia and Europe have combined detailed theoretical modelling with experimental studies. 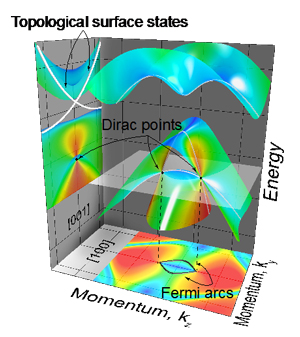 Their findings, published in the journal Nature Materials (27th November), demonstrate a very general mechanism for generating multiple sets of topological surface states and three-dimensional Dirac fermions all within the same material. The researchers found evidence for these in six separate compounds from the family of layered transition-metal dichalcogenides, a materials system which has been extremely heavily studied due to the wide array of novel physical phases which they host, from unconventional semiconductors to superconductors, and their potential to act as next-gen graphene analogues.

Saeed Bahramy, of the University of Tokyo and the RIKEN Centre in Japan, who led the theoretical work, commented: “Transition metal dichalcogenides are best known for their unique electronic, spintronic and valleytronic properties. Knowing that they can inherently host such novel topological phases brings about new possibilities for realisation of next-gen electronic devices with advanced functionalities.”

Key to the researchers’ findings is a disparity in how electrons can move along different directions of the crystal, coupled with a simple rotational symmetry that can protect some band crossings. The study showed how this naturally leads to the formation of stacked sets of topological surface states and 3D Dirac fermions in the transition-metal dichalcogenides. The findings should not be limited to this materials system. Similar starting conditions can be found in many different materials, raising the exciting prospect that the features uncovered here are in fact significantly more common in nature than is typically assumed.

Oliver Clark, from the School of Physics and Astronomy at the University of St Andrews, who led the experimental work, added: “The number of ingredients you need to enable these features to arise in a given material is very small, and each of them very common. This therefore drastically expands the range of possible materials in which you can expect to find these topological signatures.”