In 2018 everything has been hunky dory for component distribution. “Phenomenal,” exclaimed Dave Doherty, President and COO of Digi-Key Electronics. “The best in 20 years on a broad-based demand.”

“Fantastic,” agreed Mark Burr-Lonnon, Senior Vice President, Global Supplies, for Mouser Electronics. “We’ve taken advantage of the market situation and grown 40% globally. Asia/Pacific led the way with 47% growth, a short head in front of the 46% posted in Europe, and even the more mature north America market produced a 35% increase.”

Chris Breslin, who took over as President of Premier Farnell earlier this year has enjoyed similar success. It saw sales soar 7.2% to $379m in its first reporting quarter this year, and income grew 25%.
For Digi-Key’s Doherty, new applications have been spur to the market.

“People talk about IoT and that has just exploded, people needing help as they want to connect sensors to processors and connectors. So if you look at our website and the IoT solutions page, we can help engineers move from conception, into schematic and then into design. We will help them work that whole design chain,” he explained. 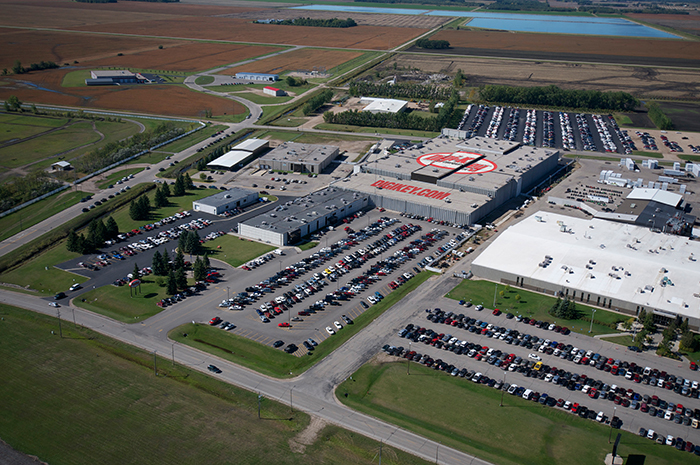 And as a mark of true confidence Digi-Key is cracking on with the build of a brand new warehouse facility at its Thief River Falls headquarters (pictured above).

“It’s coming along well,” smiled Doherty, noting the vagaries of the Minnesota climate. “It will add one million square feet of space, more technology, and more automation. It will enable us to really service our customers while they are doing the hard work, the design activity.”

For 2019 Doherty is hesitant to issue a forecast noting the industry’s none too stellar form here. “We’re bullish about next year based on present activity,” he commented. “Will other issues affect us, we don’t know right now, so yes bullish.”

Mouser is also adding warehouse space, just two years after its last expansion. “We keep building warehouses and they keep filling up,” laughs Burr-Lonnon. “We thought the latest expansion would last five to seven years, but that’s full up.”

“So we have broken ground on a new warehouse which will be ready next year. In the meantime we have taken extra space close by our global facility as our aim is to have one million products in stock by the end of the year.”

And not to be outdone Premier Farnell’s new 360,000 sq ft facility in Leeds is expected to be completed late next year or early 2020. The company is already investing in inventory, to ensure as Breslin put it, “We have that mile wide, inch deep rich mix of product.”

It may not be all plain sailing for distribution. Steve Rawlins, CEO at UK-based Anglia has a word of warning on prices.

While advising customers that lead times on chip resistors and passives are now generally reducing – they are seeing 12-13 weeks now in some cases, this improved availability may lead to some price instability according Rawlins.

Commenting on the reasons for this development Rawlins observed: “Weak iPhone demand and a softening of the Chinese economy in the face of sanctions are two of the factors behind this. We believe we are in an inventory correction period as many customers have had to purchase in large quantities to secure components. I believe that this build-up of customer inventory could take till the end of Q1 next year to burn off.”

Rawlins added: “We believe that although improved availability is good news in some ways, there is likely to be price instability as this material is worked through.”

He said: “For our industry in general massive lead time swings don’t do anyone any favours in the long term as it becomes difficult to predict demand for both the distributor and the customer. We all want growth but in a measured way so everyone can plan material and at the end of the day deliver to the end customer on time.”

DMASS, which represents distributors and manufacturers of semiconductors, reported Q3/2018 growth of 6.3% year on year to €2.3bn. The first three quarters show the same 6.3% increase to €6.91bn.

Georg Steinberger, chairman of DMASS observed: “Compared to the double-digit projections we keep seeing for the total European semiconductor market from WSTS and others, European distribution does not seem to enjoy the same dynamics. However, most of their total projections are in

Steinberger added: “After nine months, it shows clearly that countries with a rather huge contract manufacturing focus are growing significantly faster than the major countries in Western Europe. And most of these contractor countries are in the East and to some extent the South of Europe.

For the year 2018, we maintain our position of a solid single-digit ending.”

Although there have been some warnings on a slowdown by semiconductor companies, Arrow Electronics CEO Michael Long is also optimistic about 2019.

“Things look pretty good going into next year. I think the design activities we have is certainly going to help the second half of that year because that's usually the timeframe you have on designs. So we're actually feeling pretty good that if there is a downturn, it could be minimised by the business that we have in-house and that's what we've been striving for. So if there is one, we're going to be in about the best shape that we've ever been in.”