Our website is made possible by displaying online advertisements to our visitors. Please consider supporting us by disabling your ad blocker.
Home > News & Analysis > Micron and the Taiwanese semi suppliers: coal mine canaries?
Analysis

Micron and the Taiwanese semi suppliers: coal mine canaries?

IC Insights reports on semiconductor sales and considers the implications of the semi market based on the experiences of Micron and other major foundries such as TSMC.

On the 30th of June 30, 2022, Micron (the third largest memory supplier in the world) reported its fiscal 3Q results that ended in May. These results were very strong, with the company posting sales of $8.6 billion, up 11% from the previous quarter and 19% higher than one year earlier. However, the guidance for its fiscal 4Q sales ending in August was the epitome of a 'canary in a coal mine' moment.

As reported, Micron’s guidance for its fiscal 4Q is for sales of $7.2 billion, +/− $400 million.  At this mid-point, the company is expecting its fiscal 4Q/3Q sales to plummet 17%. This steep decline in its fiscal 4Q includes July and August, two of the three months in calendar year 3Q, which, due to the seasonality of the semiconductor industry, is typically the strongest growth quarter of the year. It currently appears that Micron has given us an early warning that the third quarter of the 2022 memory market will be extremely weak.

While the vast majority of semiconductor suppliers only report their sales results on a quarterly basis, many of Taiwan’s semiconductor companies report their top line revenues on a monthly schedule with more financial details described in their quarterly reports. Oftentimes, these monthly results provide an early indicator of a possible change in direction in the semiconductor market, up or down.

Figure 1 shows the June/May sales results of the top-10 Taiwanese semiconductor suppliers. In total, these 10 companies posted a 5% drop in June semiconductor sales as compared to May, with three of the four largest companies (including TSMC) registering a decline. Particularly worrisome is the steep 26% decline in the June/May sales by previous 'high-flyer' Novatek (the company posted a 2021/2020 sales increase of 78%).

Note also the 16% drop in June/May sales by DRAM supplier Nanya, possibly confirming the dire memory market outlook Micron alluded to in its 30th June guidance. Typically, a month-to-month decline in sales would not be a cause for concern. However, historically, semiconductor companies post the strongest sequential increases in monthly revenue in the last month of each quarter (namely March, June, September, and December), as is evident in the WSTS – World Semiconductor Trade Statistics – monthly data. 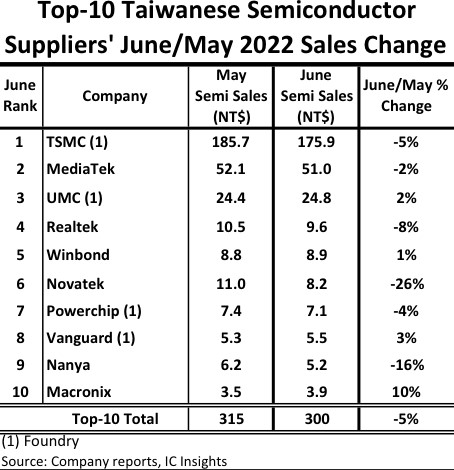 While not providing a monthly sales result, Himax Technologies, the fourth largest Taiwanese fabless IC supplier, released updated guidance for its 2Q22 revenue on 30th June, 2022.  The company stated that it expects its 2Q/1Q sales to fall by 22% to 27% (lower than its initial guidance for a 16 to 20% decline). TSMC, by far the largest foundry in the world as well as the largest Taiwanese semiconductor supplier, is especially worth watching for signs of weakness in the industry.

As shown, TSMC’s June 2022 sales were down 5% from May 2022. It should be noted that from 2016 through 2021, the company posted an average June/May sales increase of 14%, with 2018 registering the only decline (−13%) during this timeperiod. It will be especially interesting to hear TSMC discuss its 3Q22 guidance when it reports its 2Q22 sales results on 14th July, 2022 (the first top-25 semiconductor supplier to report its calendar year 2Q results and offer guidance for 3Q).

Regarding the company’s historical 3Q/2Q performance, from 2016 to 2021 TSMC registered an average sales increase of 16% and hasn’t logged a 3Q/2Q revenue drop since 2011. IC Insights plams to update its detailed 2022 through 2026 semiconductor market and capital spending forecasts in its upcoming August Update to The McClean Report.

The 2022 McClean Report, 'The McClean Report—A Complete Analysis and Forecast of the Semiconductor Industry', is now available. A subscription to The McClean Report service includes the January Semiconductor Industry Flash Report, which provides clients with IC Insights’ initial overview and forecast of the semiconductor industry for this year through 2026. In addition, the second of four Quarterly Updates to the report was released in May, with additional Quarterly Updates to be released in August and November of this year.