Engineers are always looking for alternatives to chemicals that might have health concerns or cause environmental damage.Worries abound: from long-term health effects, to environmental implications to economic considerations, these all have had a huge impact on the manner in which industry cleans. Regulations and guidelines can be bewildering especially with the laws continually changing and redefining the choices companies can and can’t use.

As a solvent, nPB is a powerful degreaser that removes oil and grime quickly. Notice the over-spray from the high pressure aerosol; this increases worker exposures. With this in mind, choices on cleaning fluids can be very limited, and the risk of making a ‘wrong’ choice can seem very high.

This lack of choice sometimes leads engineers towards using the same product, time after time, even if it is fraught with potential problems. This situation is apparent with companies who are using aerosol cleaners packaged with a chemical called normal propyl bromide, or nPB. These products are highly effective precision cleaners with very attractive prices. However, the toxicity standards for these products are being tightened and their use will become problematic. Many users don’t realise there are safer choices out there.

nPB Up Close
Normal propyl bromide is a non-flammable organic solvent based on the element bromine. The fluid has a molecular formula of C3H7Br. It is often used as a replacement for methylene chloride, perchloroethane (“perc”) and trichloroethylene. Bromine is used in a wide variety of industrial applications such as fire retardants, water purification, pesticides and drugs, as well as sedatives and antihistamines.

A subset of the bromine product range is ‘n-propyl bromide.’ This is the solvent version of bromine. It also is called ‘1-bromopropane’ as well as other names. To determine if you are using nPB, examine the aerosol can or on the safety data sheet. Specifically, look for an ingredient with the Chemical Abstract Number (CAS #) 106-94-5. If it’s there, no matter what name they give the ingredient, it’s nPB.

Due to a lack of clinical toxicology studies, the original toxicity level for nPB was thought to be around 100 ppm, but the solvent was rarely used because other alternatives were available. After the completion of preliminary exposure studies in 2004 the toxicity rating of nPB was lowered to 25, which is low but manageable. Proper storage and handling, along with protective equipment, can manage the risks of short-term overexposure.  Later toxicology studies found nPB seriously damaged the nervous system with symptoms including headaches, slurred speech, difficulty walking, and/or loss of feeling in arms and legs. In 2004 n-propyl bromide was found to alter human DNA and have harmful effects on fertility. Based on these reports, the National Toxicology Program (NTP), OSHA and the EPA (US Environmental Protection Agency) recommended 10 ppm as the proper exposure limit. Separately, California adopted a 5ppm limit. The European Chemicals Agency (ECHA) listed nPB as a ‘Substance of Very High Concern’ in December 2012. To this effect, REACH (Registration, Evaluation, Authorisation and Restriction of Chemicals) can place a complete ban in the future on any products containing the substance. 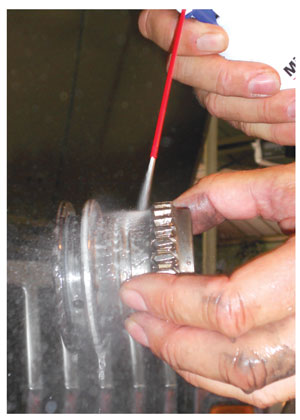 The US Department of Labour’s Occupational Safety and Health Administration (OSHA) and the National Institute for Occupational Safety and Health have issued a hazard alert to urge employers that use 1-bromopropane (1-BP) to take appropriate steps to protect workers from exposure. The government of Ontario, Canada also has become concerned about the long term toxicity of n-propyl bromide (nPB). Late in July 2017 the Ministry of Labour – Ontario’s version of OSHA in the United States — enacted new worker-safety rules which will restrict the handling and deployment of these widely-used chemicals. Specifically, Ontario has adopted the revised occupational exposure limits (OELs) recommended by ACGIH.

An unusual feature of this rule-making is short time-line — less than six months — suggesting the government is moving with an unexpected sense of urgency. In 2016 Ontario produced 39% of Canada’s total GDP. A huge proportion of Canada’s manufacturing sector — industries such as auto-making, food and beverage, fabricated metals and more — is concentrated in Ontario. Therefore, it is highly likely that many advanced manufacturing companies in Canada will be affected by this new rule, even though theoretically it is only a provincial requirement.

"The use of 1-bromopropane has increased in workplaces over the last 20 years," said Dr. David Michaels, Assistant Secretary of Labour for Occupational Safety and Health in an official statement. "Workers exposed to this toxic chemical can suffer serious health effects, even long after exposure has ended. Hazardous exposure to 1-BP must be prevented. Employers have a responsibility to ensure the safety of their workers.”

Further studies discovered potentially carcinogenic effects. Recently the American Conference of Governmental Industrial Hygienists (ACGIH) concluded the 8-hour time-weighted average exposure limit for 1-bromopropane should be reduced from 10 parts per million (ppm) to 0.1 ppm and in 2016 the U.S. Environmental Protection Agency (EPA) added nPB to the Toxic Release Inventory which requires companies using nPB to file an annual report on the emissions and disposal of nPB. In short, while nPB has been an acceptable choice for precision cleaning in tightly sealed cleaning systems for years (see: Federal Register, May 30, 2007) the use of nPB in aerosols is still proposed to be unacceptable, but a final ruling has not been published. This means the chemical legally can still be packaged within an aerosol.

MicroCare does not package nPB into aerosol canisters. It is almost impossible to use any fluid in an aerosol package and keep exposures below 10ppm, much less the proposed new TEL level of 0.1 ppm. Testing at MicroCare years ago determined that under the best of circumstances exposures for workers using aerosol cans are in the 10-20ppm and one could expect uncontrolled, highpressure aerosols to generate substantially higher exposures. But here’s the key question: are the intended replacements for nPB up to the job? Can customers stop using nPB and switch to newer and safer cleaning products? For that answer, a simple field test seems well-justified.

Field Tests
The criteria for which customers should be searching is clear and allencompassing: a non-flammable, fast-drying, highly aggressive solvent that cleans well, doesn’t damage the environment and has acceptable toxicity ratings. Most companies using aerosol degreasers use a simple ‘visual inspection’ to confirm the parts are clean enough. Conversations with operators confirm they are looking for fast, safe, convenient “good enough” cleaning. A suitable location to test cleaning results was at a local auto transmission repair shop, who opened their workshop to cleaners and photographers from MicroCare.

Auto parts are heavily contaminated with dirty lubricating oils, these can be considered typical of the industrial cleaning applications found in almost every factory around the world. Gears, levers, push-rods, conveyor systems and actuators of all sorts become covered in dirt, dust and debris over time, and these must be cleaned before repair.  In this real-world field test, a wide variety of transmission parts were cleaned with two different nPB aerosol cleaners and one HFC-based aerosol cleaner. Cleaning was enhanced by scrubbing the parts with a stiff brush. Operators judged the cleaning effectiveness to be very good on all three products even when the residues were baked into place. When the parts were placed side-by-side after cleaning, operators could not detect a difference between the parts cleaned with nPB and the parts cleaned with HFC-trans blends. Both types of chemistry are definitely not ‘plastic-safe’. As a side-by-side test of their cleaning strength, the sprays were aimed at a soft plastic foam product. Both destroyed the foam instantly. This suggests that in terms of cleaning strength the materials operate in a highly similar manner.

Operators observed a few interesting differences. The nPB-filled aerosols were packaged at higher pressures than the HFCbased cleaner, so those cleaning fluids came out faster and with more ‘scrubbing’ power. This obviously is a function of the packaging and not the cleaners themselves. The operators also commented on how the HFC-based cleaner evaporated faster than the nPB-based cleaners. Since nPB boils at 70˚C, about 40˚C higher than HFC blends, it should evaporate more slowly. This observation caused some divergent opinions. One operator thought fast-drying was convenient, and allowed him to work more efficiently. The other operator felt he used more solvent because it evaporated so quickly.  Both operators noticed the HFC-based cleaner had far less aroma than the nPBbased cleaners and both felt this was a significant improvement.Nobody, it seems, likes smelly chemicals even when they work really well. MicroCare provides air monitoring badges to clients using nPB purchased from MicroCare, so during the tests one tech wore a badge. This unobtrusive device ‘sniffs’ the air and provides insights into the environment surrounding the operator. After cleaning, the badge was sealed and sent to the lab for testing.

There are a wide variety of cleaning options on the market today that don’t require compromise or sacrifice of safety Results indicated the operator had been exposed to approximately 20 ppm of nPB during the 2-hour test session. This suggests the exposures from even this simple test put operators over the latest OSHA, EPA and ACGIH exposure limits and puts employers using nPB at substantial liability. Savvy companies will use the badges to make changes in processes (e.g., better training, better ventilation, or other steps) if worker exposures change.

Making the Right Choice
Many industrial customers need a strong, nonflammable aerosol degreaser. However, it is clear there no longer a need to use nPB-based aerosols. While these tests were not rigorously scientific and were conducted with a very small sample, these admittedly anecdotal conclusions strongly suggest that today there are viable choices on the market that are substantially safer than nPB.  It seems reasonable that any well-informed company buying aerosols containing nPB should be looking to change as soon as possible. Furthermore, any distributor selling aerosols filled with nPB aerosol should be concerned about product liability.

Everybody should be helping their operators select and procure a newer, safer cleaning fluid. While companies may pay a small premium in price for these products the improvements in worker safety are substantial.