Earlier this year Toshiba Corp agreed to pay $2.168bn to walk away from two unfinished nuclear reactors in South Carolina being built by its Westinghouse subsidiary. Payments will be made in instalments that began in October and will end in September 2022.

Toshiba’s Westinghouse Electric Co filed for bankruptcy in March, overwhelmed by the cost overruns at the VC Summer plant in South Carolina and a similar unfinished nuclear project known as Vogtle in Georgia. The projects were years behind schedule.

It was then announced last month that Toshiba is being investigated by regulators in Japan concerning financial reports relating to the failed Westinghouse nuclear unit.
Reuters reported that the Japanese Securities and Exchange Surveillance Commission is examining whether the process involved in creating Toshiba's financial report for the 2016-2017 financial year is completely legitimate.

The Japanese firm now expects a net loss of 390 billion yen for the fiscal year ending in March 2017, as well as an operating loss of 410 billion yen, and in September, following an extraordinary shareholders’ meeting, Toshiba formally announced the sale of its memory chip business.

Since then Toshiba has put in place measures to rebuild the group and regain stakeholder trust via the elimination of risk related to the overseas nuclear power business, the recovery and strengthening of the company’s financial base via third party investment in the memory business, and the enhancement of the group’s operations in the form of spinning off the businesses as wholly owned subsidiaries.

Peter Lieberwirth, Toshiba’s VP of Strategic Business Planning, said: “Obviously over the last two years we’ve had some issues with the discovery of the multi-billion dollar gap in the accounting of our nuclear business. Because of that one of the key issues for us moving forward is to regain stakeholder trust.

“To do so we’ve established these three key measures. One is to eliminate risk that stems from these overseas nuclear activities. Because of that we’ve had the chapter 11 filing (the United States Bankruptcy Code, which permits reorganisation under the bankruptcy laws of the US), by Westinghouse Electric Company (WEC), which was completed in March.

“The next thing is to close that financial gap, and recover and strengthen our financial base, and this we have tried to do with the sale of our memory business. Finally, we also need to look at the operation of Toshiba Group as a whole, and we believe that having the business spun off as wholly owned subsidiaries, (which will provide more freedom and flexibility for rapid decision making, and enhance governance and risk management), is the right way to go forward. And we started to do this in July. 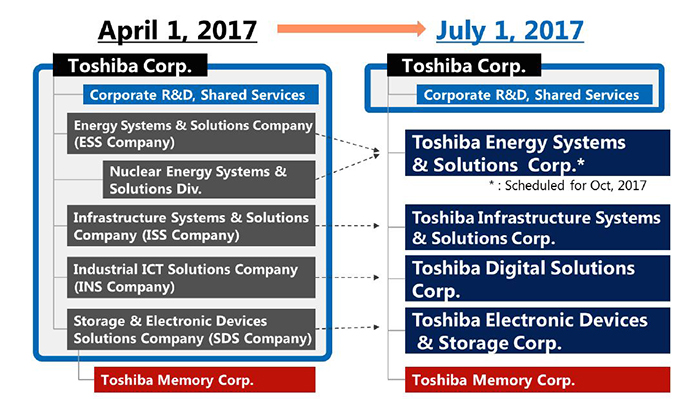 “So, in the past all the business units have been operated as in-house companies under the roof of Toshiba Corporation. Now, in order to achieve this greater flexibility the main businesses have been spun off.

“The forecast for the running fiscal year 2017 (a period running from April 2017 to March 2018), is roughly $45bn and the majority of the business (38%) is made up of the operations for electronics devices, which includes the new company, Toshiba Memory Corporation and the remaining part, Toshiba Electronic Devices & Storage Corporation.”