Liverpool students go on a voyage of discovery

A group of student from Broadgreen International School in Liverpool had the wind in their sails as they visited Ørsted’s operations and maintenance site at Kings Wharf on Thursday. The multi-million pound facility, which opened last year, is the control room for two offshore wind farms off the coast of Liverpool, Burbo Bank, and Burbo Bank Extension.

The visit was organised as part of the renewable energy company’s partnership with education charity, Teach First and saw 13 pupils attend.

Following a tour of the site, giving an insight into the various roles and activities needed to operate an offshore wind farm, the students heard first hand from several employees who spoke about their career paths and life in the offshore wind industry. They then took part in a CV workshop designed to help them think about transferrable skills and how best to present themselves to future employers. The day ended with the pupils building their very own model turbine!

Mark Blackham, a physics teacher at Broadgreen International School and the school’s STEM coordinator for career & employability opportunities, said: “It is essential that our young people are made aware of the outstanding engineering opportunities available to them as the world moves toward a renewable economy. Ørsted is leading the way in providing our children with these experiences and we are very much looking forward to our visit.”

Russell Hobby, Chief Executive of education charity Teach First, said:“There is lots of evidence that it’s really important for young people to have meaningful interactions with businesses while they’re at school. Giving these pupils the chance to experience first-hand such an exciting and important industry is a wonderful opportunity. We’re delighted to have Ørsted as a supporter, not least as it means we can work on wonderful initiatives like this that help equip young people with the skills, knowledge and aspirations they’ll need to reach their full potential.” 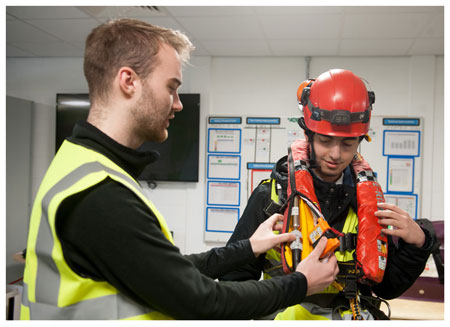 Lee Rollason, Ørsted’s Head of Burbo Operations, said: “The 8MW turbines at Burbo Bank Extension are the biggest in the world and the project, which was completed last year, was the first offshore wind farm globally to use these turbines. We want local people to know and be proud of the part Merseyside has played in advancing the whole offshore wind industry.

“We also want to encourage young people to learn about different energy sources and consider the various skilled roles the industry offers on their doorstep. We’ll be operating out of Merseyside for at least another 25 years, so it’s extremely important that we engage with pupils now so they know what opportunities are available to them.”

Ørsted, formerly DONG Energy, has been operating out of Liverpool for over a decade since it opened Burbo Bank offshore wind farm in 2007. Combined, Burbo Bank and Burbo Bank Extension can generate enough clean electricity for over 310,000 homes.

The company also helps local projects through its Community Benefit Fund. Each year for the expected 25 year lifetime of the Burbo Bank Extension offshore wind farm, approximately £225,000 will be made available for community projects, which will benefit the local area.

Over 70 groups have already benefited from grant support through the Fund which has given away over £560,000 since it launched in May 2015.