Intel to keep its number one semiconductor supplier rank

The top-15 companies semiconductor sales are broken out into IC and O-S-D (optoelectronic, sensor, and discrete) device categories for 2019 and 2020. The forecasted 2020 top-15 semiconductor supplier ranking includes eight suppliers headquartered in the US, two each in South Korea, Taiwan, and Europe, and one in Japan. 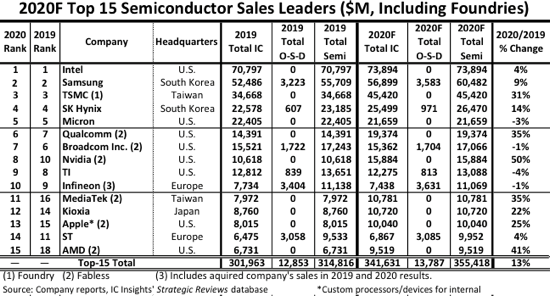 The semiconductor industry has been one of the most resilient markets during this corona-virus plagued year. Although causing a deep global recession in 2020, the Covid-19 pandemic spurred an acceleration of the worldwide digital transformation resulting in remarkably robust semiconductor market growth.

There are expected to be two new entrants into the top-15 semiconductor sales ranking for this year—MediaTek and AMD, with these companies forecast to register strong sales increases of 35% and 41%, respectively. As shown, MediaTek is expected to jump up five spots to 11th place while AMD is forecast to move up three positions to 15th this year.

Apple is an anomaly in the top-15 ranking with regards to major semiconductor suppliers. The company designs and uses its processors and other custom ICs only in its own products—there are no sales of the company’s IC devices to other system makers. IC Insights believes that Apple’s custom ICs will have an equivalent ‘sales value’ of $10,040 million in 2020, which would place them in the 13th position in the top-15 ranking.

In order to make the year-over-year growth rate comparison more reflective of actual growth, the semiconductor sales figures for Infineon include Cypress’ sales for 2019 and 2020. Although Infineon acquired Cypress on April 16th, 2020, IC Insights added Cypress’ 2019 IC sales of $2,205 million to Infineon’s 2019 semiconductor sales of $8,933 for a total of $11,138m.

The top-15 ranking includes pure-play foundry TSMC, which is forecast to register a strong 31% 2020/2019 jump in revenue. Much of TSMC’s increase is due to a surge in sales of its 5nm and 7nm application processors to Apple and HiSilicon for their respective smartphones. If TSMC was excluded from the list, Sony, with $9,243m in expected 2020 semiconductor sales, would be ranked 15th.

As shown in the listing, the foundries and fabless companies are identified. In the April Update to The McClean Report, marketshare rankings of IC suppliers by product type were presented and foundries were excluded from these listings.

Overall, the top-15 list shown in gigure 1 is provided as a guideline to identify which companies are the leading semiconductor suppliers, whether they are IDMs, fabless companies, or foundries.

Read more
Analysis
Global 5G coverage to grow by 253% in five years
Analysis
2021 technology predictions: acceleration and innovation
Analysis
Printed sensors required for wearable skin patches
Analysis
Transparent electronics: $20bn market comes into sight
Analysis
IDTechEx highlights 2020: energy storage research
Analysis
What will the long-term industry effects of COVID-19 be?
Analysis
What To Expect From the IC Industry in 2021
Analysis
5G in 2020: highlights from IDTechEx
Analysis
The implications of regulations on Li-ion sustainability
Analysis
What 2020 taught us and where 2021 is taking us
Analysis
Foundry to account for 34% of total semi capex in 2020
Analysis
Distribution industry top brass optimistic for 2021