Industry optimistic despite sales slow down

Many years ago, on hearing of another optimistic forecast that predicted a first half downturn would be followed by a second half upturn, Jean-Phillipe Dauvin, a respected forecaster of the semiconductor industry, drily observed, “In my next life I will only live in the second half of the year”. Well we’re at it again with seasoned observers reckoning the industry will not enter a third successive quarter in retreat, writes Mick Elliott.  Michael Long, President and Chief Executive Officer of Arrow Electronics thinks the downturn will be restricted to two quarters.

Market research outfit IC Insights agrees. The company says it has looked back through the statistics and cannot identify a period when the semiconductor market declined for more than three quarters on the bounce. Its headline reads “After 2Q Bottom Expectations Increase for a 3Q19 IC Market Rebound”.

I have a problem with this. How do you predict a market when there is so much unpredictability in the world? The US/China trade war lingers on. Neither side can afford that, neither side wants to back down. The Brexit fiasco continues to dominate European politics and business.

Steve Rawlins, Chief Executive Officer of UK distributor Anglia sounded pretty gloomy about prospects. “Flat at best to the end of the year,” is his verdict, noting that the UK’s distributor association ecsn/afdec had cut its growth forecast from 8% to 1% to 3%.

The rapidity of the downturn has also exacerbated the situation. Going into the last quarter of 2018 products, especially passives, were in short supply and anxious buyers stocked up to overcome shortages. When things went south through Q1 this year, buyers put the brakes on spending to burn off what now proved to be excessive inventory levels.

Rawlins acknowledges that Anglia took a similar course, plumping up its inventory in the third quarter of last year to avoid any supply problems in case of the possibility of the UK crashing out of the EU in March.

As he points out this downturn took the industry by surprise. “There was a rapid change in the market,” he says. “In November we were preparing our 2019 budget and still looking for 10% growth.”

While not complacent, Rawlins feels 2020 will see a comeback and he is making investments to meet demand.

“We’ll continue to grow our FAE team, we’ve added two and we’re looking for eight more. And we will add some account managers. All in all we may increase headcount by 15.”

And he expects 5G and advances in car technology both electric and autonomous to come through.

The continuous development behind these technologies and the requirement for components suggest the industry could again be on the cusp of some serious long term growth.

John Macmichael, Managing Director at Solid State Supplies, agrees. “The electronics market is one market I truly believe is future-proof. There is so much potential in the electric vehicle market and 5G.”

His optimism is buoyed because he says, “Business is still very healthy. We’re still getting product out of the door, though bookings have slowed and I detect a nervousness from some customers.”

Two market sectors give cause for optimism. “The medical market is still looking strong and we are seeing activity in the military market,” he indicates. “A number of new projects are getting under way. I think some of that is the UK meeting its NATO obligations, and maybe Brexit is forcing us think harder about defence.”

“Inventory burn off and a memory pricing decline are the key factors behind the market fall,” says Nigel Watts, Managing Director of Ismosys.

He then, counterintuitively, reveals April and May were excellent months for the company.

“Have I found a niche?” he questions. “Probably not but I do have an array of products and technology now.”

And Watts is optimistic about the future. He agrees with Arrow’s Michael Long. “This is a market correction,” Watts asserts, “and when you move to the long term the prospect is we will see a rise not matched since 2000.”

“Look at the opportunities,” he insists. “Vodafone and EE are rolling out 5G, autonomous cars, think of the technology and components needed to make that work. And we are more and more moving to a connected world.”

“Right now less than one per cent of the world is connected, by 2030 we will all be living in a connected world and the semiconductor market could be worth $900bn.”

He is optimistic in the shorter term that European sales will grow, though the region will become a smaller percentage of global sales as it is overtaken by other regions. The UK picture is not so rosy he reckons, as the country’s manufacturing base shrinks and services will represent 80% of GDP. 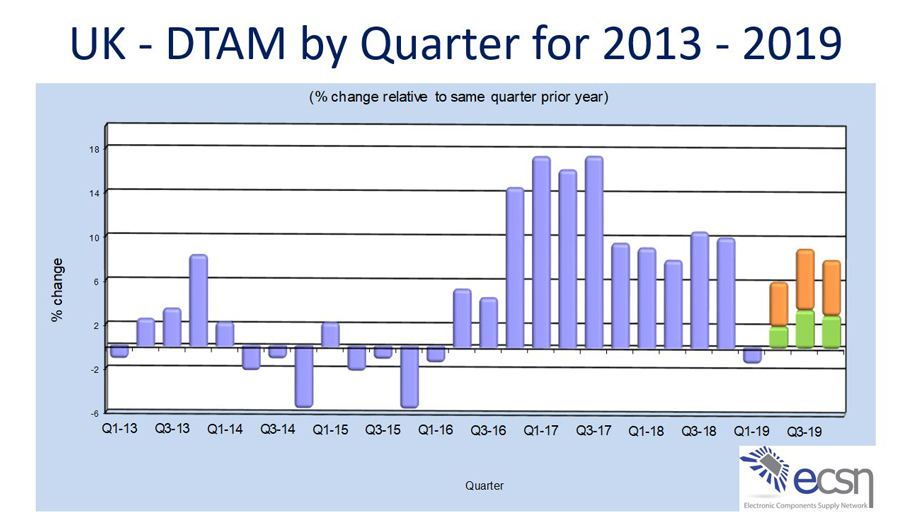 He does cite one cause for optimism - “what is impressive is the number of energetic, entrepreneurial and innovative start-ups that have emerged in the UK,” says Watts. “Of course they learn fast and once business rises to a certain volume they take manufacturing offshore.”

That needs to change, we need to encourage companies to keep manufacturing in the UK by offering incentives, easier negotiation and emphasising how important it is to have product manufactured on your own doorstep.”

With customers uncertain whether they may have to pass a 25% tariff on to their end customers, it is difficult to forecast demand for semiconductors, and as Sanghi rightly points out, “The world economy largely runs on people building to forecast.”

Dave Pahl, Senior Vice President of Investor Relations at Texas Instruments was explicit. “The weakness in demand that began in the second half of 2018 continued into the first quarter. The weakness was across all markets with the exception of communications equipment. In our core businesses, analogue revenue declined 2% and embedded processing revenue declined 14% compared to the same quarter a year ago. Both businesses’ year-on-year growth decelerated as we expected at this point in the cycle,” he told analysts.

He declined to call the bottom of the market.

“We stay out of the game of calling the bottom or predicting how long the cycle will last. And we pay attention to it and operate inside of that. But our thesis on the products and the markets we’re investing in on a three and five-year horizon remain unchanged and we’re keeping our nose down and grinding away,” Pahl commented.

Still it’s not all doom and gloom. According to DMASS (Distributors and Manufacturers Association of Semiconductor Suppliers) European semiconductor distribution sales grew by 8.4% to €2.5bn, an all-time record in the first quarter of 2019. 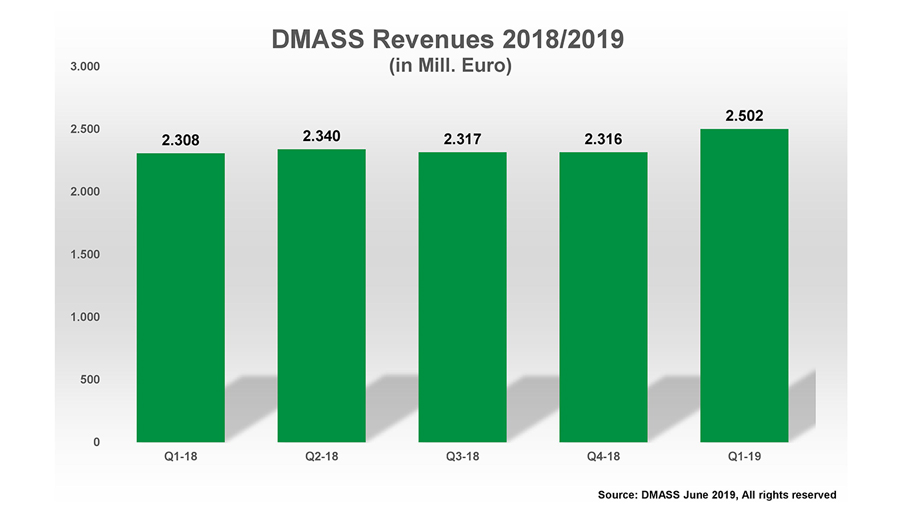 A pleasantly surprised DMASS chairman, Georg Steinberger, commented: “It is amazing that our industry could deliver another record, after eight quarters solidly above two billion Euro of consolidated sales. We recognise the fact that much of the current growth is driven from a solid backlog and expect the growth to come down through the year, as many members see the booking situation weakening as we speak.”

However, a note of caution is required. Growth across Europe was uneven - the industrial power houses of Germany, Italy, France and the UK struggled to hit the average growth, while Scandinavia resoundingly and East Europe, just about, recorded double digit increases.

Said Steinberger: “The numbers show some unusual effects in various countries with a significant contract manufacturing business, but in general it looks like the major economies are absorbing the lion’s share of the current slowdown effects. If this is a trend for the rest of the year remains to be seen.”

On the product front, the major growth came in selective product areas like Discretes, Power, Sensors, Memories and Other Logic, but not across all countries.

Putting a dampener on this optimism is the Semiconductor Industry Association worldwide semiconductor sales of $32.1bn in April, a plunge of 14.6% from April 2018 and 0.4% less than the March 2019 total of $32.3bn. A newly released WSTS (World Semiconductor Trade Statistics) industry forecast projects annual global sales will decrease 12.1% in 2019, then increase 5.4% in 2020.