In 1970 Intel introduced the first DRAM device. Now forty-three years later, the DRAM market has finally matured to the point where there are only three major suppliers remaining - Samsung, SK Hynix, and Micron (which recently closed on its acquisition of Elpida). According to IC Insights’ Mid-Year Update to The McClean Report 2013, a good sign that the DRAM market has reached maturity is that capital expenditures in 2013 are forecast to be $4.0 billion. This is only slightly more than the $3.9 billion spent during the great recession year of 2009. 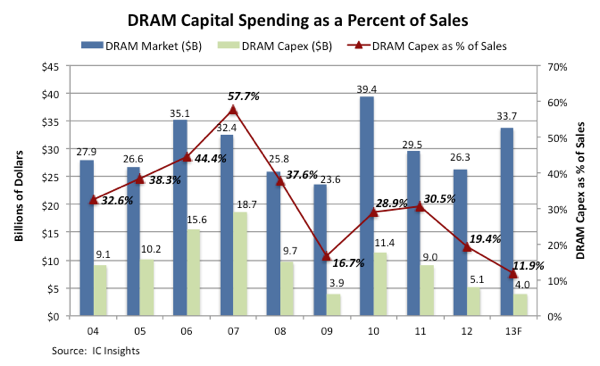 The ability of suppliers to spend large sums of money to build a brand new wafer fab or to upgrade existing fabs has become nearly prohibitive for all but the leading DRAM manufacturers.  With the price of a new wafer fab approaching $5 billion, only Samsung, SK Hynix, and the new Micron-Elpida will be able to continue investing in new and/or upgraded facilities this year.

Samsung perennially has had the DRAM industry’s largest capital expenditure budget, which has allowed it to reduce costs and offer advanced products more quickly than its competition.  From 2010-2013, Samsung’s cumulative four-year DRAM capital spending ($10.95 billion) is forecast to far exceed the amount spent by either of its two nearest rivals—SK Hynix, $6.1 billion; and Micron, $5.1 billion—over the same period. (DRAM capex by the newly formed Micron-Elpida venture amounts to approximately $7.8 billion over the four-year span).

Perhaps more telling is how quickly the level of DRAM capex spending falls off after SK Hynix and Micron. After investing heavily to bring 50nm- and 40nm-class processes to their 300mm wafer lines, Taiwan-based suppliers are out of cash. Facing intense pressure from the world’s leading DRAM vendors, second-tier players like Nanya, Powerchip, and Winbond are having to look for niche markets in order to revive their respective IC businesses.

In the five-year span from 2004-2008, DRAM capital expenditures as a percent of sales averaged 42.1%. In contrast, that ratio over the five-year span from 2009-2013 is forecast to average 21.5%. Since only the top DRAM suppliers will be able to continue investing in new facilities, IC Insights forecasts the ratio of DRAM capex to sales to be in the 15-20% range through 2017, greatly reducing the potential for huge swings in the market based on too much or too little capacity in the system.