The first half of 2019 recorded an increase in healthtech M&A activity, with a healthy 100 deals inked (11% more than in 2H 2018) and around $8.3bn in disclosed transaction value throughout the period, reveals Hampleton Partners in its latest global Healthtech M&A Market Report.

Trailing 30-month median valuation multiples reached the highest levels in years, with EV/EBITDA climbing to 17.7x after the low of 13.7x in 2H 2018, and EV/S reaching 3.4x – a new record for healthtech.

Jonathan Simnett, Director and Healthtech Specialist, Hampleton Partners, said: “M&A activity in the healthtech sector underlines a pressing imperative: to deliver better healthcare, cheaper, against the backdrop of an ageing population, data protection and the pressures of cost-efficiency.

“As a result, many acquisitions have targeted companies focused on preventative medicine software and technology which can help detect anomalies early and avoid later-stage, costly emergency treatments; and software aiding efficient personnel, equipment and facilities allocation and accurate payment processing.”

Financial buyers constitute over a third of all acquisitions

In 1H 2019, 38% of acquisitions were made by financial buyers – a proportion consistent with the share seen in previous reporting periods, which have swayed between 29 and 42%.

Several of these financial buyers made acquisitions with a preference for medical records and healthcare data management software; clinical management and analysis SaaS; and online health services.

Meanwhile, there are currently 38 VC-backed digital health unicorns worldwide, worth a combined total of $90.7bn. The cohort’s total valuation in 2019 continues to grow as a result of continued mega-rounds to existing unicorns such as Tempus, which completed a $200m Series F round, and Doctolib, which raised $165m in a Series E round led by growth equity firm General Atlantic.

Simnett concluded: “We expect healthtech to remain a strong sector with continued M&A activity in the near future, as financial and strategic buyers invest and acquire in order to enter the healthtech space, expand their own product range or simply to seize the opportunity of innovative healthtech solutions which are likely to appeal to a wide range of healthcare systems and providers.” 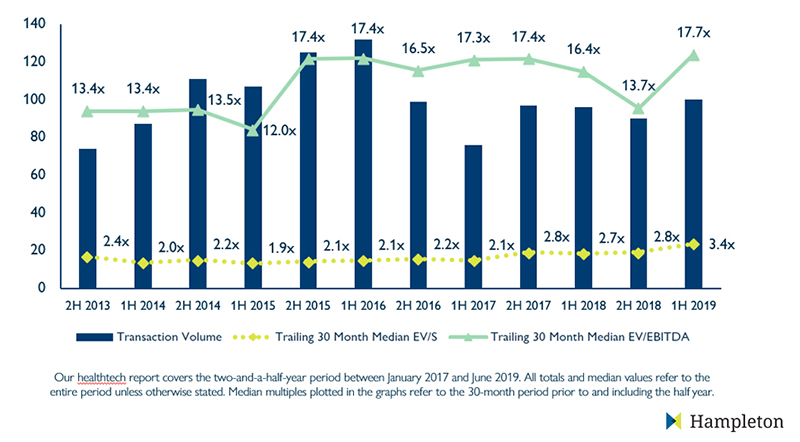