IC Insights is updating its comprehensive forecasts and analyses of the IC industry for its 24th edition of The McClean Report, which will be released in January 2021. Included in the report is a historical review of capital spending and forecast spending rates for leading IC product categories.

The foundry segment is forecast to represent 34% of semiconductor capital spending in 2020, the largest portion of all product/segment types. Foundry also held the largest share of spending in 2014, 2015, 2016, and 2019. 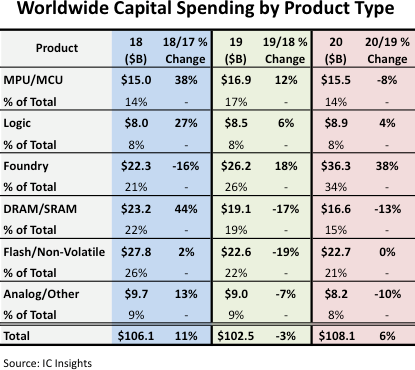 With a focus on being the leading provider of 7/5nm process technology, TSMC accounted for essentially all of the increase in foundry capital expenditures in 2019.  In 2020, IC Insights expects SMIC to represent 39% of the foundry segment’s forecasted $10.1bn increase in spending with TSMC representing 20% of the increase.

Foundry is also expected to post the largest percentage increase in capital spending at 38% this year, with the next highest rate expected to be registered by the logic segment with only a 4% increase.

The segment with the second-most spending in 2020 is forecast to be the Flash/Non-Volatile memory category. The vast majority of this spending is for 3D NAND technology advancement. Spending for the Flash/Non-Volatile segment is forecast to be flat at $22.7bn this year, which is 18% less than the $27.8bn spent in 2018, the peak year for expenditures in this product category. Spending for flash memory is expected to be 37% greater than the outlays forecast for the DRAM segment in 2020.

In 2017 and 2018, DRAM suppliers invested heavily in new fabs and equipment for sub-20nm process technology needed to manufacture next-generation devices. DRAM capex increased 79% in 2017 and 44% in 2018. With the build out largely completed, DRAM capital spending fell 17% in 2019 and is expected to decline another 13% in 2020. Despite the reduced spending on DRAM this year, Samsung, SK Hynix, and Micron are still expected to be ranked among the top five largest capex spenders for 2020.

The IC industry has been one of the most resilient markets during this COVID-19 plagued year. Although causing a deep global recession in 2020, the COVID-19 pandemic accelerated a global digital transformation resulting in 21 of 33 IC product categories that survived (and even thrived) with positive growth this year, and a six percent boost in semiconductor capital spending.

With the promise of a vaccine being developed and administered worldwide next year, a strong global GDP rebound and double-digit IC market increase are forecast for 2021.