The COVID-19 Pandemic had a significant impact on the European electronic components DTAM (Distributor Total Available Market), according to Adam Fletcher, Chairman of the International Distributors of Electronics Association (IDEA).

Consolidated returns from the association’s member companies reveal that average ‘Bookings’ declined significantly compared to the previous quarter. European ‘Billings’ also declined in the period, but at a slower pace than ‘Bookings’: “Whilst these results can hardly be considered good news it’s apparent that the European electronic components markets held up reasonably well in Q2’20 compared to many other markets, underlying the increasing importance of the electronics industry to daily life.

“IDEA members are now forecasting a return to growth into the second half of 2020 and beyond,  assuming that there are no further widespread COVID-19 population lockdowns.”

Each month IDEA collates the statistical data reported by its member associations throughout Europe, and then consolidates and publishes it as headline information. IDEA uses three primary metrics in the reporting process: ‘Billings’ (sales revenue invoiced, less credits), ‘Bookings’ (net new orders entered), and the ratio of the two known as the ‘Book to Bill’ (or B2B) ratio.

All three metrics are important, but the consolidated ‘Billings’ number is possibly the most critical: “The Billings metric is the most accurate indicator of the performance of all organisations operating in the market,” said Fletcher. “Organisations are able to use this figure to compare their actual operating performance with the market’s average sales revenue performance”.

The data presented in the following graphics is shown in K€ Euros and where necessary, has been converted from local currencies at a fixed exchange rate for the year.

Graphic T1 is a visual representation of twelve quarters of consolidated ‘Billings’ and ‘Bookings’ for European electronic components markets, together with the corresponding ‘Book-to-Bill’ (B2B) ratios. A positive B2B number - i.e. greater than 1 – indicates growth but a number below 1 is evidence of a decline. 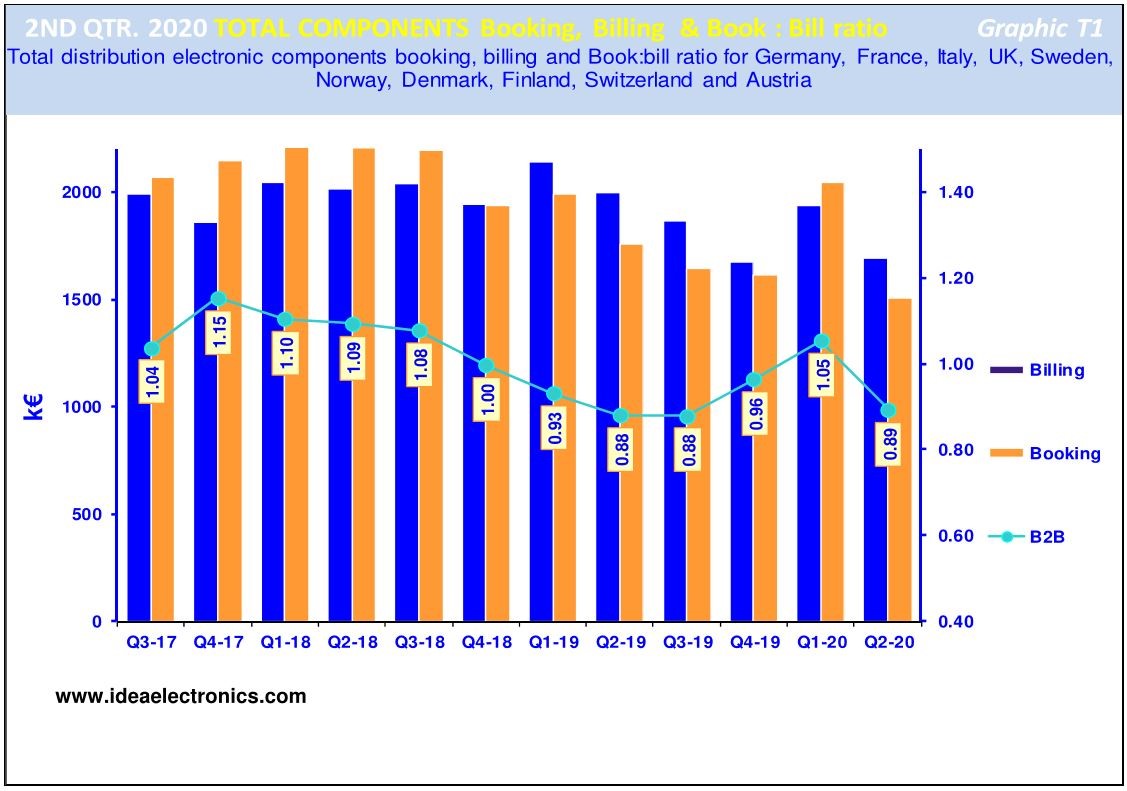 A quick glance at the chart suggests that there was a significant decline in growth in both Bookings and Billings in the second quarter of 2020, primarily related to the global population lockdowns. but the European electronic components market held up reasonably well given the scale of global economic damage the pandemic caused.

The rapid decline in the B2B ratio to 0.89:1 however, confirms that customers were generally allowing their order cover to lapse in Q2’20 in response to widespread market uncertainties and little visibility from their customers. 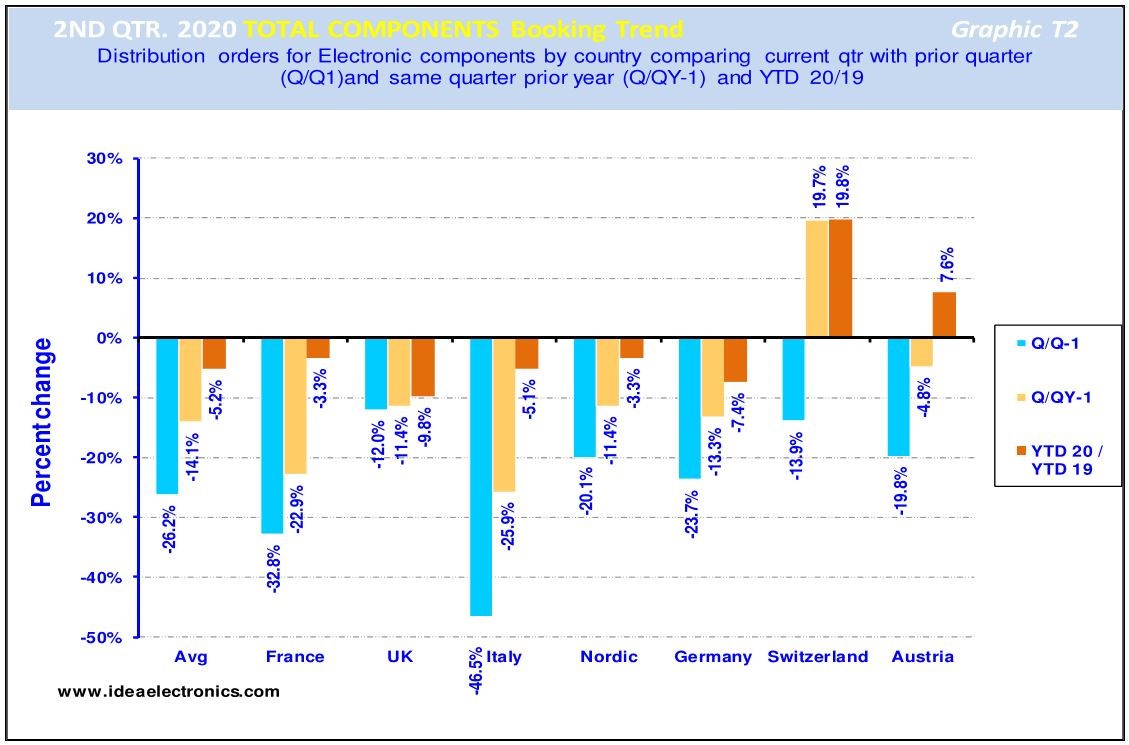 The blue bar reveals that on average European ‘Bookings’ declined by (26%) in Q2’20 when compared to the previous quarter.

The light brown bar compares ‘Bookings’ growth by country in Q2’20 with those in the same quarter 2019 and indicates that on average ‘Bookings’ declined by (14%) in this period.

The dark brown bar compares average ‘Bookings’ achieved in Europe year-to-date with the same period in 2019, revealing that the average Bookings growth rate declined by (5%) across Europe over the 12-month period, further evidence of European customers’ reluctance t’o put order cover in place.

Graphic T3 illustrates total electronic components ‘Billings’ achieved in European markets in Q2’20 and contrasts and compares the results with the previous quarter's results and those achieved in the same period last year. 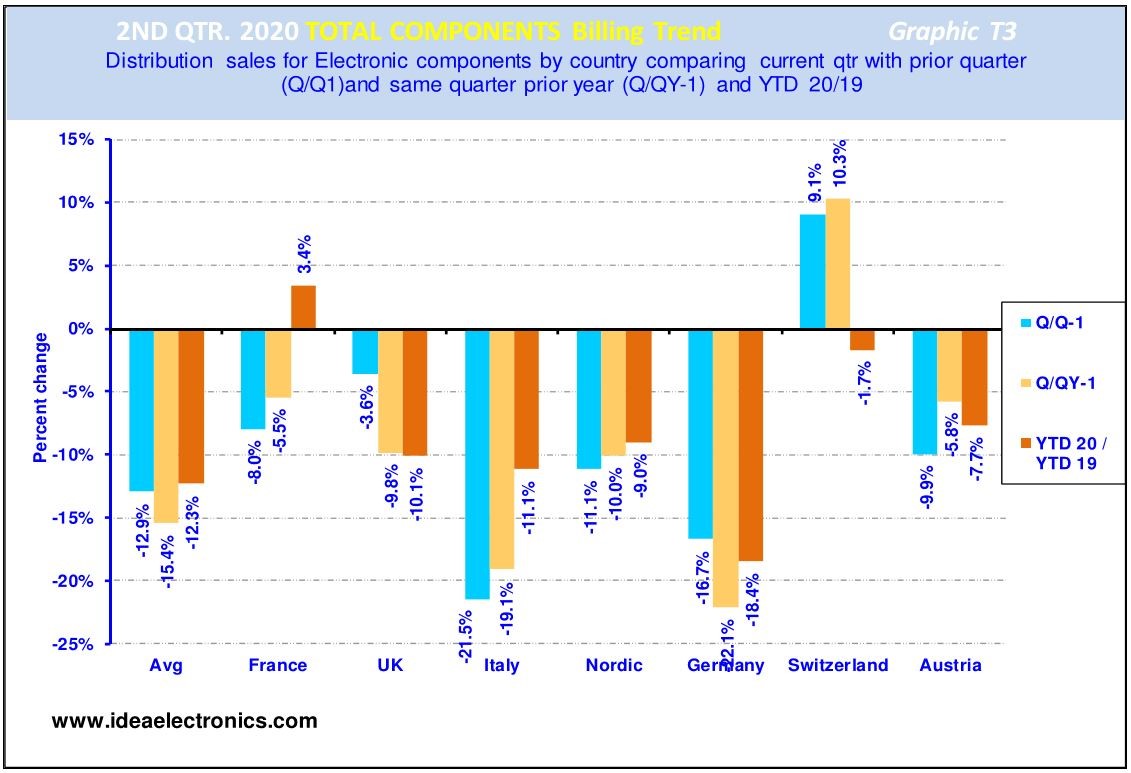 The blue bars reveal that European electronic components markets experienced an average decline of (13%) in Q2’20 compared to the previous quarter.

The light brown bars compare Q2’20 with the same quarter last year and shows that European electronic components markets suffered in the quarter year-on-year, with an average decline of (15%).

The dark brown bars compare current YTD ‘Billings’ with the same period 2019, revealing an average decline of (12%) across European electronic components markets. This is a particularly disappointing result given that Q2 is historically a high growth period in European markets. IDEA members however believe that Q2 ’20 is likely to be the low point in the current economic cycle, unless there are further widespread population lockdowns caused by the COVID-19 pandemic.