In the last several months production of electronics has been accelerating, contributing to strong growth in the semiconductor market. China, the largest producer of electronics, has seen three-month-average change versus a year ago (3/12 change) accelerate from below ten percent for most of 2016 to 14.5% in April 2017. China’s April growth rate is the highest in over five years. United States electronics production 3/12 change has been over five percent since December 2016.

According to data from World Semiconductor Trade Statistics (WSTS), semiconductor market 3/12 change has accelerated dramatically over the last year from a seven percent decline in May 2016 to 21% growth in April 2017. Accelerating electronics production has driven much of the semiconductor growth. Other driving factors are rising memory prices and inventory restocking. 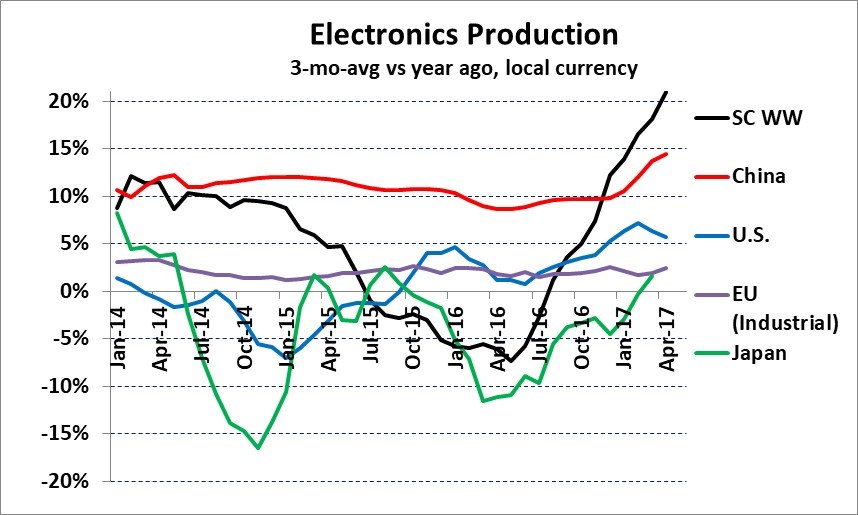 Although China is the dominant Asian electronics producer, other counties play a significant role. Electronics production 3/12 change over the last year shows a mixed picture. Vietnam and India are significant emerging electronics producers. However, over the last year the 3/12 change for each country has decelerated from over 20% to about two percent in April 2017. Malaysia has shown steady growth in the six percent to eight percent range. Thailand has bounced back from declines of five percent to eight percent a year ago to double digit growth in each of the last two months. 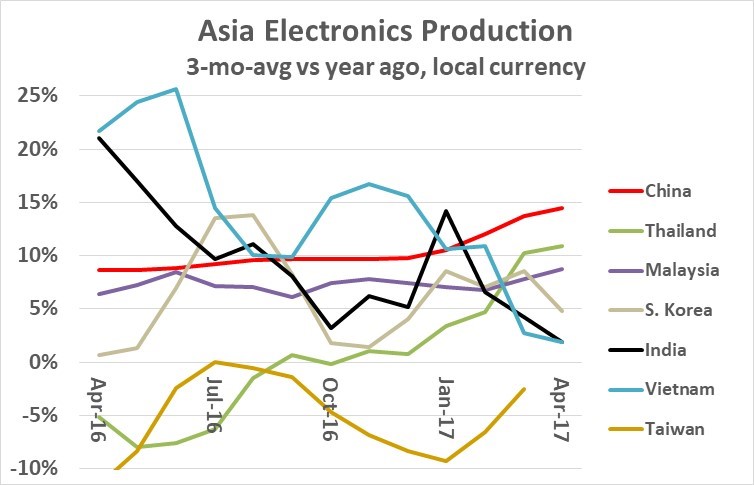 South Korea and Taiwan have been historically significant electronics producers. South Korea has shown positive 3/12 change for the last 20 months after 12 months of decline in late 2014 to late 2015. Taiwan has been weak over the last couple of years, with 3/12 declines since April 2015. Taiwan has been the among the hardest hit countries with the shift of electronics manufacturing to China. In many cases, it has been Taiwan-based companies behind the shifts.

The table below shows average hourly manufacturing compensations costs (wages + benefits) by key countries. Location of electronics production is dependent on several factors, but compensation costs are a major consideration for labor intensive, low-skilled manufacturing. The US, Euro Area, Japan and South Korea are high cost areas with compensation costs over $20 per hour. Taiwan is trending toward high cost at about $10 per hour. China at $3.52 per hour is low cost compared to the above countries. However, Vietnam and India at about $1 per hour have costs less than one third of China’s. Thus India and Vietnam electronics manufacturing should grow faster than China over the next several years. 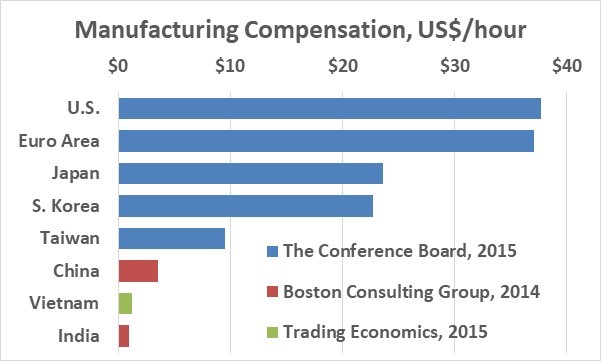