In its Mid-Year Update to The McClean Report 2017, which originally was published in January 2017, IC Insights has revised its outlook and analysis of the IC industry and presented its new findings. Among the revisions is a complete update of forecast growth rates of the 33 main product categories classified by the World Semiconductor Trade Statistics organisation (WSTS). Figure 1 shows the complete ranking of IC products by forecasted growth rate for 2017.

Topping the chart of fastest-growing products is DRAM, which comes as no surprise given the strong rise of average selling prices in this segment throughout the first half of 2017. IC Insights now expects the DRAM market to increase 55% in 2017 and lay claim as the fastest-growing IC product segment this year. This is not unfamiliar territory for the DRAM market. It was also the fastest-growing IC segment in 2013 and 2014. Remarkably, DRAM has been at the top and near the bottom of this list over the past five years, demonstrating its extremely volatile nature (Figure 2).

Additional details and discussion regarding the updated IC forecasts for the 2017-2021 timeperiod are covered in IC Insights’ Mid-Year Update to The McClean Report 2017. 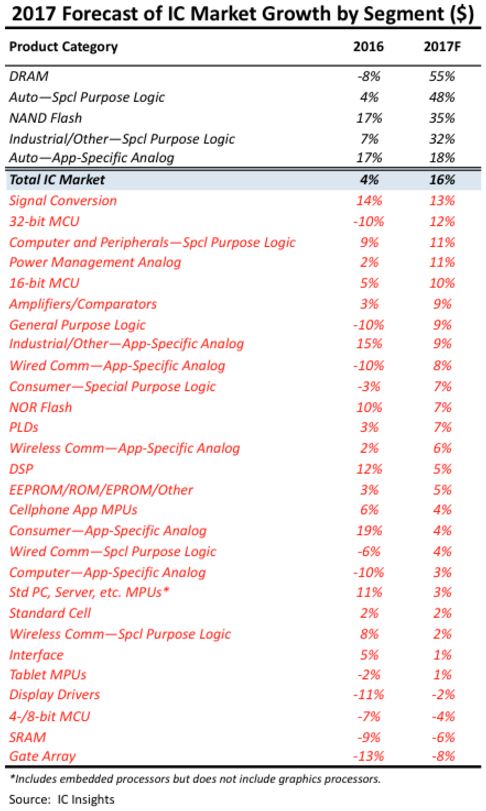