“Demand in China has cooled off, the rest of Asia-Pacific is holding up, and the US is improving.”

Europe’s progress is patchy. “We’ve been buoyed by improvements in Nordic, east Europe and some recovery in Germany,” said Rospedzihowski. “Emerging markets including Turkey and South Africa are also contributing well.”

He added that uncertainty is holding back recovery in the UK – “COVID-19 and Brexit.”

It is a view supported by Steve Rawlins, CEO at Anglia. “Demand in the UK is still subdued,” he summarised.

He estimates Anglia sales will be between ten to 15% down on 2019, exacerbated by tumbling memory prices.

Thankful at least for that small mercy, Rawlins also reported that none of his customers, which tend to be small to medium size enterprises, had gone under, and that Anglia has all its staff back at work with no redundancies – “unlike some of our competitors,” Rawlins observed.

“We are seeing big demand from Asia, even though Anglia doesn’t support this market,” he added. “They are usually eight weeks in front of us so we will see if that pertains and demand surges in Europe in November. According to some of semiconductor suppliers European automotive makers are gearing up. Production is close to 90% of capacity.”

“The market pick up has not happened as fast as we hoped,” he revealed, though a recent bookings uptick gives him some optimism. “5G and IoT products like sensors, antennas are giving business some impetus, and the medical market which started a growth spurt at the beginning of the pandemic has stayed strong.”

“In Europe bookings are pretty much flat against last year. Globally Mouser is four percent up on plan fuelled by the Asia-Pacific region which is 14% ahead of plan.”

“The good news is that new customers are signing up,” Maggs continued. “Our target was customer growth of seven to eight percent this year, and we’re nearly at ten percent. It’s professional engineers working from home as well not just hobbyists, makers and academia.”

“Our customer base has expanded into new market territories. Some customers have gone quiet in these difficult times, others have increased business including medical, security and surveillance. There has been special interest in sensors and camera equipment,” he said.

CPC, Farnell’s sister company has been prominent in supplying Personal Protection Equipment and 3D printers. The company won what Rospedzihowski described as “a fabulous customer testimonial” after working round the clock to deliver medical equipment to a hospital in Holland, ahead of a visit by Queen Maxima.

Other elements are at play in the distribution sector.

“Besides Covid-19, you also see some special effects of product categories slowly deteriorating – arguably legacy technologies like SRAMs and EEPROMs – or disappearing from distribution as an effect of suppliers taking some business direct, like Digital Signal Processors (DSPs),” said Georg Steinberger, chairman of DMASS. “But none of those have a major effect on the totals. However, the fact that standard products are suffering more than expensive specialties is strange, as the financial risk on the customer side is rather low. We will see how this pushback on standard products develops, once the market turns around.”

2020 will be a year of significant double-digit decline, “whether we like it or not”, according to Steinberger, “and it could, no, should be the beginning of a reassessment of how we operate as an industry and at a larger scale, as society in general. It is clear that resources become scarcer and the throwaway mentality of the last 50 years will lead to disaster. Technology can play a major part in recreating a sustainable world, but as we can see by its interrupted supply chain, it is also part of the current problem. The big question is: how can the significant influence of technology be used to make changes to a sustainable better world? Can it?”

On a more positive note design activity is holding up well.

Arrow Electronics has been adding to its engineering and sales teams as it positions itself for sales growth.

“We can't control the demand for cars, data centre equipment or electronic devices. However, we can continue to position our business for rapid sales acceleration and mix shift to higher-margin engineered components and solutions,” Arrow President and CEO Michael Long told analysts. “One way we're doing that is by adding to our engineering and our sales teams today. We've seen great opportunity to drive leverage from design, engineering and marketing that will benefit our customers and suppliers.

“Design activity reached an all-time record for any quarter in our history, and our design activity has actually increased year-over-year for the third quarter in a row,” he added. “Typically, this is a good leading indicator of an improving market, and this is why we keep investing in our engineering capabilities.”

He said that the company had seen a steady increase in bookings.

Avnet Interim CEO Phil Gallagher agrees. He told analysts, “Demand creation continues to move at a really good pace and is holding steady, both on design registrations and actual design-in and design win production. So we’re actually very pleased. I have to say probably somewhat surprised with not going to go kind of hand to hand, if you will, with the FAEs and to the customers.”

But with the remote capabilities now, we’ve actually had really good success in work,” he continued. “The trend is steady as she goes and demand creation and design wins, which is terrific. It’s actually holding up better than the core.”

“Engineers are continuing to undertake designs and are still looking for new products for designs.”

“Online demand has increased,” reported Rob Rospedzihowski. “Online business is now in the high 80s to low 90s. In six countries in Nordic and southern Europe it is above 90% of business. Overall it stands at 86%.”

Home working has also meant a change in order patterns. Typically most high service distributors see steady order patterns through the day and then a spurt in late afternoon, early evening.

Rospedzihowski said: “It is more spread out. We have even had orders being placed at midnight and the early hours of the morning.”

A positive note is struck by Malcom Penn, CEO and Founder of Future Horizons. He is forecasting a four percent global semiconductor growth in 2020, followed by a 12% increase in 2021 to $480bn. As distributors typically represent 30% to 35% of global semiconductor sales this is a healthy chunk of money. 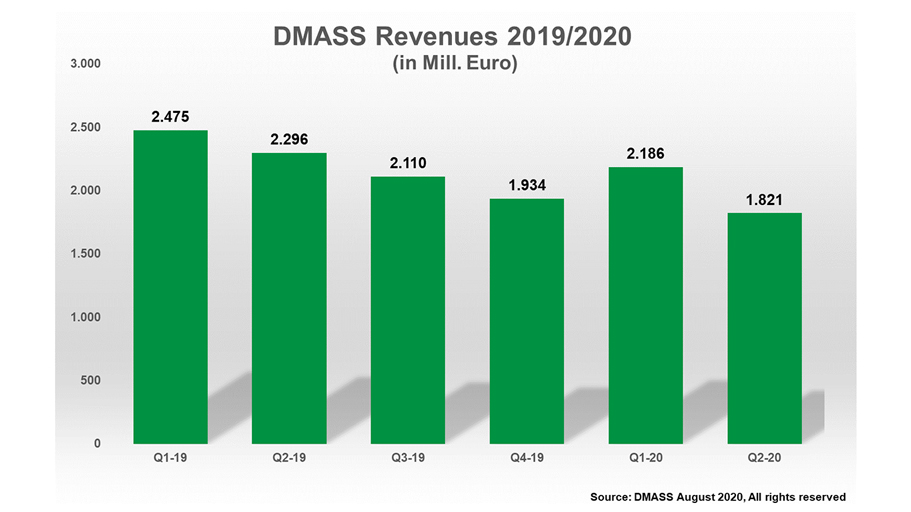 For only the third time, the semiconductor market will not follow global GDP into decline.

“Global GDP is forecast to be minus 4.8% in 2020 and usually economic downturns take the semiconductor market with it,” said Penn. “This time, the semiconductor industry didn’t blink. Momentum slowed, but it resembles a traffic accident where everything stops and then recovers when the wreckage has been cleared.”

Penn predicts Q3 will see the market climb eight percent followed by a 2.5% decline in Q4.

“If Q4 is robust we will be OK, if it is weaker, that could impact Q1 next year.”

His forecast is buoyed by a sharp eight percent rise in wafer substrates in the second quarter of this year.

“That has pushed on into Q3,” said Penn, “and manufacturers only buy substrates to make ICs.”

There are lurking dangers to this optimistic scenario.

If this double whammy hits, it will have a severe impact on revenue potential and transform 12% growth into a 12% decline.

“We will either go through the roof or go bust,” remarked Penn.

There has been one irritating trend during the COVID-19 pandemic according to the CEO of one distributor, and not one of those quoted above.

“It’s the bandwidth restriction being caused by lines panicking over our mindshare. They are taking up far too much of our time on reviews and training calls in an attempt to convince themselves that they still have our attention. They would be better off leaving us alone to contact customers and drive revenue on their behalf which is why they engaged us in the first place.”