Last month, Hardware Pioneers invited Gareth Sumner, Foresight Manager, Transport for London (TfL) to give a presentation on ‘The Future of Smart Transportation’. Sumner’s talk was centred on a sketch he drew six months ago. With large green spaces, families playing in the park, and numerous bicycles on the road, this image is TfL’s vision of a liveable London. Sumner is conscious that this transformation will not occur unaided. Indeed: “In order to make this a reality, we need engineers,” he said.

Currently, London is busy and congested. The city still hasn’t completely solved its air quality issue and these problems will keep on growing as London itself increases in size. Sumner stated that there are 8.7 million people living in London now, and by 2030 that figure is predicted to rise to ten million. That is the equivalent of two full tubes of people arriving in London every week, and not going anywhere.

As a result of this population increase, there will be five million extra trips on public transport every day. Sumner stressed that we must do something about this. If not, despite how bad congestion is now, it’s just going to get worse in the future.

What is the solution?
While TfL wants to create cleaner cars and higher capacity transport, Sumner stressed that the organisation has to think about things differently.

One way TfL is ‘thinking differently’ is with the introduction of its Healthy Streets initiative. Launched a year ago by Sadiq Khan, the programme aims to get more people walking and cycling and spending more time on the streets.

The Healthy Streets initiative is also embedded into the Mayor’s Transport Strategy (MTS). The way TfL approaches technology and innovation is described in Policy 21 of the MTS.

Criteria – Policy 21
The Mayor, through TfL, will manage new transport services in London so that they support the Healthy Streets Approach, guided by the following principles:

A. Supporting mode shift away from car travel

B. Complementing the public transport system

C. Opening travel to all – not just focussing on those who can pay to use the public transport system

E. Creating a safe, attractive environment on our streets 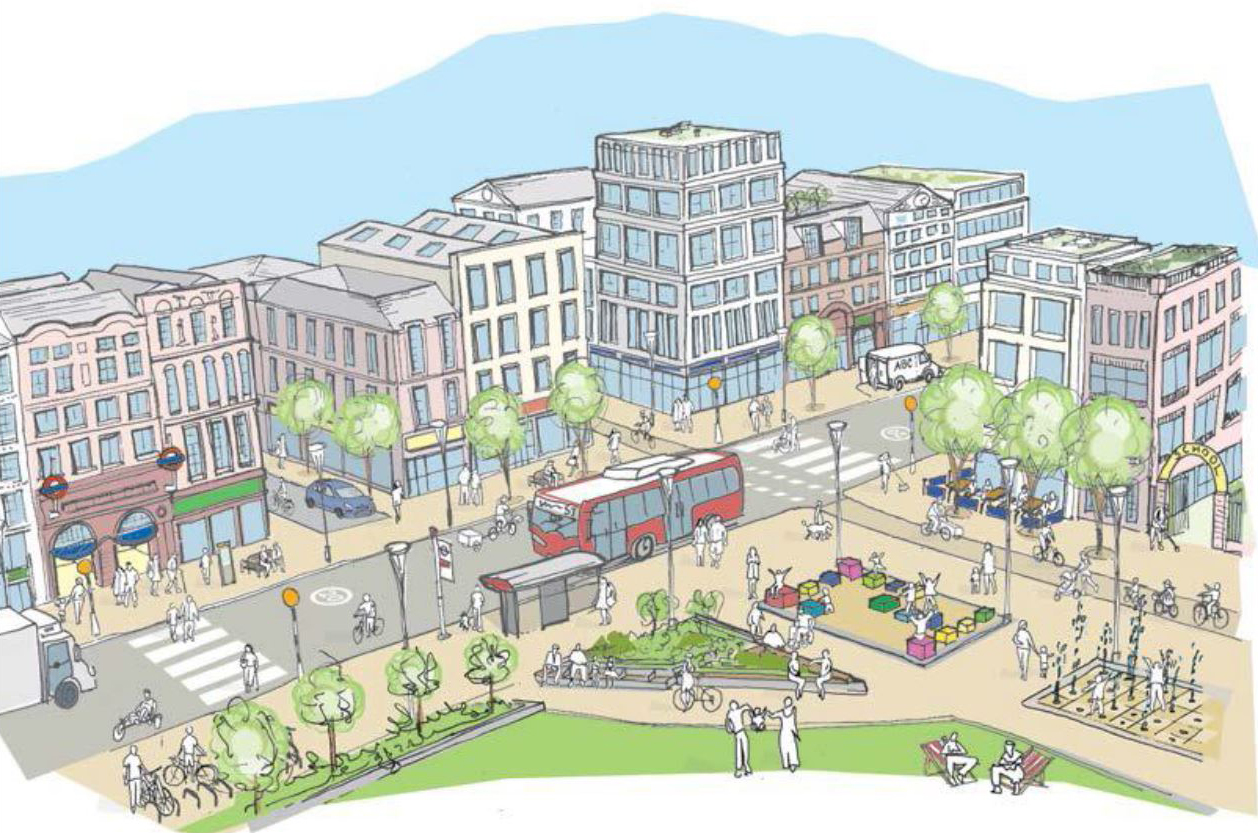 Now we know which principles TfL follows, why is Sumner’s original sketch so important? He explained that the image provides: “A pretty good summing up of what the MTS is trying to do.” It showcases the vision TfL wants to try to achieve, which it believes will create a much more liveable city.

Interestingly, despite only being created six months ago, there is no technology in the sketch.

What type of innovations do we need to progress towards this vision of a liveable London?
In order to be successful, innovation requires at least three things. Firstly, the people and consumers buying – and hence accepting – it. Secondly, it requires innovative technologies. Finally, it needs the infrastructure to make it a reality. Innovation certainly doesn’t happen in a vacuum.

Sumner then explained some of the ideas and technologies that are emerging and may help or hinder the achievement of TfL’s vision.

People
As London continues to grow and get more densely populated, more people are physically going to be using the streets, so TfL needs to think of that impact.

Additionally, convenience culture continues to grow. People want things now, and want those things brought straight to them. Sumner explained the impact: “While this is great for the consumer, it’s not so great for the streets. It results in more congestion.”

Finally there is the question of connectivity. People are almost always connected to the internet, and we are used to receiving data now. This is having a huge impact on the environment we live in.

What about the people themselves? Sumner highlighted the distinction between the elderly and ‘digital natives’ in society.

“The baby boomer generation has basically created the world we live in today (in terms of the internet and technology). As they are getting older and starting to retire, they’ll have much more disposable income than generations before them. Equally, they’ll have new needs. Because it is designed for everyone, Healthy Streets works quite well for them,” explained Sumner.

While the Healthy Streets initiative seems to be suitable for the baby boomer generation, it is hard to know what it will mean for the next generation. Will the streets perform for them, or will we have to look at them in a different way?

Additionally, Sumner discussed autonomous vehicles. While they provide strategic benefits such as making better use of road space and getting more people mobile, what does this mean at a granular level? How does the car communicate with pedestrians?

Looking into the future, Sumner presented a range of futuristic innovations that have already been developed or tested in London or another city.

One such innovation is payment delivery robots. Being proposed and tested by the private sector in London, these compact robots carry small value goods, such as shopping bags or a takeaway, on the pavements. 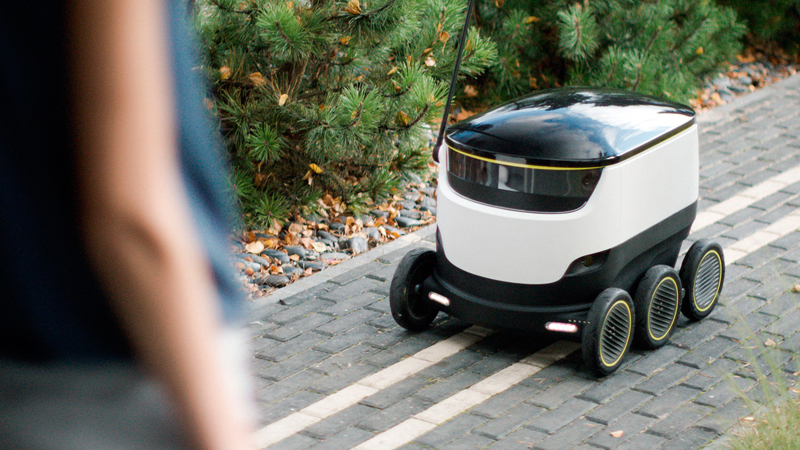 “At first glance these don’t appear to do much to get people walking and cycling, and they take up space used by pedestrians. However, if shaped and developed in the right way, so that they are safe and don’t endanger pedestrians, maybe using these robots could mean we can close a road, because it doesn’t need to have delivery vehicles on it anymore, maybe this means we can have more pedestrian spaces,” enthused Sumner.

Another innovation would be personal mobility devices, for example Segway scooters. Again, these do not directly promote healthy streets, but if people can’t get onto the streets because they are less able to walk or explore places on their own, these types of technologies could help them get onto the road, whereas otherwise they’d be unable to.

This doesn’t mean that TfL is directly supporting either of these innovation, just that the organisation is aware of them and exploring their potential. But if such technologies and others like them happen, then TfL needs to understand how they fit in to the healthy streets vision – and how they support the six principles in Policy 21.

Supporting infrastructure
TfL is very supportive of the electric vehicle movement, and is investing a lot of money in the electric charging network. While most of this is plug-in charging, Sumner explained that they are also investing in inductive wireless charging.

Perhaps even more excitingly, Amazon has recently had a patent approved for a system where drones fly out to vehicles and recharge them while they’re driving, meaning they never have to stop at all.

While this infrastructure currently seems futuristic, Sumner emphasised that TfL must be pragmatic. “The last thing we want to do is install a network of electric charging which could become obsolete in a few years.”

Infrastructure: footways, kerbs, roads, cycle lanes
One important part of the transport infrastructure is the kerb space. Sumner explained that it is a battleground in the city; pedestrians, taxis, and buses all want kerb space.

Recently, as new players start moving into the transport market, there’s been a much wider discussion about how important the kerb space is. In the future, maybe kerb space doesn’t need to remain fixed, it could be a dynamic space.

With regards to delivery robots, promoters argue that they should be allowed on the pavement. This begs the question of what exactly the pavement is. If autonomous vehicles always give way to pedestrians, maybe we won’t need to divide the carriageway from the footway in the future. We could have a single shared space.

How do all these technologies fit into Sumner’s sketch? “We could be looking at drones delivering a takeaway to a millennial using a landing pod on a block of flats. Sounds like a great idea if you’re a millennial and want a takeaway! At TfL we have to look at this technology with Policy 21 in mind. Does that support a shift away from car travel? Maybe it does, because you normally drive to collect your takeaway. But equally, does it actually help to create more active travel? Maybe it doesn’t do that at all.”

On the other hand, if more deliveries are made by drones – particularly a wide range of deliveries - that might mean you can start to close more streets and pedestrianise them. This starts to be attractive to TfL. Sumner explained that the organisation is interested in looking at technologies and innovations and seeing how we can shape them to meet Policy 21.

In conclusion, Sumner made a final return to his sketch vision: “TfL are presented with ideas and innovations all the time, some of them are great technologies and others we are not sure about. But what we are interested in is trying to reach this vision, and any technologies that can help us get there, rather than moving away from it, the better.

Summarising his presentation, Sumner concluded: “Essentially, anything you can do to help us achieve this [points at sketch] is helpful, because we think this helps create a more liveable London.”