China to account for 90% of pure-play foundry market growth

Overall, China is forecast to be responsible for 90% of the $4.2bn increase in the total pure-play foundry market in 2018. 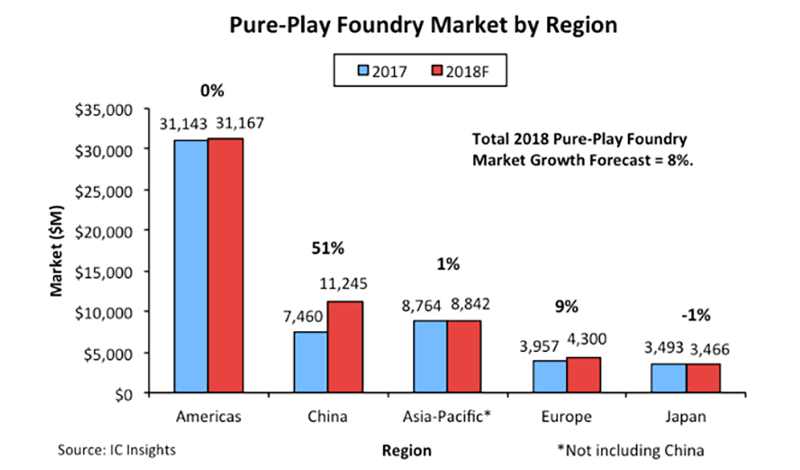 Although all of the major pure-play foundries are expected to register double-digit sales increases to China this year, the biggest increase by far is forecast to come from pure-play foundry giant TSMC. Following a 44% jump in 2017, TSMC’s sales into China are forecast to surge by another 79% in 2018 to $6.7bn. As a result, China is expected to be responsible for essentially all of TSMC’s sales increase this year with China’s share of the company’s sales more than doubling from nine percent in 2016 to 19% in 2018.

Much of TSMC’s sales surge into China has come over the past year, with 2Q18 sales into the country being almost double what they were in 3Q17. A great deal of the company’s recent sales surge into China has been driven by increased demand for custom devices going into the cryptocurrency market. It turns out that many of the large cryptocurrency fabless design firms are based in China and most of them have been turning to TSMC to produce their advanced chips for these applications. It should be noted that TSMC includes its cryptocurrency business as part of its High-Performance Computing segment. 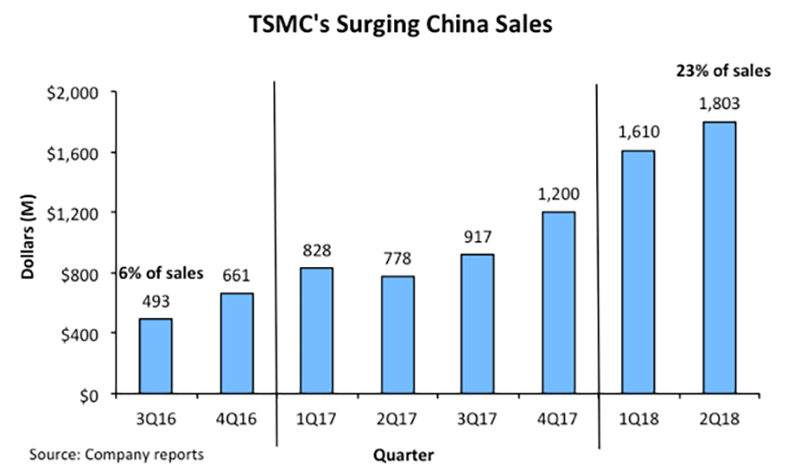 While TSMC has enjoyed a great ramp up in sales for its cryptocurrency business over the past year, the company has indicated that a slowdown is expected for this business in the second half of this year. It appears that the demand for cryptocurrency devices is highly dependent upon the price for the various cryptocurrencies (the most popular of which is Bitcoin). As a result, the recent plunge in the price for Bitcoins (going from over $15K per Bitcoin in January of this year to less than $7K in September), and other cryptocurrencies as well, is lowering the demand for these ICs.

Moreover, since TSMC realised from the beginning that the cryptocurrency market was going to be volatile, the company did not adjust its capacity plans based on the recent strong cryptocurrency demand and does not incorporate cryptocurrency business assumptions into its forecasts for future long-term growth.