Automotive and IoT will drive IC growth up until 2021

According to IC Insights’ new 2018 Integrated Circuit Market Drivers Report, integrated circuit sales for automotive systems and the IoT are forecast to grow 70% faster than total IC revenues between 2016 and 2021. ICs used in automobiles and other vehicles are forecast to generate worldwide sales of $42.9bn in 2021 compared to $22.9bn in 2016, while integrated circuit revenues for IoT functionality in a wide range of systems, sensors, and objects are expected to reach $34.2bn in four years compared to $18.4bn last year, says the new 358-page report.

Cellphone IC sales - the biggest end-use market application for integrated circuits, accounting for about 25% of the IC market’s total revenues - are expected to grow by a CAGR of 7.8% in the 2016-2021 period, reaching $105.6bn in the final year of the new report’s forecast. Meanwhile, weak and negative IC sales growth rates are expected to continue in video game consoles (a CAGR of -1.9% to $9.7bn in 2021) and tablet computers (a CAGR of -2.3% to $10.7bn), according to the 2018 IC Market Drivers report.

Sharply higher average selling prices (ASPs) for DRAMs and NAND flash are playing a significant role in driving up dollar-sales volumes for ICs in cellphones and PCs (both desktop and notebook computers) in 2017. Cellphone IC sales are on pace to surge 24% this year to an estimated $89.7bn, while PC integrated circuit dollar volume is expected to climb 17.6% to $69.0bn. 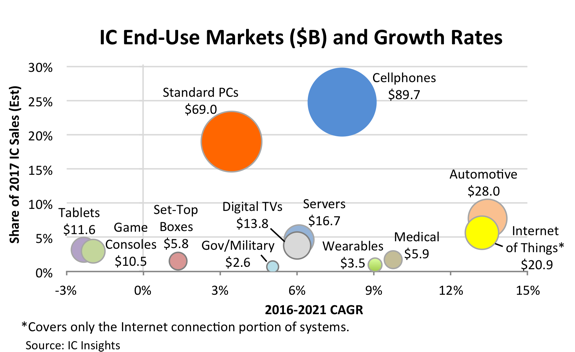 For both the cellphone and PC market segments, 2017 will be the strongest increase in IC sales since the 2010 recovery year from the 2009 downturn. The 2018 IC Market Drivers report’s forecast shows cellphone integrated circuit sales rising eight percent to $97.3bn next year and PC IC revenues growing five percent to $72.6bn in 2018.