The advancement of the IC industry hinges on the ability of IC manufacturers to continue offering more performance and functionality for the money. As mainstream CMOS processes reach their theoretical, practical, and economic limits, lowering the cost of ICs (on a per-function or per-performance basis) is more critical and challenging than ever.

The 500-page, 2019 edition of IC Insights’ ‘McClean Report—A Complete Analysis and Forecast of the Integrated Circuit Industry’ (released in January 2019) shows that there is more variety than ever among the logic-oriented process technologies that companies offer. The graph lists several of the leading advanced logic technologies that companies are presently using. Derivative versions of each process generation between major nodes have become regular occurrences. 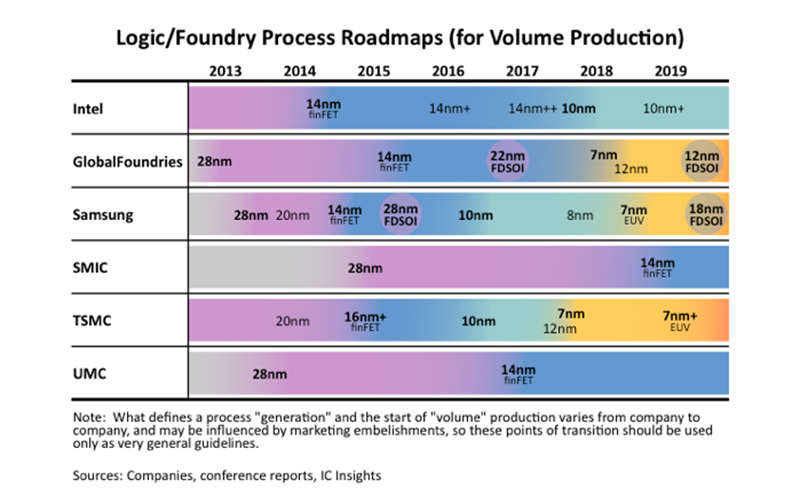 Mass production using its 10nm process will ramp in 2019 with the new “Sunny Cove” family of processors that it unveiled in December 2018. It appears that the Sunny Cove architecture has essentially taken the place of the 10nm Cannon Lake architecture that was supposed to be released in 2019. In 2020, a 10nm+ derivative process is expected to go into mass production.

TSMC
TSMC’s 10nm finFET process entered volume production in late 2016 but it has moved quickly from 10nm to 7nm. TSMC believes the 7nm generation will be a long-lived node like 28nm and 16nm.

TSMC’s 5nm process is under development and scheduled to enter risk production in the first half of 2019, with volume production coming in 2020. The process will use EUV, but it will not be the first of TSMC’s processes to take advantage of EUV technology. The first will be an improved version of the company’s 7nm technology. The N7+ process will employ EUV only on critical layers (four layers), while the N5 process will use EUV extensively (up to 14 layers). N7+ is scheduled to enter volume production in the second quarter of 2019.

Samsung’s 7nm technology went into risk production in October 2018. The company skipped offering a 7nm process with immersion lithography and decided instead to move directly to a EUV-based 7nm process. The company is using EUV for 8-10 layers at 7nm.

GlobalFoundries
GF views and markets its 22nm FD-SOI process as being complementary to its 14nm finFET technology. The company says the 22FDX platform delivers performance very close to that of finFET, but with manufacturing costs the same as 28nm technology.

In August 2018, GlobalFoundries made a major shift in strategy by announcing it would halt 7nm development because of the enormous expense in ramping production at that technology node and because there were too few foundry customers planning to use the next-generation process. As a result, the company shifted its R&D efforts to further enhance its 14 and 12nm finFET processes and its fully depleted SOI technologies.

For five decades, there have been amazing improvements in the productivity and performance of integrated circuit technology. While the industry has surmounted many obstacles put in front of it, it seems the barriers keep getting bigger. Despite this, IC designers and manufacturers are developing solutions that seem more revolutionary than evolutionary to increase chip functionality.