The average revenue generated from processed wafers among the four biggest pure-play foundries (TSMC, GlobalFoundries, UMC, and SMIC) is expected to be $1,138 in 2018, when expressed in 200mm-equivalent wafers, which is essentially flat from $1,136 in 2017, according to a new analysis by IC Insights.

The average revenue per wafer among the Big 4 foundries peaked in 2014 at $1,149 and then slowly declined through last year, based on IC Insights’ extensive part-two analysis of the integrated circuit foundry business in the September Update to The 2018 McClean Report.

Even when using revenue per square inch, the difference is dramatic ($7.41 for the 0.5µ technology versus $53.86 for the ≤20nm technology). Since TSMC gets such a large percentage of its sales from ≤45nm production, its revenue per wafer is expected to increase by a compound annual growth rate (CAGR) of two percent from 2013 through 2018 as compared to a -2% CAGR for the total revenue per wafer average of GlobalFoundries, UMC, and SMIC during this same timeperiod. 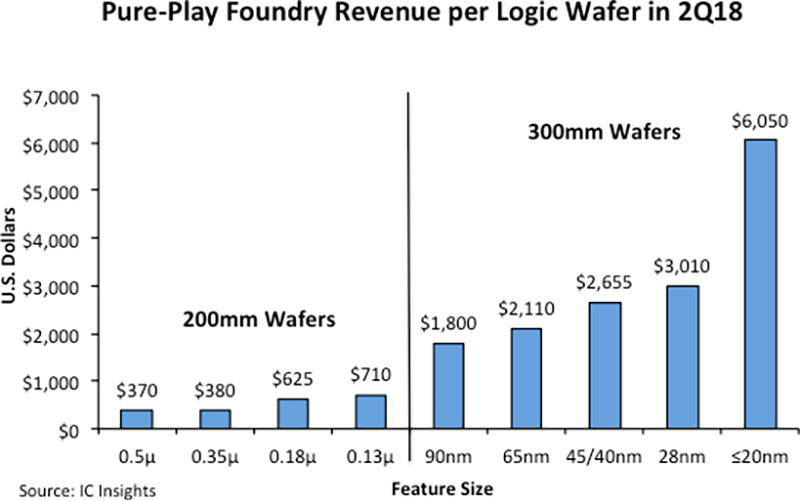 There will probably be only three foundries able to offer high-volume leading-edge production over the next five years (i.e., TSMC, Samsung, and Intel). IC Insights believes these companies are likely to be fierce competitors among themselves, especially TSMC and Samsung, and as a result, pricing will likely be under pressure through 2022.