Semiconductor merger and acquisition activity strengthened in 2019 after pulling back in the two previous years from historic high levels of M&A agreements in 2015 and 2016. More than 30 semiconductor acquisition agreements in 2019 had a combined value of $31.7bn, which was a 22% increase from $25.9bn in 2018, according to data compiled by IC Insights in its new 2020 edition of The McClean Report—A Complete Analysis and Forecast of the Integrated Circuit Industry.

The 2019 value of semiconductor acquisition agreements reached the third-highest annual total ever, but the year was still far behind 2015 and 2016 (Figure 1).

It appears the pace of semiconductor acquisitions has moved up to a ‘new normal’ level since 2015—perhaps in the $25-30bn range per year—as consolidation in the chip industry quickens and large suppliers strike deals to add new products and technologies for higher growth this decade, in such areas as machine-learning and artificial intelligence, autonomous vehicles, human recognition, computer vision, virtual/augmented reality, and high-speed wireless connections to the ever-expanding Internet of Things. 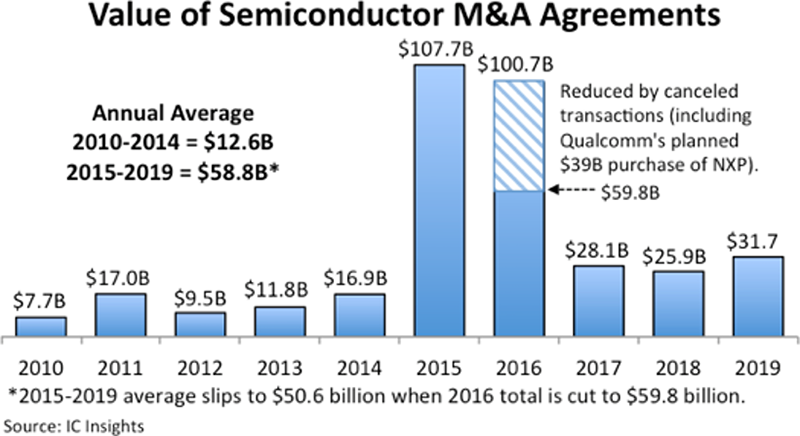 M&A announcements surged in 2015 with the total value of deals hitting a record-high $107.7bn, followed by $100.7bn in acquisition agreements in 2016 (just $59.8bn of those transactions were completed in the following years because several major ones were dropped after failing to win approval by government regulators).

Seven of the acquisition agreements in 2019 exceeded $1.0bn. Here is where those seven acquisitions rank among the 50 largest semiconductor M&A deals in history.