Two huge purchase agreements in July and September have guaranteed that 2020 will become at least the second-largest year in history for semiconductor merger and acquisition announcements, according to data released in the September Update to IC Insights’ 2020 McClean Report.

In the first nine months of 2020, the combined value of semiconductor M&A agreements climbed to $63.1bn, thanks to Nvidia’s $40bn deal in September to acquire processor-design technology supplier ARM in the UK from SoftBank and Analog Devices’ $21bn announcement in July to buy analogue/mixed-signal IC maker Maxim Integrated Products in Silicon Valley. These two mega-deals account for about 97% of the M&A dollar value in 2020.

Until the Nvidia-ARM and Analog Devices-Maxim purchase agreements were struck, semiconductor M&A activity nearly stalled in 2020 with $1.8bn in semiconductor acquisitions being announced in the first quarter and only $165m being reached in 2Q20 because the coronavirus pandemic accelerated worldwide, causing businesses and schools to close, people to be quarantined at home, and the global economy to crash. 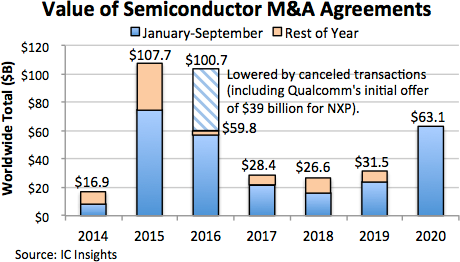 In addition, the US-China trade war and government agencies protecting domestic semiconductor industries have discouraged some companies from attempting to strike large acquisition agreements in the past couple years. If completed, US-based Nvidia’s $40bn purchase of ARM would be the largest semiconductor acquisition ever.

However, this deal is bound to face rigorous reviews in China, Europe, and other markets because ARM’s intellectual property (IP) dominates development of smartphone and other mobile processors worldwide (see September 16th, 2020, Research Bulletin).

As seen in the figure, the dollar value of semiconductor acquisition announcements through the first nine months of 2020 was more than any year since 2015, which remains the top year for industry M&A agreements. That year, more than 30 deals valued at $107.7bn were announced.

IC Insights lowered the M&A total for 2016 from $100.7bn to $59.8bn to account for about $41bn in canceled acquisition agreements, primarily because companies could not secure government approvals to complete those transactions. If Nvidia and Analog Devices are able to win clearance for their megadeals from government regulators worldwide, 2020 will easily surpass 2016 as the second-largest year for semiconductor M&A without any new agreements being struck in 4Q20.