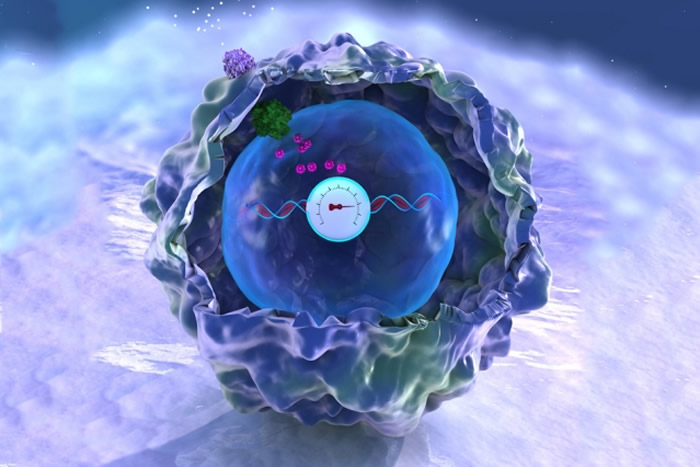 MIT biological engineers have devised a way to record complex histories in the DNA of human cells, allowing them to retrieve "memories” of past events, such as inflammation, by sequencing the DNA. This analogue memory storage system is the first that can record the duration and/or intensity of events in human cells.

This could also help scientists study how cells differentiate into various tissues during embryonic development, how cells experience environmental conditions, and how they undergo genetic changes that lead to disease.“To enable a deeper understanding of biology, we engineered human cells that are able to report on their own history based on genetically encoded recorders,” says Timothy Lu, an Associate Professor of electrical engineering and computer science, and of biological engineering. This technology should offer insights into how gene regulation and other events within cells contribute to disease and development, he adds.

Lu, who is head of the Synthetic Biology Group at MIT’s Research Laboratory of Electronics, is the Senior Author of the new study, which appears in the 18th August online edition of Science. The paper’s lead authors are Samuel Perli SM ’10, PhD ’15 and Graduate Student Cheryl Cui.

Analogue memory
Many scientists, including Lu, have devised ways to record digital information in living cells. Using enzymes called recombinases, they program cells to flip sections of their DNA when a particular event occurs, such as exposure to a particular chemical. However, that method reveals only whether the event occurred, not how much exposure there was or how long it lasted.

Lu and other researchers have previously devised ways to record that kind of analogue information in bacteria, but until now, no one has achieved it in human cells.

The new MIT approach is based on the genome-editing system known as CRISPR, which consists of a DNA-cutting enzyme called Cas9 and a short RNA strand that guides the enzyme to a specific area of the genome, directing Cas9 where to make its cut.

CRISPR is widely used for gene editing, but the MIT team decided to adapt it for memory storage. In bacteria, where CRISPR originally evolved, the system records past viral infections so that cells can recognise and fight off invading viruses.

“We wanted to adapt the CRISPR system to store information in the human genome,” Perli says.

When using CRISPR to edit genes, researchers create RNA guide strands that match a target sequence in the host organism’s genome. To encode memories, the MIT team took a different approach: They designed guide strands that recognise the DNA that encodes the very same guide strand, creating what they call “self-targeting guide RNA.”

For example, the researchers engineered a gene circuit that only expresses Cas9 in the presence of a target molecule, such as TNF-alpha, which is produced by immune cells during inflammation. Whenever TNF- alpha is present, Cas9 cuts the DNA encoding the guide sequence, generating mutations. The longer the exposure to TNF-alpha or the greater the TNF-alpha concentration, the more mutations accumulate in the DNA sequence.

By sequencing the DNA later on, researchers can determine how much exposure there was.

“This is the rich analogue behavior that we are looking for, where, as you increase the amount or duration of TNF-alpha, you get increases in the amount of mutations,” Perli says.

“Moreover, we wanted to test our system in living animals. Being able to record and extract information from live cells in mice can help answer meaningful biological questions,” Cui says. The researchers showed that the system is capable of recording inflammation in mice.

Most of the mutations result in deletion of part of the DNA sequence, so the researchers designed their RNA guide strands to be longer than the usual 20 nucleotides, so they won’t become too short to function. Sequences of 40 nucleotides are more than long enough to record for a month, and the researchers have also designed 70-nucleotide sequences that could be used to record biological signals for even longer.

Tracking development and disease
The researchers also showed that they could engineer cells to detect and record more than one input, by producing multiple self-targeting RNA guide strands in the same cell. Each RNA guide is linked to a specific input and is only produced when that input is present. In this study, the researchers showed that they could record the presence of both the antibiotic doxycycline and a molecule known as IPTG.

Currently this method is most likely to be used for studies of human cells, tissues, or engineered organs, the researchers say. By programming cells to record multiple events, scientists could use this system to monitor inflammation or infection, or to monitor cancer progression. It could also be useful for tracing how cells specialise into different tissues during development of animals from embryos to adults.

“With this technology you could have different memory registers that are recording exposures to different signals, and you could see that each of those signals was received by the cell for this duration of time or at that intensity,” Perli says. “That way you could get closer to understanding what’s happening in development.”