The path to high GNSS accuracy

Global Navigation Satellite System (GNSS) receivers are used in many applications and were first developed in the 20th century, mainly to help military personnel. Location awareness soon meant that many civilian applications started to use GNSS - from automobiles and heavy equipment, to cyclists and hikers. As Thomas Nigg, Head of Product Strategy Position, u-blox explains, we are on the brink of a new era of Global Navigation Satellite Systems (GNSS).

In the early beginnings in the first part of this century, Time To First Fix (TTFF) (the measure of performance of a GNSS receiver that accounts for the time elapsed from the GNSS receiver switch-on until the output of a navigation solution within a certain performance), was reduced from minutes to 26 seconds.

There was then advances in sensitivity, where we were able to move from -130dBm to -167dBm - a massive improvement. This focus on sensitivity lasted a few years until the improvements reached a plateau and the focus shifted to multi-GNSS.

“This was a time when not only the US GPS system became available but the Russian’s rebuilt the GLONASS GPS system,” said Nigg. “The rest of Europe then started to talk about Galileo which was eventually deployed, and then the Chinese started with their own system called BeiDou, so everyone added more and more satellites. That was the big topic in GNSS about two years ago.

“We are on the brink of a new era in GNSS and the focus of that will be around accuracy. We are approaching the limits of typical GNSS accuracy of several metres, and are moving towards decimetre or centimetre level.”

This was possible in the past. However, there were major cost barriers in previous years that prevented accuracy from becoming a major trend. Looking at the high precision GNSS market today, it is very niche with high price points - it is high cost, low volume and is dependent on expensive correction services.

However, in eight to ten years’ time Nigg claims that we will be looking at an entirely different world, where GNSS will go from being a very niche to a mass market where the technology will be accurate enough to be employed in applications such as lane navigation, augmented reality, UAV flights and landings, robotic lawnmowers and tractors and V2X.

Nigg added: “Engineers will actually invent many more applications with high precision GNSS. We are able to take the classical GNSS receiver from the nominal two metres to the centimetre level.”

How does u-blox do this?
First we have to take a look at the variety of errors that hinder a GNSS system from being more accurate. These include positioning errors, in metres, in satellite orbit position, and the atomic clock on board those satellites, plus ionospheric and tropospheric problems.

“These vary across the globe and the GNSS system will provide an indication of the distortion in the ionosphere and troposphere, but if ultra-precision is required then that is simply not good enough. What we need is something that takes all these errors out of the equation, and the answer is a correction service. If I have a reference receiver which can transmit an exact location, I can transmit a correction to a rover and the rover can correct its position accordingly. This can work very efficiently,” added Nigg.

Correction service terminology
There are two fundamentally different ways to remove the common errors associated with GNSS accuracy. One is a technique called OSR which is used in Real Time Kinematic (RTK) satellite navigation (a technique used to enhance the precision of position data derived from satellite-based positioning systems).

Observed errors are transmitted to the rover and the network tells the receiver the correction for its location. This can be very precise, however, the drawbacks are that you need two-way communication, which is a burden for many applications, and you need a dense network which is also a burden for investment as it is very expensive.

“Lately a different technique has been launched called SSR - State Space Representation. This basically means that you have a network in the background which breaks down the errors into components. That has a big advantage as it allows a one-way broadcast. This is the only feasible approach for an automotive application.” 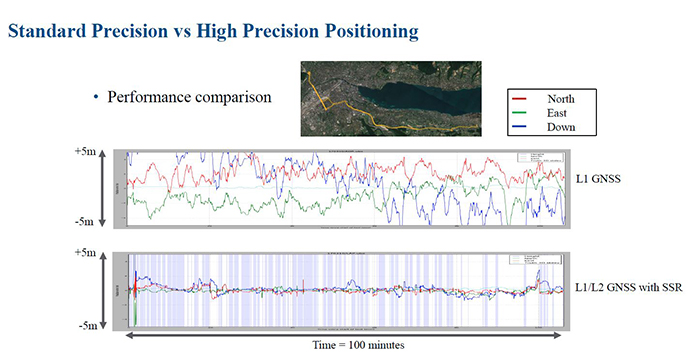 Above: Comparison of standard vs high precision GNSS in an automotive application

Set up as a joint venture between u-blox, Bosch, Geo++ and Mitsubishi Electric in August, Sapcorda Services, based in Berlin, will distribute GNSS positioning services for high precision GNSS applications, and will target the mass market areas of automotive, industrial and consumer.

The four parties recognised that existing solutions for GNSS positioning services do not meet the needs of emerging high precision GNSS mass markets. As a result, they decided to join forces to facilitate the establishment of a worldwide available and affordable solution for system integrators, OEMs and receiver manufacturers.

Sapcorda will offer globally available GNSS positioning services via internet and satellite broadcast and will target accurate GNSS positioning at centimetre level. The real time correction data service will be delivered in a public, open format and is not bound to receiver hardware or systems.

“The more autonomy you have the more you’ll have to verify position and the more backup systems you’ll have to have,” added Nigg. “Level 2, 3 and 4 autonomy are all special uses cases i.e. for use on the highway or for parking. So carmakers have to ensure that this system is only used as an autonomy feature in that particular use case. And this is where GNSS comes in.”

Above: The different levels of autonomous driving

There are a variety of technologies that are combining to meet safety goals in the automotive sector, and many of the safety critical problems that occur require GNSS. When it comes to autonomous driving, GNSS can calculate the exact starting point of a journey, identify correct segments in a HD map, geo-fence critical areas to reduce speed and calibrate the vehicles sensors.

“If you look at level 4 autonomy, there are even more special use cases. Poor weather conditions for example - snow, rain, fog, storms. Optical automotive systems can struggle in these scenarios. Lane markings and landmarks can be invisible, and lighting conditions can be poor. So there are limits to what one system can do, so you they need to be complimented. And in these cases GNSS would not have a problem.”