Like any emerging technology, the myths around UWB hit the headlines almost as fast as the facts, and sometimes linger on in our memories. We asked several UWB ecosystem players to weigh in on the misconceptions they see attending UWB now and in the future as the technology becomes more accessible. Let’s demystify four misunderstandings about UWB.

Myth One: UWB only operates at short distances

This misperception is both understandable and incorrect. Although UWB is technically a short-range wireless technology (like Bluetooth, WiFi and NFC), that’s really more of a category listing. UWB can operate at frequencies between 6.5GHz and 10GHz compared with Bluetooth’s fixed 2.4 GHz. The general rule is indeed that the higher the frequency, the shorter the range.

However under Line-of-Sight conditions, UWB’s operating range can stretch to 100 metres - the length of an international soccer pitch. Of course, the real world range depends on many variables in the end-product design and the environment it’s planned for. Antenna design, for instance, power levels, channel frequency, complexity of the propagation environment, and the kinds of materials that the signal may have to pass through, these all have an influence.

UWB will not perform well in metal environments, but does pass through other materials such as wood, plaster, and even brick - while density of the material impacts the range. So, although many current applications are using UWB for its short-range benefits, it can stretch a lot further.

Sure, it started life as a means of high-rate data communication, and it was up against WiFi, but that was then. UWB has undergone several transformations: It has evolved from an OFDM-based data communication to an impulse radio technology specified in IEEE 802.15.4a and the security extension being specified in IEEE 802.15.4z (at the PHY/MAC level) today make it a unique secure fine ranging technology.

Having undergone that transformation, today’s UWB has evolved from data communication into something unique: a secure fine-ranging impulse radio technology. As such it fits better into the category of sensing technologies that can pinpoint objects more accurately than any other, down to +/- 10cm, bringing a new dimension of spatial and contextual awareness to product technology.

Myth Three: UWB’s ‘precision’ benefits can be matched by Bluetooth 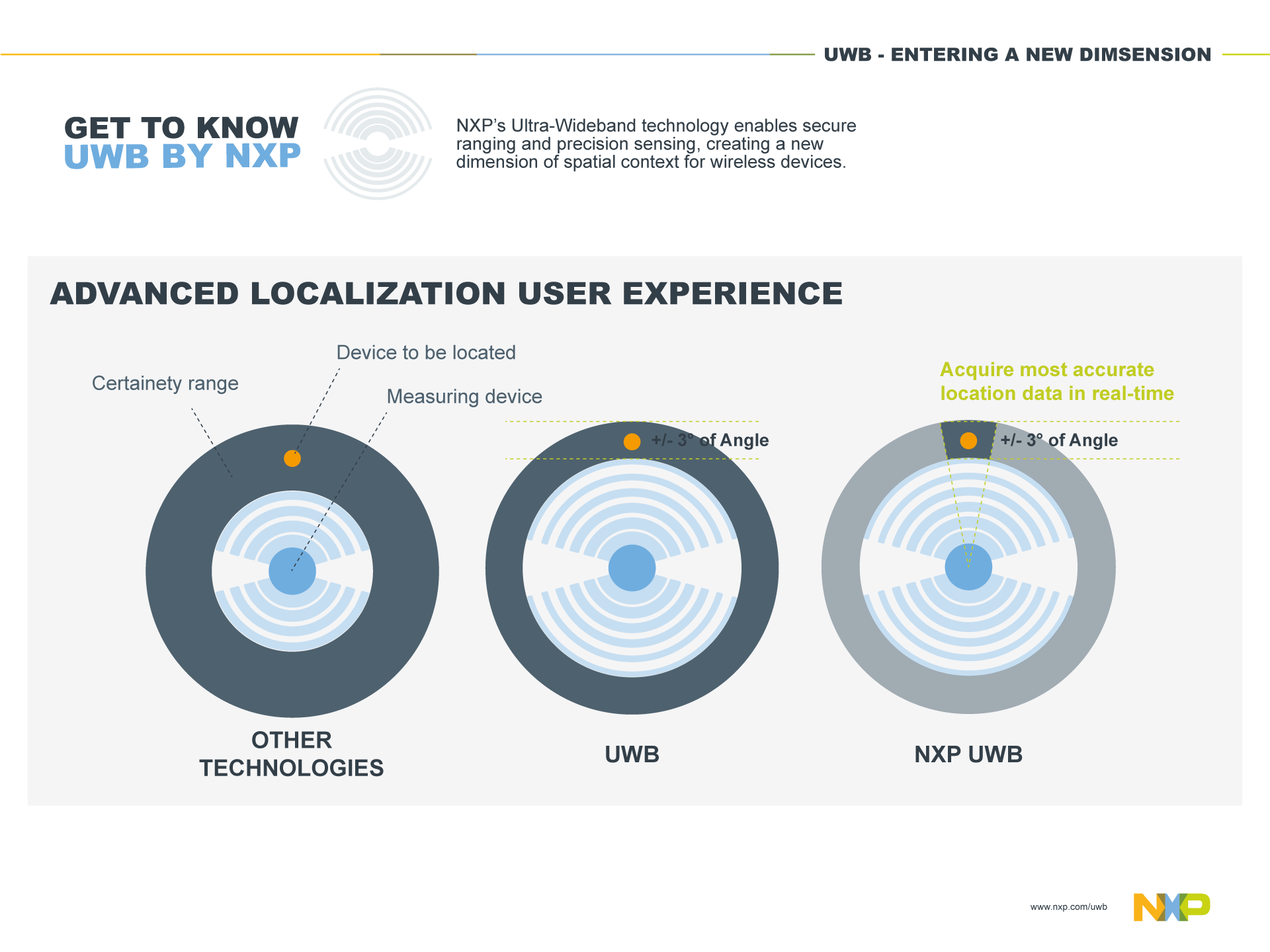 Since UWB broke cover and showed its incredibly accurate location sensing capabilities, Bluetooth LE and WiFi’s positioning capabilities and accuracy have been promoted and improved. Experiments under lab conditions including a very high infrastructure density and clear line of sight have shown improvements in the new Bluetooth 5.1 release and the WiFi Alliance has announced updates on their localisation capabilities for the coming release, too. But the physics just doesn’t compare. They still rely on a modulated sine wave carried over a narrow frequency, whereas UWB has a unique pulse signal (2ns) operating over 500MHz of frequency.

Bluetooth LE, and WiFi use the Receiver Signal Strength Indication (RSSI) technique which are known to be more susceptible to environmental factors, including obstructions and interference from other radios, resulting in reduced accuracy. An obstruction can result in severe attenuation of signal power, leading to errors that can be off by multiple meters.

UWB in turn is based on Time-of-Flight measurements. Distance is determined by the travel time of a pulse packet and multiplied by the speed of light. According to the FiRa Consortium “UWB’s very fast transmission of steep and narrow pulses makes it possible to mark signal timing with a higher degree of certainty. The UWB pulse signal maintains its accuracy even as the distance between the devices increases, and displays excellent resilience in non-Line of Sight (non-LoS) scenarios.”

Yes, it’s mainly three big companies - namely Apple, Samsung and BMW - that have been making news about UWB’s powerful capabilities for mobile access and file sharing. But the impact of their integration effort to the broader ecosystem development can’t be underestimated.

When the automotive industry adopts a new technology it’s well embedded since decisions in automotive will be generational. The same is true for Mobile. To make the decision to add another RF or antenna to the platform is a big deal and will not happen unless it’s adding big value for consumers. And ones a new technology makes it to the phone, it becomes a free resource and triggers adoption to new use cases start are just now starting to reveal itself.

In fact, the FiRa Consortium has already listed more than 35 use cases, and there will be more. Indoor GPS, credentials sharing, access control, gesture-based control and VR gaming, presence-based device activation… these are just the beginning. UWB can be stretched from phone to car to IoT sensors, devices and objects of all form factors with mobile likely to be the seeding platform for the broad adoption of UWB.

Read more
Wireless
Making school safety a priority with smart technology
Wireless
LTE/GPS external antennas integrated into one housing
Wireless
How wearables are being used to keep workplaces open
Wireless
5G is transforming FWA performance
Wireless
The role of IoT and data in keeping us safe and boosting the economy
Wireless
Smart buildings: shaping how we live and work in 2021
Wireless
The growth of LoRa and the LoRaWAN open protocol
Wireless
RISE-6G: dynamically programmable wireless environments
Wireless
The era of the ‘Internet of Boxes’
Wireless
How is IoT saving the social housing sector?
Wireless
COVID-19 sparks a rise in biometric contactless payment
Wireless
Full suite of UK, EU and US wireless certification