Our website is made possible by displaying online advertisements to our visitors. Please consider supporting us by disabling your ad blocker.
Home > Industries > Who run the world? Robots!
Robotics

Who run the world? Robots!

They have appeared in several horror films, and one day will probably take over the world, but for now robots are landing in London for most of 2017. The Science Museum in London is hosting a major exhibition, and has extracted some of the most complex and bizarre robots ever created.

Running from 8th February all the way through to 3rd September, the Robots Exhibition explores over 500 years of robots.

Robots and robotics have been such a big part in recent technology, but the original concept of a robot, has been around for centuries and produced so many weird and wonderful interpretations thoughout the world.

However, now, chances are if you are met by a robot it will have huge inviting eyes, perform a dance for you and be made of plastic. As service robots, which are designed to help humans with everyday tasks, slowly make their way into our homes, there is a distinctive familiarity in them.

Ian Blatchford, Science Museum Director said: “At the exhibition’s opening the collection was designed to show the ‘unsettling truths’ about humanity and how we view ourselves, and I believe it to be the most intelligent global and complete collection of robots in the world.”

Just walking around the first floor exhibition space at the London museum you can see the thought and effort that has been put into this collection. It begins straight away with a wall full of creepy robotic eyes that are attached to skulls and of course follow you around as you move.

This is followed by an even creepier animatronic baby, attached to a wall and surrounded by a glowing halo of light. Robotics like this baby have been used in films and are said to sometimes provoke parental emotions or contrastingly, be repelled by it.

The evolution in robotics can be seen through the journey of the exhibition, with early items including automated Victorian cups used during drinking games, and steel arms. 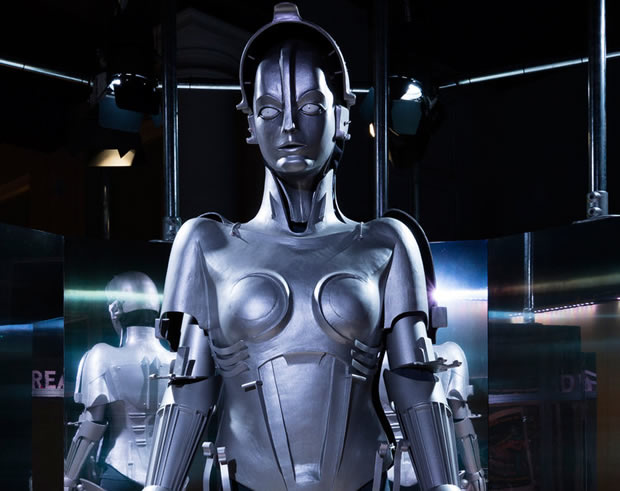 Cyril Jourdan from The Robot Studio shared: “It’s quite impressive to see the evolution of humanoid robots. The major change is obviously electronics and the computing side but mechanically we find some similarities and nice evolution in materials, such as 3D printing and new plastic, which they didn’t have.”

As you move through the exhibition the improvements in technology is clear, as towards the end robots such as Baxter and Pepper can be interacted with. There are 16 different bots throughout the exhibition which are able to move and interact.

The Bowes Museum in County Durham has lent the Silver Swan, created in 1773, which is controlled by three clockwork mechanisms allowing it to swim, move and preen as if it was catching fish.

The collection of robots will be making a tour around the country, appearing in Manchester in 2017, Newcastle in 2018, Edinburgh in 2019 and internationally in 2021.

Tickets are available online, and cost £15 for adults, £13 for concessions, and are free for under 7s.