Home > Industries > The key to manufacturing during COVID-19
Robotics

The key to manufacturing during COVID-19

COVID-19 has had a huge impact on the world, causing unprecedented disruption to economies and healthcare all around the globe. Many businesses have been impacted, some terminally, and the manufacturing sector is no exception, experiencing challenges to supply chains and employee availability. Ali Husain, Sr. Manager, Corporate Strategy & Marketing, ON Semiconductor, explains.

COVID-19 is just one more factor challenging manufacturing operations, albeit a significant one. In recent years, there has been a greater trend towards ‘re-shoring’ manufacturing activities, accelerated in part due to increased trade conflicts among the world’s trading partners, increased extreme weather events heightening an appreciation for supply chain resiliency, and greater tracking of intercontinental freight’s carbon footprint.

COVID-19 has exacerbated the problem significantly. The need for social distancing has meant that factory layouts and processes have had to change which, in some cases, have reduced capacity and/or increased costs. COVID-19 mitigation measures including mass lockdowns and a legal requirement for certain individuals to self-isolate mean that it is increasingly difficult for employers to forecast the availability of their workforce from one day to the next.

The issue is very real – a survey by the National Association of Manufacturers in the early stages of the COVID-19 pandemic showed that a third of manufacturers faced supply chain disruption while over half anticipated a change in their operations. Over three-quarters anticipated some form of financial impact.

While robots have been seen by some as a threat to jobs, opinions are now shifting and they are being seen as an enabler – a way to be able to manufacture (or perform other key supply chain tasks such as warehousing) with a substantially level cost base anywhere on the planet, keeping factories open in a world where that is becoming increasingly difficult.

In general, manufacturing processes have been either fully manual, or fully automated. Where there has been mixing it has tended to be that steps that were difficult to automate remained manual, while other steps were fully automated. There has been relatively little interaction between humans and their robotic co-workers, as being in close proximity to robots that move workpieces at high speed is a significant health and safety issue.

Automation can be expensive and time consuming to design and implement as it requires specific tooling and software coding for each step in the manufacturing process. The need for flexible manufacturing has often precluded any significant move to automation.

Human labour is inherently flexible, yet the need to constantly perform repetitive operations is boring, leading to possible loss of concentration – and there is always a possibility of repetitive stress injuries. Humans can become tired and make mistakes, while robots cannot.

In the early days of robotics, it was assumed that eventually factories would become entirely robotic with just a few humans for monitoring and to deal with any issues. Factory owners saw a future with increased capacity and round-the-clock light-out operation with few variable costs while workers and unions saw jobs disappearing – and were naturally resistant.

However, due to the need for flexibility and ingenuity, current thinking is moving in the direction of having human workers and robots co-operating, with each playing to their strengths. In this approach, robots would be used for tasks that require strength, precision and speed while humans would be assigned tasks that needed ingenuity, judgment and dexterity. So, while robots have long been thought of as replacements for human workers, current thinking depicts them more as tools for use by humans. In the past, people would have used a basic screwdriver or wrench while these days they use power tools – the future of robotics is very analogous to this.

Supporting this approach, a study (Knight, 2013) by the Massachusetts Institute of Technology (MIT) found that manufacturing processes are faster, more efficient and more cost-effective when there is co-operation between humans and robots.

Applications throughout the factory environment

Within a factory there are typically three primary activities; logistics, production and quality. While robots are often thought as being confined to assembly/production tasks, they do have a role to play in all three areas. Based upon a defined bill-of-materials (BoM), robots can kit production jobs ready to be introduced to the production process. Automatic guided vehicles (AGV) can be used to ferry material kits and/or sub-assemblies around the factory, thereby keeping the manufacturing process moving.

Robots are also able to process machining and/or assembly tasks themselves as well as being able to collaborate with human workers to support manual tasks where necessary. 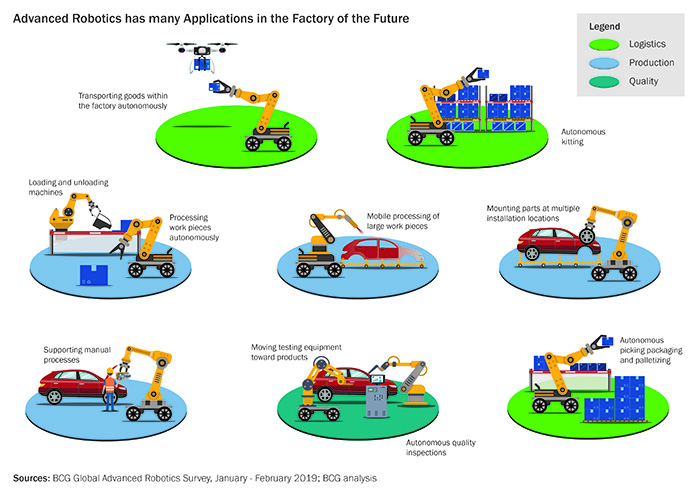 In the final stages (inspection and test), robots can be used to move the product to the testing station or vice-versa. Using technology including advanced image sensors, they are also able to facilitate the testing if necessary.

While it is acknowledged that the initial investment for installing robotics can be significant, a study (Küpper, Lorenz, Knizek, Kuhlmann, Maue, Lässig & Buchner, 2021) by Boston Consulting Group on advanced robotics indicated that among large companies (those with revenues exceeding $1bn), 90% have already implemented some form of advanced robotics. While this seems to put smaller companies at a competitive disadvantage, approaches such as robotics-as-a-service are helping to level the playing field.

Smaller companies are now able to avoid the significant capital outlay by leasing robot solutions. This brings further advantages including being able to rapidly scale the robotic installation in line with the business need and the ability to deploy the solution more rapidly.

While many of the topics surrounding the use of robots in industry, and in particular in factories, have been around for some time, COVID-19 is bringing a new urgency and focus to the discussion. As the core discussion moves away from human worker replacement and towards human worker co-operation, concerns from workers and unions are diminishing.

In the COVID-19 world, human workers have to social distance and there is always the risk that an outbreak will lead to a lockdown that will prevent the workforce leaving home. Absenteeism is a greater problem these days with some perfectly healthy people being bound by law to quarantine due to a chance contact and this, along with erratic supply chains, is making factory management an even more challenging task.

Robots go a long way to levelling labour costs globally, allowing companies to ‘re-shore’ their operations into jurisdictions that may be more stable. When paired with a human worker as a tool and not as a replacement/threat, they allow social distancing to be achieved while the human/robot team delivers the flexibility, ingenuity, strength, precision and speed that world-class manufacturing operations require. Surprisingly, the COVID-19 pandemic may be the best thing to happen for robotics – ever.