Many analysts agree - the next industrial revolution is already upon us, driven by growth in autonomous systems. The push to more efficient use of materials and labour in this next age of industrial discovery requires that the underlying technology continue to evolve at a rapid pace.

Automated and autonomously acting robots, vehicles, and drones, which are tightly integrated into manufacturing, mining, farming, and logistics processes, are critical pillars of the ongoing industrial revolution.

To achieve the required levels of system performance expected from autonomous applications, equipment needs to both perceive and navigate its environment. It can accomplish these goals with the help of sensing modalities whose outputs are fused and interpreted by traditional AI or machine learning-based algorithms. Reliability and availability are the biggest associated challenges requiring the implementation of multiple sensor technologies in parallel, with the end goal of improving safety, efficiency, cost, and flexibility.

Autonomous systems rely heavily on high fidelity data collected by fused sensing modalities to inform AI and algorithms. Among the most commonly accepted sensors in the industry are radar, LIDAR, vision, ultrasound, and inertial sensors. The table here highlights the benefits and limitations to each perception sensing modality and the need for multiple sensors in a system.

The mission of an autonomous system in an industrial setting is often to locate and pick up an object rather than safely avoiding it. LIDAR’s strong object detection and classification accuracy provides the precision necessary to complete these common tasks. 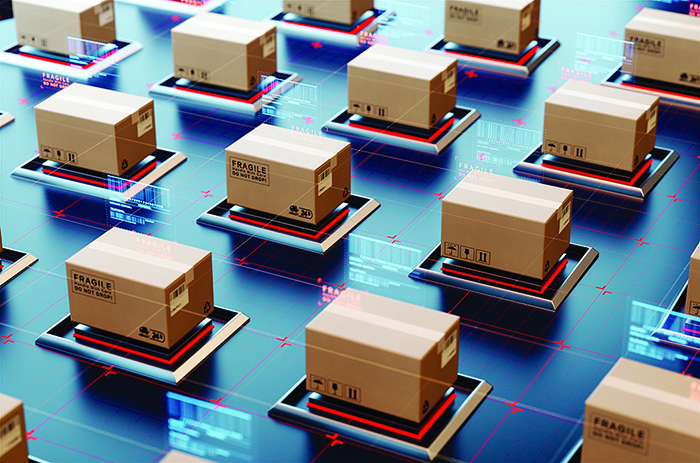 Above: the next industrial revolution is already upon us, driven by growth in autonomous systems

Operating in the terahertz frequency range, LIDAR systems achieve fine angular resolution that translates into high resolution depth maps. With these a LIDAR system can classify objects to fuse with vision, IMU, and radar information to make reliable, mission critical decisions. LIDAR systems are designed to work in dynamic environments, such as outdoors in bright sunlight. By using narrow pulses of 9xxnm and 15xxnm wavelengths, and driving them with high power, LIDAR is able to see farther in these challenging conditions. In addition, the narrow pulses allow for finer depth resolution to detect multiple targets within a pixel, while the infrared light at 9xx and 15xx has less solar radiation.

Numerous challenges must be overcome to encourage the mass adoption of LIDAR systems. These include complex and costly signal chains, optical design issues, and system test and calibration.

Developments are currently underway to integrate these signal chains and reduce their complexity, size, power requirements, and overall cost of ownership.

As sensors proliferate on industrial machines, and the data available from them becomes richer, the significance of their location and relative motion increases as well. Autonomy often relates to mobility, and thus pinpointing a vehicle’s position, guiding a machine’s movement, and precisely steering their instruments are key enablers. Detecting such motion with precision allows more difficult and valuable application usage, where safety and reliability are demanded as well. The smart farm, for instance, is challenged to continually increase efficiencies in crop management, and locating instruments to within centimetres is the primary driver in conserving inputs and maximising outputs.

One approach to autonomous navigation is to leverage GNSS location services which, while being ubiquitous, are also vulnerable to signal disruption. Full autonomy requires unrestricted operation, with no threat of blockage or temporary disruption. Inertial sensors offer a complementary motion measurement, free from disruption and the need for external infrastructure. A combination of linear and rotational sensors, on all three axes, is typically combined into a six degrees of freedom inertial measurement unit (IMU). The IMU’s outputs can be resolved with additional processing to provide relative attitude, heading, and velocity. This ultimately provides what is known as dead reckoning guidance.

A special class of inertial sensors are necessary to resolve the accuracy of centimetre level positioning, or one-tenth of a degree of pointing angles. The output of consumer-level IMUs drift very quickly even in benign environments. They are not able to distinguish wanted motion from other error sources, including vibration and cross-axis disturbances. High performance inertial sensors have high stability in the range of 1°/hour, employ special sensor architectures to reject linear-g errors, and have been calibrated to compensate for temperature and alignment disturbances. This precision motion capture is done at 10× to 100× higher rates, compared to GPS and perception sensors, and thus is best able to replace the human instinctive motion sensing relied on in non-autonomous machines.

The growth of this industrial revolution is dependent on the evolution of the underlying sensing technology supporting autonomy. The capability that radar, LIDAR, and cameras possess to precisely detect and classify objects at both short and long range will enable autonomous industrial vehicles to effectively see much like a human operator. In addition, inertial technology will be critical in providing gut feel or dead reckoning navigation to autonomous applications. The more precise the sensors are, the higher quality the data that is being fed into artificial intelligence is, and this ultimately leads to a safer and more efficient application.