Now that’s what I call robotics

We’ve seen robots pick fruit, walk your dog and even protect you from the rain, but now they’re really taking centre stage. YuMi, ABB’s collaborative dual-arm robot, made its conducting debut in Italy on 12th September. Not one to shy away from the spotlight, YuMi directed none other than world famous tenor, Andrea Bocelli (pictured left). At a charity concert for the gala of the First International Festival of Robotics, YuMi entertained over 800 guests from around the world.

The robot’s flexible arm lets it conduct the orchestra accurately. While it may take 17 hours to teach YuMi a six minute performance, the event showed that collaboration between humans and robots can work well.

Maestro Bocelli was impressed by the performance, commenting: “It was so much fun to perform with YuMi, ABB's collaborative robot. It showed that a robot could really conduct an orchestra, but only with the excellent work of very talented engineers and a real maestro. Congratulations to the team that pulled this off.”

YuMi achieved a high level of fluidity of gesture, with softness of touch and expressive nuancing. Given the rigidity of gestures by previous robots, this represents an impressive step forward in the robot world. ABB believes YuMi’s successful orchestral debut means it can now be programmed to do the most delicate jobs in electromechanical assembly. 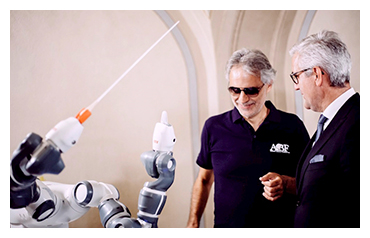 After the performance, Ulrich Spiesshofer (pictured right), CEO, ABB, said: "I think tonight we’re truly making history and writing the future of robotics applications. YuMi demonstrated how intuitive, how self-learning this machine is – how wonderful our software really is in learning the movement of a conductor, sensing the music, and really conducting an entire team.”

YuMi’s performance was developed in two steps. In rehearsals, Colombini’s movement were captured with a process called “lead-through programming,” where the robot’s two arms are guided to follow the motions with great attention to detail; these movements were then recorded. The second step involved fine-tuning the movements in ABB’s RobotStudio software, where the motions were synchronised to the music. With ABB’s technical expertise, the lead-through programming let Colombini focus on doing what he does best, bringing the music to life.

While YuMi’s performance was certainly impressive, observers said it lacked the full-bodied enthusiasm of a human conductor. Speaking to the BBC, Violinist Brad Repp said: “There’s not much room unfortunately for improvisation, so you basically have to go with the robot. […], there’s no way it could be the future, but it’s interesting, it’s nice to see.”

Just as YuMi delighted Bocelli, robots bring unique experiences and excitement to their worlds. Let’s just hope that fame doesn’t get too much for it, we wouldn’t like to see it commit suicide…