Home > Industries > Let's get ready to rumble: it's drones versus lightning
Robotics

Let's get ready to rumble: it's drones versus lightning

Natural selection exists so that when mother nature pits crocodiles against wildebeest and lions against antelopes, the survival of the fittest ensures that the circle of life is maintained. Nature and the animal kingdom is full of fights and battles, however, it turns out so is humanity. Entering the ring are several metallic and plastic drones going head-to-head with the terrifying forces of lightning, its man vs. nature in this one. Everyone place your bets – my money’s on the drones.

In the red corner, we have YouTuber Tom Scott and his two DJI Phantom 3 drones. Now for a bit of background; surviving plenty of extremely hostile environments before, these little versatile levitators have faced active volcanoes – but this time, they may have finally met their match.

And in the blue corner, we have the University of Manchester’s High Voltage Laboratory (HVL), with the supervillain-like impulse generator. Now, don’t let this accurately described, magical device fool you. It is capable of generating up to two million volts of electricity at the drop of a hat. However, to remain a fair and clean fight, they have kindly switched it down to just one million volts, no biggie.

In the first round, our trusted drone was tethered in place to ensure it couldn’t sneak out of the way of the lightning strikes. Working up a sweat, and charging up their impulse generator, there was certainly a nervous wait for the university's lab team, before the bolt made the first strike to the drone.

As you can imagine, it literally fell out of the sky. However, it was not quite the picture some of your vivid imaginations will have created.

Still in one piece, there weren’t parts scattered everywhere, and nothing was on fire, but the fried circuits could be smelt a mile off, as defeated Scott went over to retrieve the fallen tribute.

Although, the battery when removed, appeared to be perfectly intact, protected from the metal box encasing it which made a type of Faraday cage, it was the motors letting team humans down, as there were totally fried. 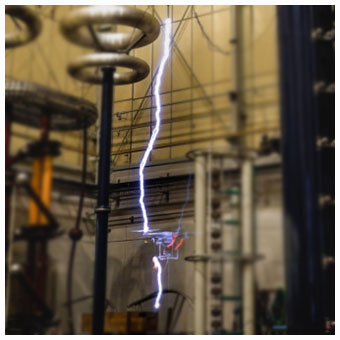 However, humanity wasn’t finished yet. Scott decided to go against the odds and send in his back-up drone. This time he gave his drone a make-shift lightning rod, which he hoped would send the bolt of doom screeching around the drone and not through it.

The power of nature was too much again though, as although the lightning did not appear to go for the decoy, during the second round it exploded through one of the propellers, sending it flying through the air. Looks like my money was misplaced.

Apart from being an entertaining watch, this experiment did have an actual purpose.

“One of the most pertinent questions we have had to answer in recent years is what happens to aeroplanes if they’re struck by lightning,” Enna Bartlett, a Digital Coordinator for the University of Manchester, noted in an accompanying blog.

“With our understanding of how aeroplanes behave in thunderstorms and how to provide protection for them, this knowledge could be applied to drone technology to ensure the drone and its pilot stays safe should they fly in adverse weather conditions.”