Home > Industries > Is it a bird? Is it a plane? No, it’s my wife’s birthday present!
Robotics

Is it a bird? Is it a plane? No, it’s my wife’s birthday present!

As the variety of applications suited to UAVs and drones has increased in recent years, so has discussion over their use as 21st century postman that are capable of making rapid deliveries to our front doors. However, tight regulations, high profile collisions and some unscrupulous drone users have proved a restrictive barrier to making delivery drones a reality and have made some of the general public very wary of them.

That may be about to change as Amazon, in partnership with the UK Government, has announced that it will be trialling drones that can deliver parcels within 30 minutes of them being ordered. Amazon is working with the Government in the UK and the UK Civil Aviation Authority (CAA), as the US Federal Aviation Authority has been slow to firm up regulations concerning the use of drones.

The Government claim that the trials will help to solve the three major challenges associated with delivery drones – that of safety, collision avoidance and the responsibility the pilot has for multiple UAVs operating beyond line of sight – and lay down new rules and regulations and lift restrictions for delivery drones of the future.

Of the variety of systems that have been tried at a research and development location in Cambridge, the favourite is a vehicle that incorporates aerodynamics of both an aeroplane and a helicopter which can land vertically on a mat which the buyer can place anywhere on their property. Obviously if a parcel is delivered to the front door when the buyer is not home then there is a risk of theft. However, with this delivery mat, the buyer can ensure the drone will land and deliver its package to a secure location – a back yard for example. Also being tested is a ‘sense and avoid’ technology which helps the drones avoid obstacles plus a system that will allow a single pilot to control multiple drones.

Another potential issue that needs to be ironed out is that of noise. While an individual drone may not be that noisy, if our skies are to be filled with dozens, if not hundreds, of aircraft, buzzing around making deliveries, then there could potentially be an issue. However, Amazon has also said it is currently working on ways to make the machines quieter.

Privacy and security are also problems that have got people questioning the use of delivery drones. Amazon has stated that its drones will only include sensors, and not cameras. However, military drones have been victims of hacking, so there is an argument to say that a commercial UAV will be even more vulnerable to theft for more sinister operations such as delivering drugs or explosives.

Special testing scenarios have been granted to Amazon for the purpose of the trials as current legislation has hampered the possibilities of delivery drones in the past, for example, current laws state that drones must remain in line of sight and within 500 metres of the pilot, and not within 150 metres of a built-up area.

Amazon has not stated how many deliveries will be involved however, its deliveries would apply to anything weighing less that 2.2kg – which is approximately 80-90% of the items it sells. Experts have sounded a note of caution that this announcement will open up delivery drones beyond just Amazon – with all the issues and problems that could bring – and that greater consultation and a broader discussion needs to take place before we can start thinking about rolling-out delivery drones into UK airspace. 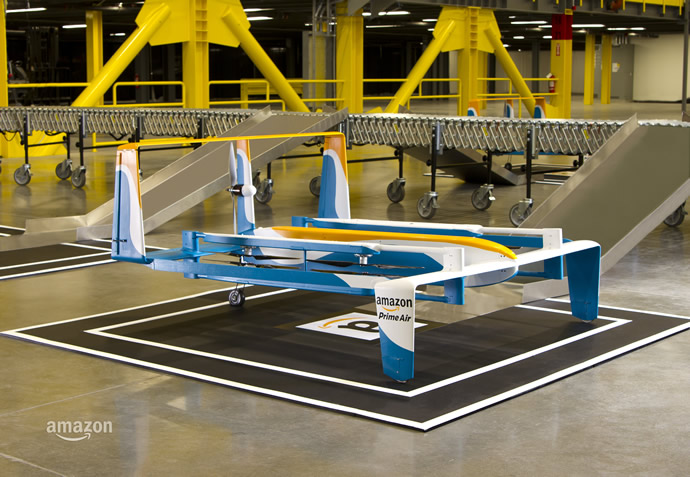 Despite the issues and concerns of some experts, Paul Misener, Amazon’s Vice President of Global Innovation Policy and Communications, was excited by the announcement. Speaking on the company’s website he said: “The UK is a leader in enabling drone innovation – we’ve been investing in Prime Air research and development here for quite some time. This announcement strengthens our partnership with the UK and brings Amazon closer to our goal of using drones to safely deliver parcels in 30 minutes to customers in the UK and elsewhere around the world.

“Using small drones for the delivery of parcels will improve customer experience, create new jobs in a rapidly growing industry, and pioneer new sustainable delivery methods to meet future demand. The UK is charting a path forward for drone technology that will benefit consumers, industry and society.”

Following the announcement that the CAA has relaxed several of the current safety regulations surrounding UK drone usage for commercial trials, Tim Morley, Category Manager at DronesDirect.co.uk said: “It’s great that the CAA are open to working with business and are encouraging drone usage within a commercial environment. This is a significant step towards safely helping to incorporate new drone technologies into everyday scenarios, something which will bring an array of new benefits to consumers.

“Recent research published in the Drones Usage Report 2016 reveals that more than half a million people in the UK have used drones for work purposes, with the creative and photographic industries leading uptake of usage, highlighting how many companies are now using and buying in drones for professional use.

“Drones are already being used for deliveries of consumer products, providing humanitarian aid, and security, worldwide, and with support from the CAA, Britain will continue to be at the forefront of continued aerial technology development. We anticipate even more businesses using drones for commercial purposes following the recent change in rules from the CAA.”

Whatever your view, this could be the watershed moment in the development of delivery drones, opening them up to a whole host of additional applications? It’s clear that much work still needs to be done to address issues around safety, security, privacy and reliability but this announcement could well open the door to other players in the industry - drone pizza delivery, a drone milkman or maybe even a UAVon lady?