Home > Industries > Eye'll be back ;)
Robotics

A partnership between the Polytechnic School and the Faculty of Dentistry at the University of São Paulo (USP) achieved a new patent. Researchers developed a prototype of a type of eye prosthesis with eyelids that blink in sync with the healthy eye. The project had two FD professors, Neide Coto and Reinaldo Dias, and a student of engineering at the Polytechnic, Paulo Oguro. The system was patented by the USP Innovation Agency in 2015.

FD professors and students meet people from all over the country who come to the USP in search of a bucomaxillofacial prosthesis, a specialty from the Dentistry faculty that aims at the rehabilitation of patients with some kind of face deformity.

“When, besides the loss of the eye, there is the loss of attachments such as eyelids and eyebrow, we should make the eye-palpebral prosthesis", explains Professor Neide Coto," but it is static. Therefore, in order to minimise the impact on the patient's family, we can make prosthesis with the eyes opened and another one with the eyes closed for night use ". 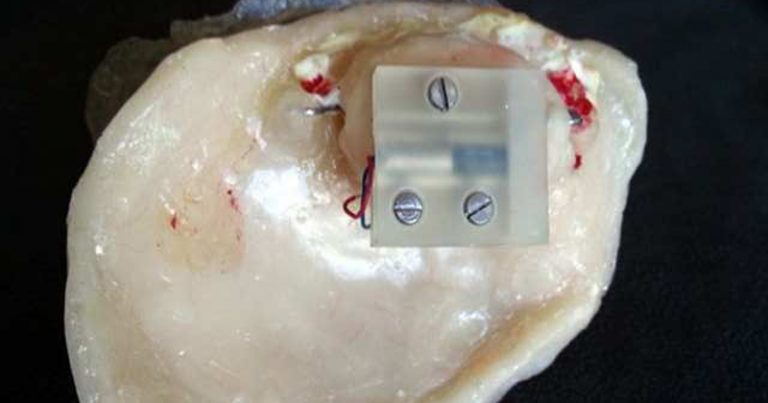 The main challenge was to develop a system which could fit in the eye socket and with a batery which could last at least one day. The photo shows the representation of the mechanical system involved in the movement of the eyelid

Coto explains that the first phase of the prosthesis preparation is the creation of a plaster model of the affected region, "working with the modeling of the compromised side based on the healthy side and, then, obtaining measurements and carrying out a whole study on the cartography of the face".

The prosthesis produced from the model can be made of acrylic resin or silicone, "depending on the case, whether the patient can easily come back to redo it, where he comes from, how his life is, etc, so we can extend the lifespan of this prosthesis".

Both Neide Coto and Dias remind that no prosthesis is lifelong, and that the need to redo it is important, even as a way to encourage medical follow-up, since many patients have the deformity due to cancer, or because the healthy eye needs to be followed-up by an ophthalmologist.

Coto also explains that in most cases, a pair of glasses is prescribed by the ophthalmologist to the patient, since the healthy eye can end up being overloaded. Thus, it is normal for the prosthesis to be attached to, or supported by, the glasses frame.

Paulo Oguro worked on the research for the conclusion of his dissertation at the Polytechnic, alongside with his supervisor, Professor Marcos Barretto. Coto tells that Barretto, a developer of social robots, went to the FD in search of eyes for a robot he was developing, called Minerva.

“We manufactured two eye prosthetics for Minerva, and we started talking and thought, 'Is there really no way to make that eyelid blink?' It can be happen in a robot, "says Neide. Barretto then suggested to Oguro, his student, to work on this project for his dissertation, and the two devoted themselves to developing the system.

Barretto explains that the main challenge was to develop a system which could fit in the eye socket and with a batery which could last at least one day. It was necessary to find a small engine and maintain the entire system at a weight close to the weight of an eyeball. It was also important to achieve a low cost. “The whole should cost less than R$ 100 (about 23 pounds), and the single system should cost less than R$ 50, without purchasing in volume”.

Besides the engine and the gears, responsible for the movement, the system consists of a sensor coupled in the glasses frame, which constantly emits infrared. When the eye blinks, the infrared rays reflect on the eyelid and return to the sensor, which triggers the system so that the mechanical eyelids can blink.

Barretto ensures that the response time is very fast, that the emitted infrared radiation does not harm the eye, and that asepsis is not a problem, since the socket is covered with skin. 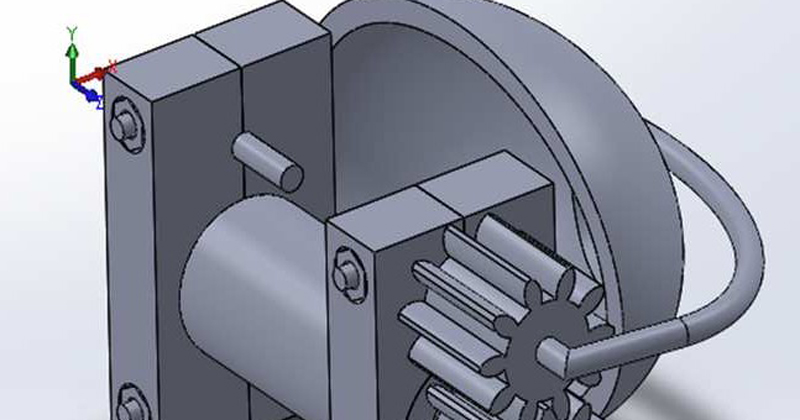 Dias reminds that the research should not stop at the prosthetics: “we are always searching new things, because alternative technology appears and, with them, new resources”. He explains that the system is safe and does not cause any harm to health. However, the system has not yet undergone testing in patients.

“Firstly, we need to obtain satisfactory results in research. We are truly concerned with the hopes of the patients, because we do not want to cause frustrations". Therefore, research to improve this system continues. Barretto says that the next step is to develop a system which can move the eye on the horizontal axis.