Home > Industries > Flying fishing… but not as you know it!
Robotics

Flying fishing… but not as you know it!

Fishing is one of the most popular recreational activities in the UK, with one in five of the population participating, according to figures from the Environment Agency. Much of its attraction is the almost primal format on which the ‘sport’ is based. Many an angler will wax lyrical about the attraction of a deserted river bank, and the ancient battle between man and beast.

By and large, the equipment used for fishing has changed very little over the centuries. Although the materials used for making rods have evolved, from wood to stronger, more flexible and durable materials such as carbon fibre and graphite, it still boils down to a rod, reel and bait. 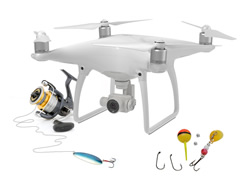 However, a new technology has been introduced into the world of angling that could tip the scales very much in man’s favour and have the fish quaking in their gills! The modern day fisherman can now add some additional power to their fishing efforts using a new package which comprises a specially designed drone boasting an electric fishing spool and a host of accessories.

The DJI Phatom 4: Fishing Edition, created by DronesDirect.co.uk, the UK’s largest online drones e-tailer, can be operated from up to 100m above water level with one controller. It can be controlled from up to two kilometres away and signs of fish can be viewed remotely using the live camera footage, to catch specimens weighing up to 200g.

Integrated sensors will indicate when the bait has been bitten, and will then automatically rise into the air, allowing its pilot to guide it back inshore to deliver the catch. The DJI Phantom 4 drone can remain stable in the breeze thanks to its ability to make subtle adjustments to steady itself, in winds up to 20mph, for those who want to up their fishing game. 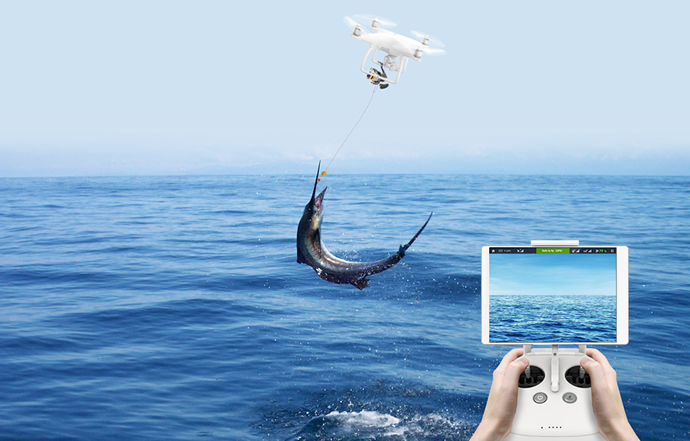 Once the catch is hooked, the gadget’s return home feature will automatically return the drone to its pilot, avoiding obstacles along the way and ensuring the catch arrives safely. Fishing enthusiasts will be able to locate the perfect spot using the integrated camera to observe the schools of fish which pass below the surface of the water.

Tim Morley, Managing Director at DronesDirect.co.uk said: “For those who enjoy fishing, the DJI Phantom 4: Fishing Edition is a bespoke package not to miss out on. It is a sure way to add extra excitement and an additional fun element to a great hobby, whilst allowing users to sit back, relax and reap the rewards of this drone fishing buddy.

“The new way to fish allows users to tap into schools of fish up to two kilometres from shore without the use of a boat. It also enables adventurers to explore areas of sea and terrain not covered by existing maps and plans.

“We have enjoyed creating the perfect fisherman’s companion and are delighted to be offering this package to the public.”