Keeping the public healthy - preventative care for a well society

One of the first recorded examples of real science being used to improve public health comes from the case of Dr John Snow, who in the mid-1800s successfully identified contaminated water as the cause of cholera.

His breakthrough came from systematically tracing the cases of an epidemic to a public water pump in London’s Soho district. The case is now often referred to as the Golden Square outbreak, because Dr Snow’s analysis of the cases managed to put the pump, located in Broad Street, at the centre of the outbreak. Before that, the medical society’s consensus was that cholera was caused by inhaling air contaminated with particles of decomposing matter.

Since Dr Snow’s discovery, technology has continued to shape public healthcare. Today, the threat from diseases borne through air, water and other fluids, as well as those transmitted through direct physical contact, are only too apparent. In many areas of the world, wearing a face mask and also gloves in public is common practice, even during times of low risk. More recent global events have focused public attention, as more people take greater responsibility for their own health and the health of the wider general public. So too are local and national governments, by putting in place greater measures to ensure public wellbeing.

In a broader sense, many people are embracing technology to help manage their own fitness, using wearable devices to monitor their physical activity. This has been more about fitness and less about general health, but now there are examples of how wearables are also being used to monitor vital statistics, such as heart rate, and using this trend data to predict potential conditions that may be undiagnosed.

Using technology to support wellness in this way has much wider potential, but it is still largely restricted to those people who are proactively seeking out ways to improve their physical wellbeing. There is a greater need to deliver wellness solutions to everyone, at a national level and in a way that is essentially transparent at the point of care.

The use of contactless sensing in public spaces is already well established. Hand dryers and now also taps are almost exclusively controlled using proximity sensors. This removes the need to touch surfaces that may be contaminated. These are applications enabled by simple proximity sensors, which can be based on ultrasonic, infrared or even visible light sensing.

Above: Maintaining a social distance may become the norm

Many of these applications are located in areas close to water and high humidity, which can add cost and complexity to the design if using an AC power source. Powering automatic soap dispensers and hand sanitisers using batteries can lower this design challenge. A soap or sanitiser dispenser typically uses a motor to push the liquid out of a nozzle - these motors present a high drain load to the battery, with high peak power requirements. It is important to take this into account when choosing the type of battery to fit as standard. For example, the Alkaline Intense Power range from Procell has been designed for exactly this kind of load, so can help minimise the service interval and cost of running.

More recently, there has been a large increase in the use of temperature sensing, which can be effective in detecting a fever. Elevated body temperature is one of the symptoms of an infectious disease and can easily be detected using relatively simple handheld infrared-based thermometers. These give near instant results, can be used at a safe distance and do not require extensive training.

The technology used here typically employs the thermopile effect, which describes a material that can produce a voltage based on the amount of energy it is exposed to. In this case, the energy would be in the form of IR energy radiated by a part of the body. Thermopiles typically produce very low voltages, in the range of μV per °C, so the design of the sensor is critical to the efficacy of the temperature scanner.

Measuring the surface temperature of skin, or inside the ear, for medical reasons is covered by the ISO standard IEC 806019-2-59:2017, so when developing this kind of application, it is important to select a sensor that will support this requirement. An example here includes the thermometric infrared (IR) sensors from Amphenol, which integrate the thermopile, IR filter and a thermistor to provide temperature compensation, all in one, small, hermetically sealed package in a TO style can. Sensors such as these support various applications, including handheld temperature scanners, as well as scanning kiosks.

Thermopiles can also be implemented using MEMS technology, in the form of small systems-in-a-package. These devices can also integrate signal conditioning ASICs that produce a convenient I2C output, making it even simpler to design temperature sensing devices. The D6T family from Omron is a good example of this.

Something that has become more important in recent times is the need to maintain higher levels of hygiene in public spaces. One innovative company addressing this need has developed an autonomous drone equipped with ultraviolet lights. The science involved indicates that 3mJ of energy in the UVC bandwidth can provide greater than 99% disinfection to an area of 1x1cm. The drone, developed by Digital Aerolus, is called the Aertos 120-UVC. Flying the drone at a height of two metres for three minutes will disinfect a surface area of 2x2m, as well as all of the air between the surface and the drone.

Drone technology is also being employed to monitor the health of people in public spaces. Researchers at the University of South Australia have developed a solution that can be mounted to a drone and mingle with crowds, looking for people with elevated heart and breathing rates, as well as measuring their body temperature. The image processing algorithms used can also identify people who may be coughing and sneezing more than average. 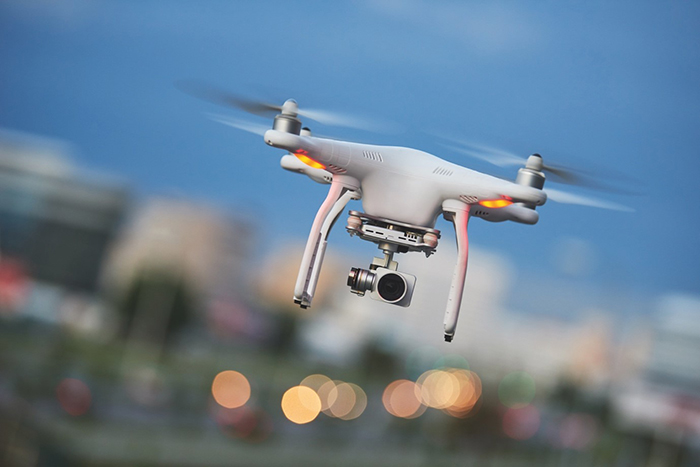 Above: Drones can be adapted to disinfect areas using ultraviolet light or alternatively to monitor the health of people in public places

A similar device, but one that uses AI, was developed by researchers at the University of Massachusetts Amherst. Based on a Raspberry Pi, it uses a thermal camera and microphone array to capture sounds (but not, the team points out, speech) which are processed by a deep neural network to identify coughs and sneezes.

Another example of how UVC light can be used to provide protection comes in the form of the ProtectiveAir breathing device, manufactured by UK company Medi-Immune. The ProtectiveAir device is worn by the user and comprises a belt-mounted irradiation chamber connected to a face mask. As air is drawn into the chamber the UVC light source cleans the air before it is inhaled by the user.

We are all familiar with the concept of social distancing, but it is difficult to predict when it may next be enforced, or for how long. Maintaining a social distance may become the norm. This is an ideal application for innovative solutions, like the SafeDistance device from Lopos, a spin-off from IMEC and Ghen University. The Lopos device uses ultrawideband technology to provide a resolution of around 15cm. That means that once it comes within a predefined distance of another unit (with a tolerance of 15cm), it alerts the wearer using audible and visible indicators, as well as vibrating.

One of the main design challenges involved with this kind of device isn’t necessarily the way proximity is measured, but how that information is conveyed to the user. If the device is wearable – and in order to be useful yet unobtrusive, it probably needs to be – it must be small and easy to use. It doesn’t need to provide a lot of information, just an alert when the proximity limits are about to be reached. In this scenario, vibrating alerts can be highly effective. One of the simplest ways to implement a vibrating alert in a low-profile device is to use an actuator based on piezoelectric material.

This kind of user interface is generally referred to as haptic and can be implemented using various devices, such as the PiezoHapt actuator from TDK. It works by applying an alternating voltage across a ceramic substrate, sandwiched between two metal electrodes. The Piezo effect causes the substrate to flex back and forth, which in turn deforms the electrodes, leading to a vibration that alerts the user. Devices like this can react much faster than those using a rotating mass to create a vibration, takes less volume and operates at lower power, making them suitable for small, wearable devices.

The subject of health and wellbeing is moving closer to home, through technology that allows us to take greater control over our own safety and medical care. In addition to any regulatory medical standards that must be met, the key design requirements here are not unfamiliar; size, power efficiency, portability, reliability and, increasingly, convenience.