Our website is made possible by displaying online advertisements to our visitors. Please consider supporting us by disabling your ad blocker.
Home > Industries > Is there a computer in the house?
Medical

Is there a computer in the house?

Steve Rogerson looks at how the IoT is affecting the medical industry and asks whether the days of the human doctor may be numbered. One of the most prominent areas being impacted by the Internet of Things (IoT) is medical technology, with the promise of remote patient care and people being treated at home whilst being linked to medical staff over various communications links.

However, in reality, the bulk of medical applications have so far been confined to the consumer electronics side, with gimmicky wearables that measure the number of steps people walk.

While anything that encourages people to be more active has to be welcomed, these wearables are a long way from the connected health world that is being envisioned. There are movements for this to change however. Only last month, Paul Thomas, CTO for health and care at Microsoft Services, called for consumer personal health devices to be brought into mainstream medical care.

“This is the time when you should be seriously looking at bringing consumer devices into the medical world,” he told delegates at the Future of Proactive Healthtech conference at Nottingham’s Medicity biotech incubator. He cited recent collaborative studies that measured stress levels with police officers and monitors that were used to track the pattern of seizures for people with epilepsy. “This can be done with a £160 wearable device and some clever software,” he added.

The problem is that while individual studies can produce beneficial results, before this can become more widespread some serious joined-up thinking is needed in the medical world. And, in fairness, the big players in the medical industry are trying and – in some cases – implementing IoT-based medical technology.

“It is more than just connecting devices,” said CK (Carla-Krystin) Andrade, Director of Product Management for the Philips Healthsuite platform. “It is not just tying everything to the internet and then having lots and lots of data. The key is to put in some critical devices and mix that with critical data and make informed decisions about care. It has to be combined with expertise in healthcare.”

David Hughes, CEO at HCC Embedded, added: “It is starting to happen that things are getting connected to the internet and that opens up possibilities for the medical industry. They have been wanting more home-based care. The IoT gives much closer monitoring of data.”

Monitoring patients is obviously nothing new. Intensive care units measure all vital signs around the clock and doctors are on hand at the first indication of a problem. The difficulty is continuing to monitor a patient when they are in less intensive areas of the hospital and after they have been discharged. 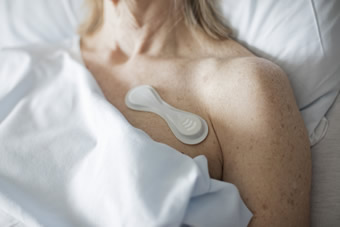 “When they go home, you need a way to monitor the high risk patients,” said Andrade. “This is not just about getting sensor data but an insight into the data so healthcare providers get key alerts. The medical industry is good in intensive care but when you discharge them you still need a level of monitoring. That is where you have the value add from the IoT.”

There are, however, two main issues that need addressing. One is the speed and reliability of the connection and the other is data security. The feeling in the industry is that Bluetooth is going to become more important in this field to link the monitors on the patient to some form of home gateway, probably with local intelligence so that some data processing happens quickly in the home allowing priority messages to be sent up the line when there is a problem.

“The use of Bluetooth is increasing and microcontrollers are improving, so we can do much more with the data,” said Hughes.

The data security issue seems strange in this context as most people’s medical data is of little or no interest to anyone else. However, there have been cases of people maliciously hacking into people’s records. Plus, if the person is for example, a candidate in an election then opponents could use medical information to their advantage. Even on a lower scale, with two people going for the same promotion, knowledge of a rival’s medical conditions could be used against them. Insurance companies could check that claims are honest without the person’s permission. Plus, many people just don’t want others to know what is wrong with them.

“This is a concern and something that needs safeguards,” said Andrade. “You need the secure channels to make sure that patient information is not floating around.” However, Hughes believes that not enough is being done to address these concerns. “The medical industry has paid lip service to security,” he said. “It is very uneven. Hospitals use protocols for data exchange with no security. It is very dangerous. For example, someone could try to get a list of people with HIV and start a hate campaign. Privacy goes out of the window if you don’t do security.”

He acknowledged there was a cost involved with this but said the cost was not huge when compared with the cost of medical devices. “But the medical industry has lagged way behind in software compared with other industries,” he said. “They only kill people one at a time so the statistics don’t get recognised. If a plane crashed due to a software problem, there would be an outcry, but you don’t see that with medical.”

Where improvements are needed is in the actual monitoring devices themselves - they need to be smaller and more accurate.

“They need to be less cumbersome if they are to be a part of people’s daily lives,” said Andrade. “We are seeing a movement towards multi-sensor devices with a greater level of accuracy.”

These devices also need to be powered, not just for their operation but also for communications. Whereas some can be powered from the mains, many will need to use either batteries or energy harvesting, and sometimes they need to switch between them. “Medical products must operate properly and switch seamlessly between a variety of power sources such as an AC mains outlet, battery back-up and even harvested ambient energy sources,” said Tony Armstrong, Director of Product Marketing at Linear Technology. “Furthermore, great lengths must be taken to protect against and tolerate faults, maximise operating time when powered from batteries and ensure that normal system operation is reliable whenever a valid power source is present.”

This, said Armstrong, meant that “great care” must be taken when designing the power management architecture.

“It must be robust, flexible, compact and efficient,” he said. “It is clear that a system architect of wireless medical instrumentation faces many technical hurdles when designing a medical system for in-home patient care. The issue of potential noise interference must be mitigated, a battery back-up operational capability is needed in case the main power source fails and the size and cost have to be kept under control.”

While direct remote patient monitoring is slowly beginning to take hold, remote diagnostics have and will continue to take-off in a big way. Already, in the US so-called telemedicine, where patients have consultations with doctors over some form of video conferencing, is becoming widespread. When this is combined with monitoring data and the analytics become more reliable, then the prospect of taking the doctor out of the loop for many examinations becomes a real possibility. Software for diagnostic purposes already exists and is often more accurate than a human doctor. The big question is trust. “Once people realise they can get better service from a computer than they get from a doctor, they could get rid of a large number of doctors,” said Hughes. “People once were concerned about ATMs, but they kept putting them out and people started using them more and more and realised their advantages. The same is going to happen with driving cars. And with medical.”

While the vision of no more human doctors is still in the realms of science fiction, the path towards that has undoubtedly started as has the path towards autonomous driving in automotive. In neither case will there be a revolution, but an evolution as trust is built-up with patients and the equipment over time. How long is anyone’s guess, but we are already seeing the technology being used for reducing the amount of times people need to visit the hospital or doctor’s surgery, we are seeing more intensive monitoring of patients’ vital signs, and we are seeing breakthroughs in size, reliability and power. Many issues still need to be tackled, but the journey has begun.