Brain rewires itself to adjust to advanced prostheses

EPFL scientists from the Center for Neuroprosthetics have used functional MRI to show how the brain re-maps motor and sensory pathways following targeted motor and sensory reinnervation (TMSR), a neuroprosthetic approach where residual limb nerves are rerouted towards intact muscles and skin regions to control a robotic limb.

Targeted motor and sensory reinnervation (TMSR) is a surgical procedure on patients with amputations that reroutes residual limb nerves towards intact muscles and skin in order to fit them with a limb prosthesis allowing unprecedented control.

By its nature, TMSR changes the way the brain processes motor control and somatosensory input; however the detailed brain mechanisms have never been investigated before and the success of TMSR prostheses will depend on our ability to understand the ways the brain re-maps these pathways.

Now, EPFL scientists have used ultra-high field 7 Tesla fMRI to show how TMSR affects upper-limb representations in the brains of patients with amputations, in particular in primary motor cortex and the somatosensory cortex and regions processing more complex brain functions. The findings are published in Brain.

Targeted motor and sensory reinnervation (TMSR) is used to improve the control of upper limb prostheses. Residual nerves from the amputated limb are transferred to reinnervate and activate new muscle targets.

But how does the brain encode and integrate such artificial touch and movements of the prosthetic limb? How does this impact our ability to better integrate and control prosthetics? Achieving and fine-tuning such control depends on knowing how the patient’s brain re-maps various motor and somatosensory pathways in the motor cortex and the somatosensory cortex.

The lab of Olaf Blanke at EPFL, in collaboration with Andrea Serino at the University Hospital of Lausanne and teams of clinicians and researchers in Switzerland and abroad have successfully mapped out these changes in the cortices of three patients with upper-limb amputations who had undergone TMSR and were proficient users of prosthetic limbs developed by Todd Kuiken and his group at the Rehabilitation Institute of Chicago. 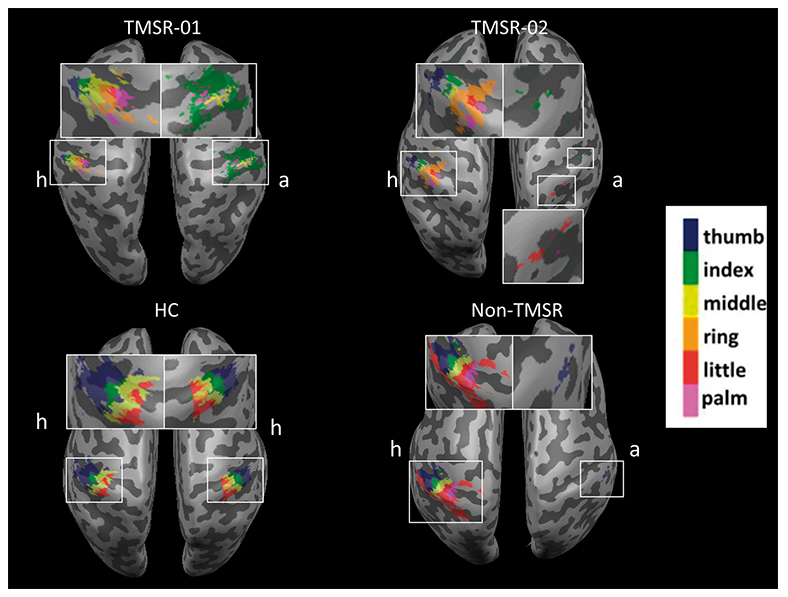 The scientists used ultra-high field 7T functional magnetic resonance imaging (fMRI), a technique that measures brain activity by detecting changes in blood flow across it. This gave them an unprecedented insight at great spatial resolution into the cortical organization of primary motor and somatosensory cortex of each patient.

Surprisingly, the study showed that motor cortex maps of the amputated limb were similar in terms of extent, strength, and topography to individuals without limb amputation, but they were different from patients with amputations that did not receive TMSR, but were using standard prostheses. This shows the unique impact of the surgical TMSR procedure on the brain’s motor map.

The approach was even able to identify maps of missing (phantom) fingers in the somatosensory cortex of the TMSR patients that were activated through the reinnervated skin regions from the chest or residual limb.

The somatosensory maps showed that the brain had preserved its original topographical organization, although to a lesser degree than in healthy subjects. Moreover, when investigating the connections between upper-limb maps in both cortices, the researchers found normal connections in the TMSR patients, which were comparable with healthy controls.

However, preservation of original mapping was again reduced in non-TMSR patients, showing that the TMSR procedure preserves strong functional connections between primary sensory and motor cortex.

The study also showed that TMSR is still in need of improvement: the connections between the primary sensory and motor cortex with the higher-level embodiment regions in fronto-parietal cortex were as weak in the TMSR patients as in the non-TMSR patients, and differed with respect to healthy subjects.

This suggests that, despite enabling good motor performance, TMSR-empowered artificial limbs still do not move and feel like a real limb and are still not encoded by the patient’s brain as a real limb.

The scientists conclude that future TMSR prosthetics should implement systematic somatosensory feedback linked to the robotic hand movements, enabling patients to feel the sensory consequences of the movements of their artificial limb.

The findings provide the first detailed neuroimaging investigation in patients with bionic limbs based on the TMSR prosthesis, and show that ultra-high field 7 Tesla fMRI is an exceptional tool for studying the upper-limb maps of the motor and somatosensory cortex following amputation.

In addition, the findings suggest that TMSR may counteract poorly adapted plasticity in the cortex after losing a limb. According to the authors, this may provide new insights into the nature and the reversibility of cortical plasticity in patients with amputations and its link to phantom limb syndrome and pain.

Finally, the study also shows that there is a need of further engineering advances such as the integration of somatosensory feedback into current prosthetics that can enable them to move and feel as real limbs.