Micro-LED technology has been exciting the trade and consumer tech press for several years now, particularly since 2014 when Apple purchased the micro-LED-focused startup, LuxeVue. The implication that leading tech firms were racing to incorporate micro-LED in their highly desirable consumer tech prompted a flurry of speculation that micro-LED would be the ‘next big thing’ in TVs, smartphones, wearables and much more.

That hasn’t happened - yet. But in the past few years the likes of Sony, LG and Samsung have demonstrated large-scale micro-LED screens, while other firms have brought various micro-LED prototypes to market, and still more have expressed plans to do so.

Micro-LED is exciting the markets and commentators, but the question of whether, and how, it will become the natural replacement for other LED technologies, including the currently dominant LCD and OLED, is somewhat complex.

In a new study, 'Micro-LED Displays 2020–2030: Technology, Commercialisation, Opportunity, Market and Players', IDTechEx reveals how gaps in the current supply chain and manufacturing capabilities may on one level be seen as hindering progress, but are, simultaneously, generating great opportunity.

Micro-LED displays are descended from the traditional LED displays that are still widely used, for example, in departure boards at stations and airports. Micro-LEDs act as pixels and emit light themselves, and are thus described as ‘self-emitting’. As the name suggests, micro-LED uses much smaller LED chips than its predecessors. There is no formally agreed definition, but generally a micro-LED chip is less than 100 micrometers (i.e., has an LED emission area per pixel below 100 X 100 micrometers).

The size and nature of micro-LEDs convey several advantages when used in display screens. Their colour gamut is superb, with perfect blacks and brightness above 1 million nits. A micro-LED screen can be exceptionally thin, with resolution as high as 6,000 PPI, and has a wide viewing angle. What is more, micro-LED screens have a long lifespan, can be flexible and/or transparent, and can incorporate sensor technologies (such as biometric sensors to unlock the screen in a smartphone display).

Furthermore, unlike traditional LED screens which are huge and visibly lose resolution as the viewer gets closer, micro-LED displays retain their sharpness regardless. In addition, they can be used in a wide range of screen sizes (in other words, they are eminently scalable). Figure 1 illustrates the capabilities of micro-LED displays vis-à-vis other display technologies.

But given this situation, why are micro-LED displays not ubiquitous?

Why the wait for micro-LED?

As an emerging technology in the early stages of maturity, micro-LED displays are currently expensive and hard to make. For this to improve, and for the potential cost savings and efficiency gains of micro-LED to be fully realised, innovation and evolution of various techniques is required.

For example, processes that would scale up manufacturing would be advantageous to the market. So would better chip transfer, repair, inspection and light management techniques.

Meeting such challenges need not be particularly complex or risky: many components are based on existing and mature manufacturing processes. Thus, it may be seen as an opportunity open to many firms in relevant fields. If micro-LED manufacturing can be improved, a world of applications and thus, commercial potential, will open up. 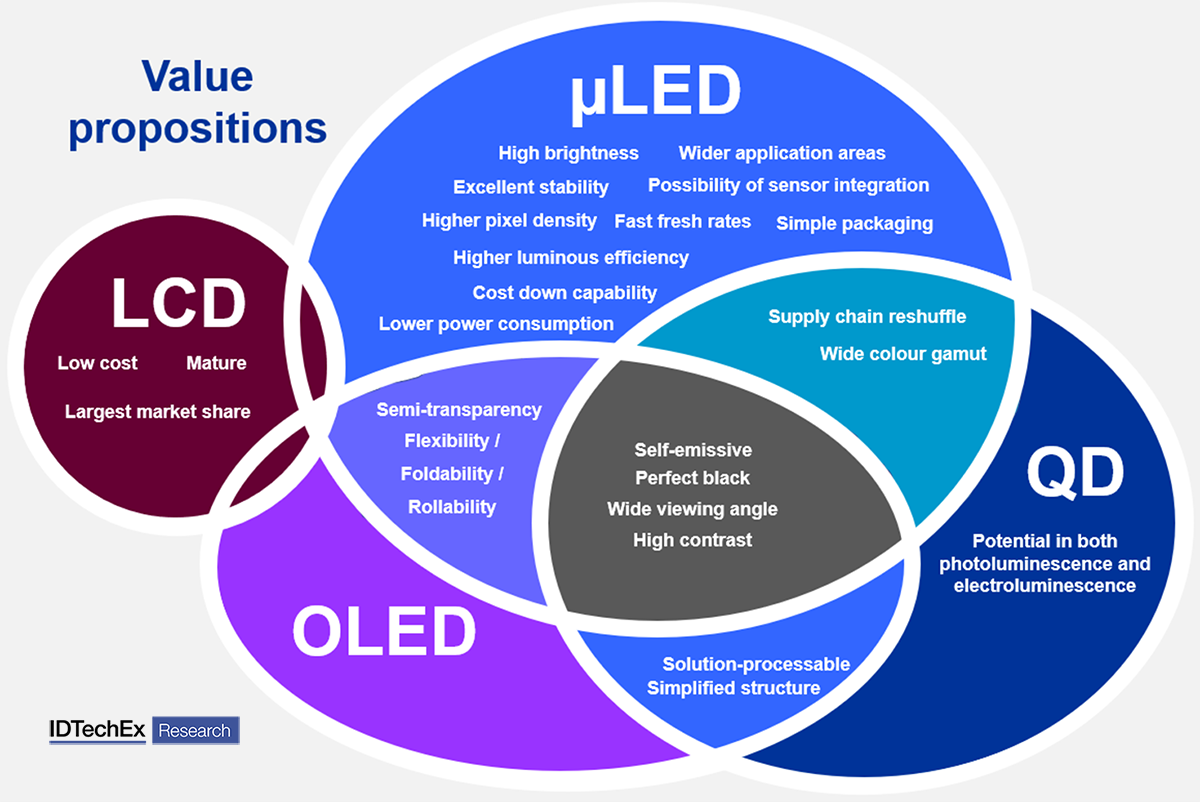 What are the opportunities in the micro-LED market?

In line with this, there are many opportunities for players in and around the display tech sector. However, any firm or individual interested in this market will of course need a thorough understanding of processes and context, to make good strategic decisions.