Home > Industries > Lights-out manufacturing less than a decade away
Lighting

Lights-out manufacturing less than a decade away

According to the Lux Tech Signal, there has been a steady rise in activity and interest in lights-out manufacturing from stakeholders in the past five years, and ideas developed in the late 20th century are now seeing a resurgence because of modern technologies like advanced robotics, computer vision, industrial IoT, machine learning algorithms, and improved computing. Similarly, funding in robotics and automation in manufacturing has also increased significantly since 2015. While most of the funding is in the form of VC investments in emerging startups, public companies have also raised millions in post-IPO funding, with North America and Asia being the two biggest investors in robotics and automation for manufacturing. 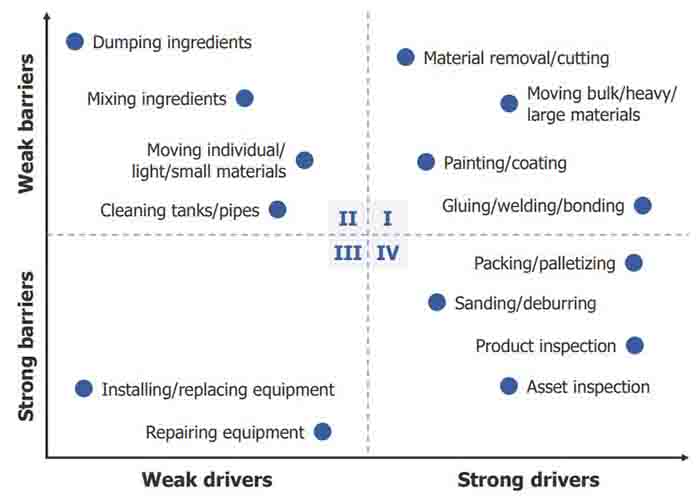 “Achieving lights-out manufacturing will require the use of robotics technologies to automate physical processes, such as moving materials, cleaning tanks, and inspecting products and assets, alongside software-based automation of logical processes,” explained Miraj Mainali, Senior Research Associate at Lux Research and lead author of the report. “While there are dozens of robotics technologies that can automate physical tasks, we have identified the most important ones, including robotic arms, autonomous mobile robots (AMRs), and legged robots, and assigned their average technology maturity based on findings from interviews in addition to our other research in the space.”

In addition to the most influential robotics technologies, Lux also identifies the main drivers of and barriers to lights-out manufacturing. Once identified, the drivers’ and barriers’ significance is evaluated. The combination of the technological maturity and the significance of the drivers and barriers in play for a given lights-out manufacturing task allows Lux to create a scatter diagram, weigh the benefits of the automation of each task, and place it on a timeline.

Based on the report’s findings, Lux predicts that most manufacturing tasks requiring one or two highly mature robots will be automated between the late 2020s and the early 2030s. However, highly unstructured tasks like equipment repair and installation will probably always require some human intervention and never be fully automated. While achieving lights-out manufacturing is the ultimate goal for many manufacturing companies, it might not be realistic because of the many challenges involved and the lengthy timeline.

Download the executive summary of the report to learn