One wire communication between two SLG46811

Many devices within the same design can communicate using different protocols (SPI, I2C, etc.). As is to be expected, most of these protocols require several dedicated lines for communication. However, there are many different applications in which the number of available wires is strictly limited and often times only one wire is available to send the data.

The goal of this article is to highlight methods in which data can be effectively transmitted between two GreenPAK devices using only a single wire. In order to create the data transmission, two SLG46811 ICs will be used, connected by a communication line. Small size and great functionality combined with low current consumption and cost make the SLG46811 one of the most capable GreenPAK ICs for this kind of application, and can be easily applied for use in devices such as headphones, cellphones, wearables electronics, consumer electronics, handheld devices, and more.

How does the transmission work?

This section and any following sections contain the body of the document. Subsections can be added as required. Quick Parts are available for numbered equations, landscape pages, notices and tables.

The idea is based on using two separate ICs (two SLG46811), both featuring configured bidirectional PINs, and these two PINs are connected by one communication line (Figure 1).

In order to understand the principles of transmission, let's split the functionality into two parts. The first part is dedicated to the IC that transmits first, and the second part to the IC that receives first. The transmitter reacts at the Start event and pulls the line LOW for a certain time, which signals the receiver to prepare for a data stream.

By default, the whole communication consists of 20bits (16bits transmitted and 4bits received), but it can be easily expanded to 32bits both directions. 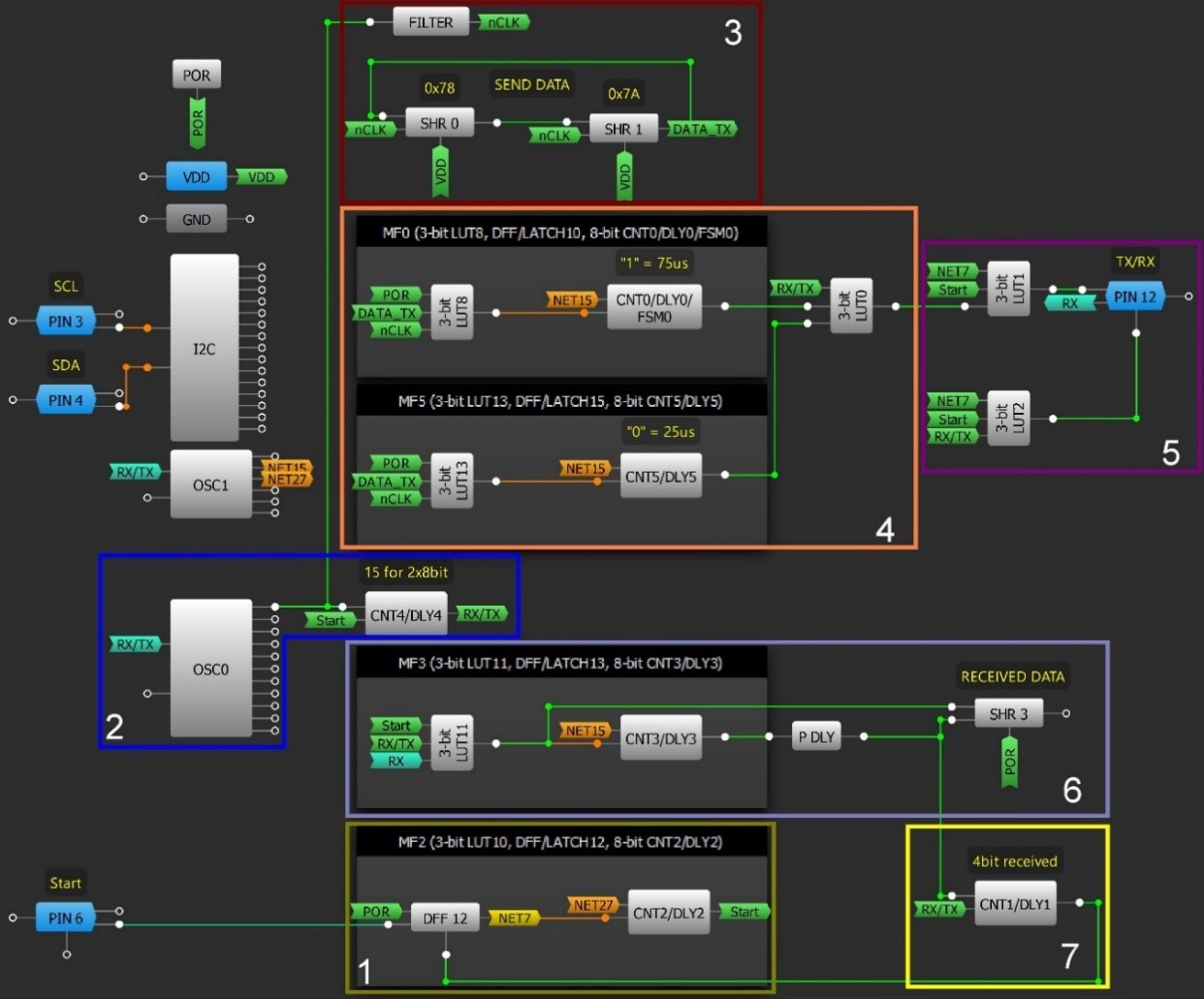 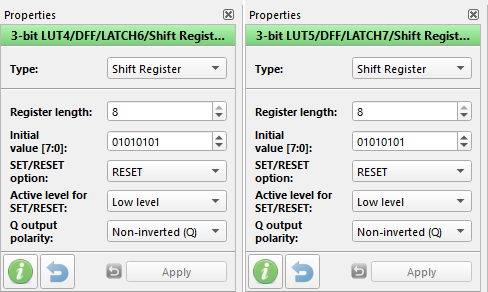 In order to create the cycled data generator, the output of SHR 1 is connected to the D input of SHR 0. By clocking the shift registers, the output data will continuously be changing.

This design in Figure 6 shows how the receiver is implemented. The main parts of the design are located in the highlighted sections. Let’s go through each of them to explain out how it works. 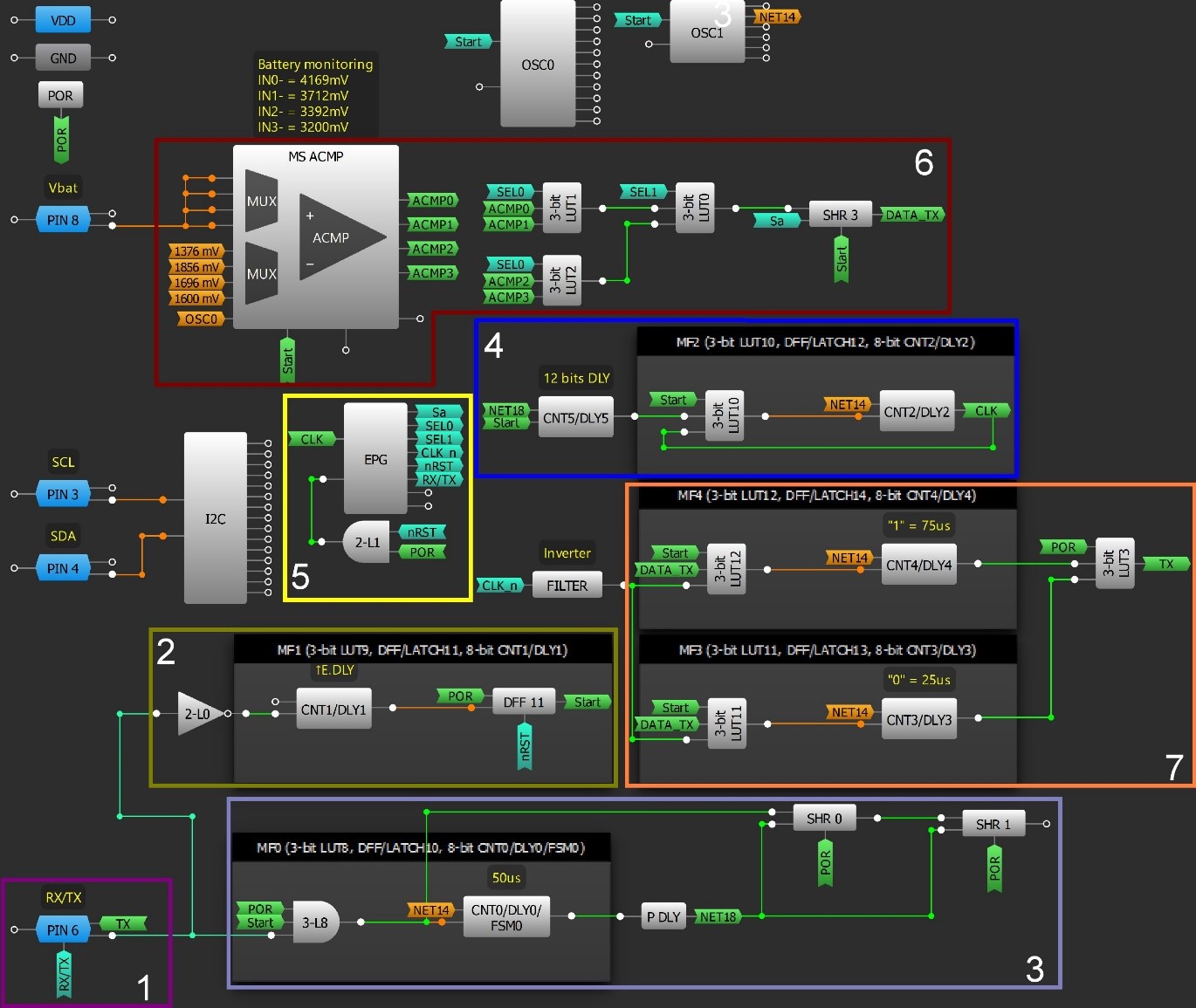 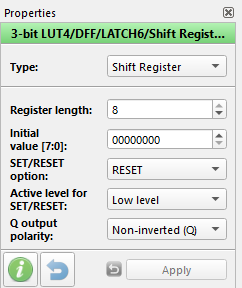 In this design, the EPG performs a conjunctive function, synchronising several parts of the design and creating the needed signals for the protocol transmission. It generates the clock for the voltage bit streaming and coding, changes the PIN’s OE for ‘1’ to ‘0’, and restarts the whole system after the receiving/transmission has completed. The properties of this design's EPG are shown in Figure 8. 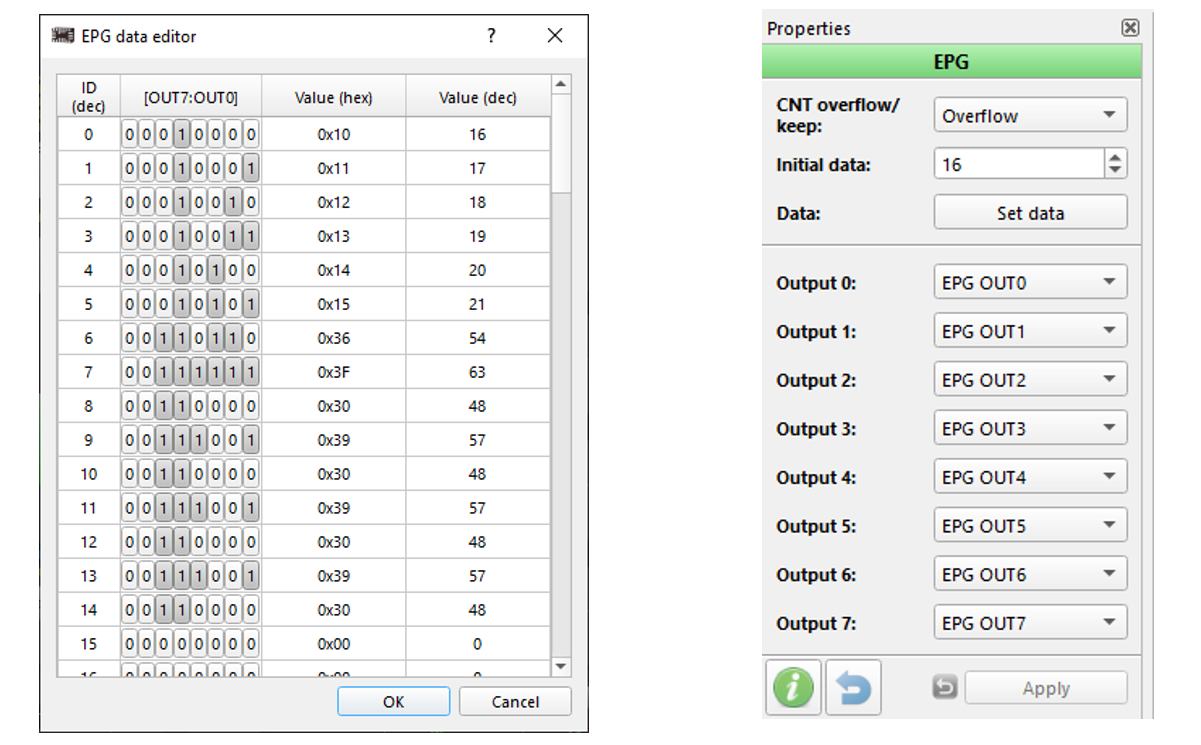 The timing diagrams in Figure 9 display how the voltage sampling and shifting is implemented.

Upon detection of the start bit, the MS ACMP starts measuring the voltage and latches the corresponding outputs. The goal is to store the voltage data and shift it serially. For this purpose, SHR3 is used. When a rising edge is detected by the CLK input of the shift register from an EPG signal (called Clock ‘Sa’) one of the ACMP channel outputs is clocked into the shift register. 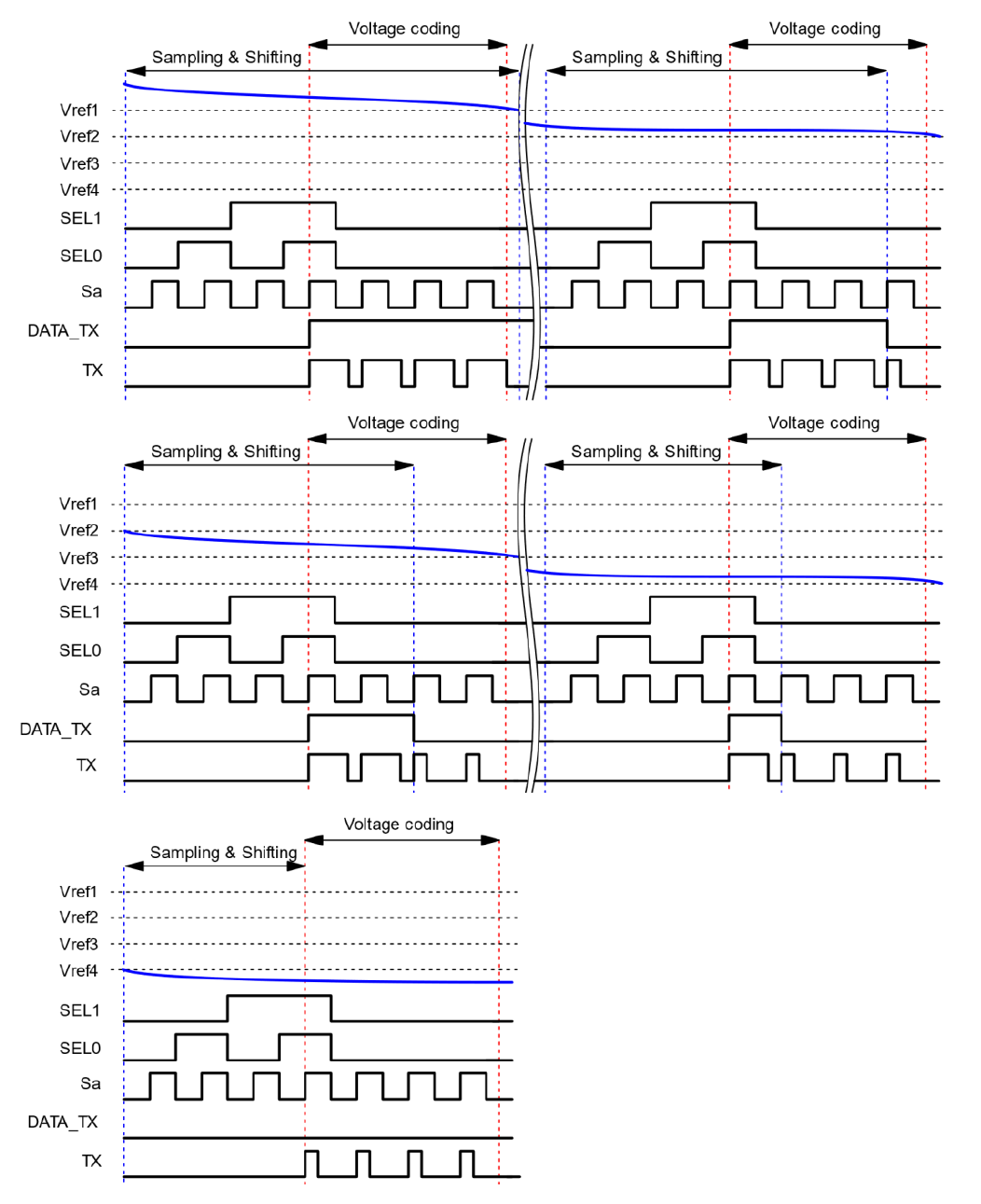 Both designs were tested with hardware. Data coded in transmitter, and Voltage code, are shown and described below (it is considered that waveforms are taken from the SLG46811 which transmit first).

Dialog GreenPAK products are an ideal solution for the development of 1-wire communication protocol realisation.  These ICs contain the large number of functional elements necessary for implementation of a variety of circuit design solutions. There are more than 50 ICs in the GreenPAK product family, in which each IC has its own special features and functions.

This, in turn, allows a significant reduction in the number of external circuit elements, and even allows for the creation of a system with highly specific requirements. Additionally, GreenPAK products feature the potential for very rapid design time and a very high level of configurability while showcasing low power consumption, small board area, and low cost.

The complete design file created in GreenPAK Designer software available for free can be found here.