Home > Industries > Industrial sector must be retrofitted to decarbonise
Industrial

Industrial sector must be retrofitted to decarbonise

In a world where climate change is increasingly influenced by industrial emissions, decarbonising the industrial sector becomes the immediate priority to phase out CO2 emissions from the use of fossil fuels.

Against this backdrop, retrofitting carbon capture, utilisation and storage (CCUS) technologies to existing industrial infrastructure will become crucial to reaching net zero by 2050, according to GlobalData, a leading data and analytics company.

GlobalData’s Disruptor Intelligence Center observes that a growing number of popular companies across major CO2 emitting industries, such as energy & utilities, steel, and transportation, have announced their decarbonisation commitments.

Vaibhav Gundre, Senior Disruptive Tech Analyst at GlobalData, notes: “While oil supermajors such as Shell and steel tycoons like ArcelorMittal are targeting to achieve net zero by 2050, automotive giants such as Toyota are aiming to be carbon neutral by the same timeline. Interestingly, tech titans such as Google, which have been carbon neutral since 2007, set their eyes on an even more ambitious target of running 24/7 on carbon-free energy.” 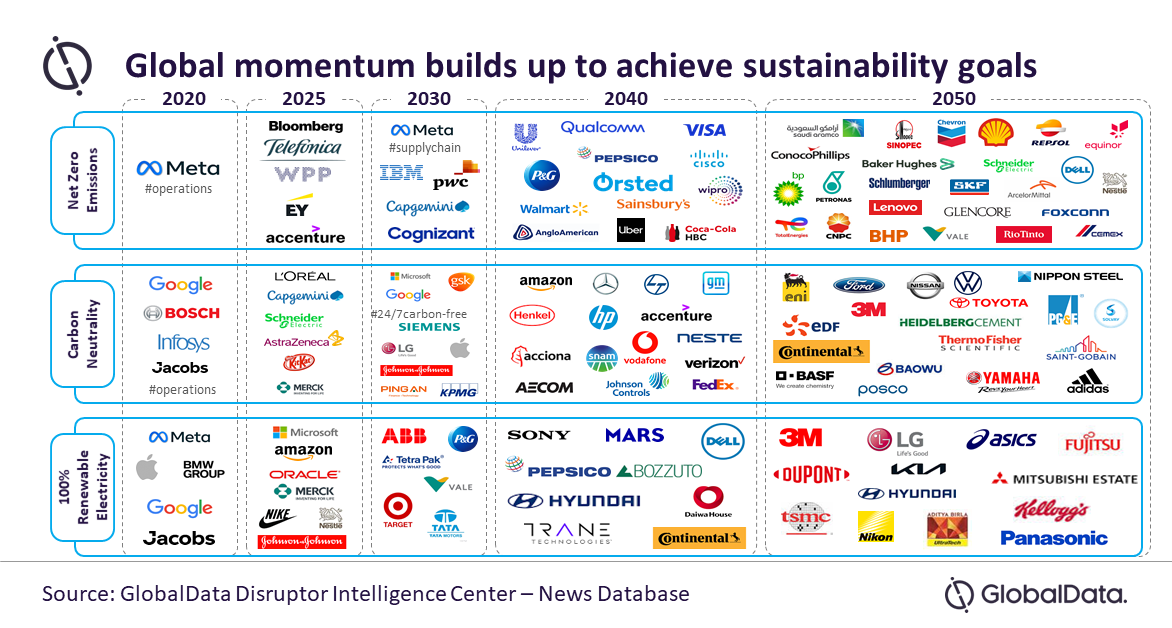 Shell plans to achieve net zero emissions in its energy business by 2050 in line with the Paris Agreement on climate change. It aims to build the Polaris CCS project in Canada with a capacity to store 300m tons of carbon over its lifetime, and capture emissions from Shell's Scotford refinery and chemical plant.

ArcelorMittal plans to become net zero by 2050 by capitalising on climate-friendly policies in Europe. In December 2021, the company's XCarb Innovation Fund made its fourth investment worth $30m in CCUS specialist LanzaTech to leverage its technology for the company's Carbalyst Plant in Belgium.

Toyota has rolled out a strategy to cut down carbon emissions from its operations, suppliers, and dealers, as well as reduce 90% of carbon emissions from new vehicles against 2010 levels by 2050. The company’s Central R&D Labs is exercising for the production of syngas by utilizing CO2, water, and sunlight.

Gundre concludes: “Industrial decarbonisation will gain momentum as companies respond to growing pressure from regulators, investors, and stakeholders to decarbonize their operations. New business models such as carbon capture as a service (CCaaS) will gain prominence as they can be retrofitted into existing industrial plants and thereby save infrastructure replacement costs. Such efficient technologies supported by smart policies and robust investments can aid to achieve net zero by 2050.”