Recently, Balloon One performed some data analysis to see how successfully the UK is using automation within industry in comparison to other countries around the world. And, according to the findings, the country is not only lagging behind when it comes to automation, but its productivity is suffering as a result.

To get an insight into how the UK is using industrial robots compared to other nations, Balloon One looked at data from the International Federation of Robotics for robot density (number of industrial robots per 10,000 workers) alongside each country's productivity (Our World in Data) and how reliant each was on manufacturing as part of its GDP (The World Bank).

Balloon One then directly compared the data for each nation to see if greater robot density was linked to increased productivity, as well as looking to see if this was affected by how dependent a country is on its manufacturing industry. Initially, the company compared the UK to ten other nations that have a similar reliance on manufacturing as part of their GDP (ten to 15%), and then took a wider view by splitting the countries into three tiers based on their robot density and calculating and comparing the averages.

First, Balloon One compared the UK to ten other countries with similar manufacturing outputs to try and get a snapshot of how the nation is performing when it comes to robotics. As you can see in the chart above, not only is the UK using fewer robots per 10,000 workers than countries like France, Spain, and Italy, but our productivity levels are much lower, arguably as a result.

Next, Balloon One took the data from across the board to try and get a bigger picture as to whether robots were crucial for productivity and whether this was impacted by the reliance of manufacturing. 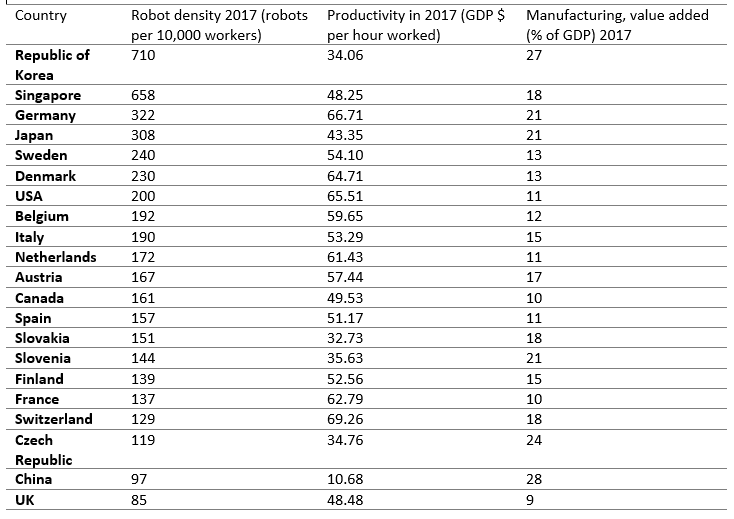 From this data, Balloon One was able to calculate averages based on three tiers of robot density:

Looking at these averages, you can see that nations with a robot density of 150 or more per 10,000 workers are able to achieve a higher level of productivity than those with a lower density. This analysis also demonstrates that a country's reliance on its manufacturing industry, where better infrastructure could play a part in increased productivity, is not a factor. The higher productivity of nations is not skewed towards those with more manufacturing — in fact, on average, reliance on this sector is higher (17.86%) in less robot dense nations.

Taking this analysis to its final conclusion, there does seem to be a link between robot density and higher levels of productivity. In theory, if the UK was able to boost levels of automation in industry, it may well stand a much better chance of enjoying the greater productivity of those nations with a robot density of 200 and over. Looking back to our comparison of ten nations with a similar reliance on manufacturing that were using more robots, this would certainly seem to be the case.

This analysis certainly seems to show the value of industrial robots when it comes to productivity, but it's also important to remember that there is a much wider scope for automation across a lot of sectors. For instance, within the supply chain and logistics industry, we've seen the benefits of robot and human working together first-hand. Whether it's an autonomous mobile robot guiding a worker around a warehouse on the most efficient route, or robots with scanners carrying out basic sorting activities, there is plenty of scope for improved productivity. Taking this ingenuity that's already seeing quick take up and applying it across all sectors is the next logical step.

Balloon One believes that the UK is capable of taking this next step when it comes to automation, and there is no reason the UK can't be among the leading nations in the world when it comes to productivity.