Ethernet and Internet Protocol (IP)-based networks are everywhere. You can find them in standard computer networks as well as in automotive, IoT and all kinds of automation applications. It has been around for almost 50 years. Henry Muyshondt, Senior Manager, Microchip Technology explains.

It provides scalable bandwidth from a few megabits per second, up to multiple gigabits per second, over several different physical media. There are proven software stacks available to ensure reliable transmission over the medium.

Security and safety are essential to this technology and there are well defined frameworks for including them in Ethernet-based systems.

The service oriented architecture of Ethernet helps manage complexity by encapsulating functions and data. Many systems can easily talk to each other using a unified communication mechanism that is reusable and allows for easy movement of services to the appropriate location in the network.

In the past, many different technologies have been used to interconnect dissimilar devices. In the industrial automation world there are various field busses, Ethercat, RS-485, UARTs, etc. In the automotive world, MOST, CAN, LIN and other networks are used, requiring complex gateway devices to communicate between domains. In the computer server market we see I2C, GPIO, SPI and even CAN, from the automotive world, used to manage various subsystems. 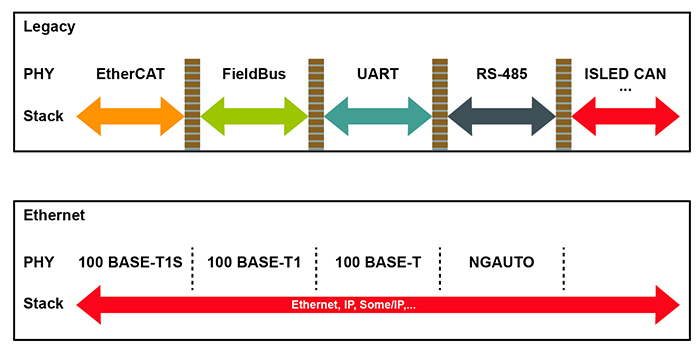 Above: Figure 1. Illustrates the advantage of an Ethernet architecture

Each of these uses its own hardware interface and implements different software stacks. EMC behaviour varies. An all-Ethernet architecture offers many advantages in that the same protocol is used independent of the physical layer. An Ethernet frame looks the same whether transmitted at 10Mbit/s or 10Gbit/s.

When scaling the bandwidth for particular applications, no complex gateways are required. Often times, a single switch can be outfitted with PHY chips that run at different speeds, and the frames can seamlessly move from one domain to another without any modification of the data.

A ubiquitous Ethernet architecture simplifies the design, configuration and control of many different applications, whether in the industrial, computer or automotive worlds. The same technical expertise can be used in different markets. The same mechanisms are used no matter how much data needs to be transferred, as the Ethernet frame is not modified for the different speed grades. There is a large ecosystem of hardware and software suppliers that specialise in all aspects of the Ethernet communication infrastructure.

The Ethernet world has already designed architectures to ensure the security and privacy of the information transported over Ethernet links. This security infrastructure is well understood.

One of the variants specified under the IEEE standard is called 10BASE-T1S. S stands for short reach. A long reach variant, called 10BASE-T1L, is also defined for distances of up to 1km. This article concentrates on 10BASE-T1S.

10BASE-T1S uses a multidrop topology where each node connects to a single cable. This eliminates the need for a switch and results in fewer cables. Each cable only uses one pair of wires, instead of the four pairs used in typical Ethernet cabling. The interconnection can even be implemented on a printed circuit board. The standard specifies that at least eight nodes can be connected, but many more are possible. It also specifies a bus length of 25m, with 10cm stubs to each node. All the nodes share the 10Mbit/s bandwidth.

Above: Figure 2. Shows the concept of sharing the bus

Microchip Technology has been a key contributor to the IEEE standards process and is ready to support it not only with semiconductor products but with application boards and the tools needed to simulate, implement and analyse a networking system.

In practice, it has been observed that round-trip delays between two nodes are less than half a millisecond, with almost the full 10Mbit/s available when using the iperf3 tool that is used to measure maximum achievable bandwidth on IP networks.

10BASE-T1S technology is getting traction in building/industrial automation, automotive and computer applications.

In industrial applications, this interconnection scheme is being deployed in many applications to provide intra-system management and to connect many devices like fans, temperature sensors, voltage monitors, etc. Even simple devices, like switches, buttons, indicator lamps, etc., can be addressed using Ethernet schemes.

In cars, a variety of sensors require lower bandwidth and benefit from a network architecture. It makes subsystems easier to expand for different trim levels of the vehicle.

Above: Figure 3. A new cycle is started when the master node sends a beacon

The computing world is seeing the need for 10BASE-T1S in intra-system management interfaces inside servers and switches, along applications for configuring and monitoring large servers. Similar to the industrial world, various devices like fans, temperature sensors and voltage monitors can be easily accessed using Ethernet.

While transmitting Power over Data Lines (PoDL) is not fully standardised yet, there are groups working on it. A new IEEE task force has been created to expand the 802.3cg specification, including adding PoDL. The 10BASE-T1S physical layer is AC-coupled so it lends itself to carrying power to remote devices.

10BASE-T1S enables the expansion of Ethernet technology to new applications with its key features:

A ubiquitous Ethernet architecture simplifies the design, configuration and control of many different applications, whether in the industrial, computer or automotive worlds.

10BASE-T1S components are becoming available in the marketplace, and new system designs are already underway to implement the new technology. The necessary tools to do this are already available.