World Electric Vehicle Day is here, presenting a great occasion to take a retrospective look at the past decade of innovation and disruption.

Indeed, with cars alone, annual sales are on pace to surpass five million this year, with 3.5 million battery-electric vehicles (BEV). If they do, it will mean a growth rate of 86% CAGR since 2011.

IDTechEx state that it is fair to say that these figures have surpassed analyst expectations. IDTechEx has been writing about electric vehicles for two decades, and back in their 2011 report they 'bullishly' predicted 1.5 million battery-electric car sales by 2021, an underestimate by over half.

Perhaps more importantly, EV markets are proving they are robust: they can grow despite a global pandemic shutting down factories and are not so much unstoppable as inevitable. If you are reading this, you are probably considering one for your next vehicle purchase (and after some quick internet searching, probably still asking 'why do they cost so much?)'.

And even if not, you will be an EV passenger soon anyway as transitions unfold across our mobility services, seas, and skies, as well as our private vehicles.

The drivers behind electric cars

For the last ten years, electric car markets have been growing. 2019 is perhaps the exception, with sales dampened by a policy transition in China and lackluster governmental support in the US (ironically, Tesla and GM sold too many EVs and lost federal tax credit eligibility).

But in 2021, IDTechEx state that the momentum behind EV markets is high, and growth is present within China, the US, and Europe auto markets.

The company claim that over the past couple of years, global EV market growth has been underpinned by Europe, driven by new emissions targets (95g of CO2 per km). Essentially, these targets make it impossible for automakers not to sell electrified vehicles without avoiding large fines.

In the US, President Joe Biden has committed $174 billion into supporting EV uptake (from charging infrastructure to topping up the federal tax credit) and is proposing a new target for 50% electrification by 2030. Sure, this is behind countries like Norway (100% by 2025) or the UK (100% by 2030), but the US auto market is much larger, claim IDTechEx. And in China, purchase subsidy schemes around for over half a decade are being extended to help break in the new energy vehicle double credit schemes moving forward.

Overall, the net effect is EV policy from around the world is pushing EVs into the mainstream this decade, creating opportunities for those operating in the EV supply chain.

Critically, while Tesla still leads market share in Europe and the US, incumbent automakers have been increasing their skin in the game. This year alone there has been over 20 announcements related to increasing targets and electrification plans, as shown in the below table.

Tesla's target is 20 million by 2030 with two-thirds global market share. But, as IDTechEx has said before, the company achieves remarkable things on the way to missing its targets. As the market becomes crowded, range will be a key area on how automakers compete for their slice of the pie.

It is often batteries that take the technology headlines, but inverters and motors are important areas too, where efficiency and weight improvements also improve vehicle range. Batteries have 20 - 30% of the overall vehicle price today, but as their costs fall, the value-add of other components is increasing, as found in the new IDTechEx report 'Power Electronics for Electric Vehicles 2022-2032'.

Indeed, technological innovations in inverters and motors, such as the shift to silicon carbide MOSFETs and high voltage platforms (over 800V), have a part to play in price parity and product differentiation as the market matures, with the potential to increase WLTP range by up to ten percent without touching the battery, as well as enabling ultra-fast 350kW DC fast charging.

At the other end of the EV spectrum are large, long-haul heavy-duty trucks (HDT). Truck OEMs are under growing pressure to reduce emissions, as one of the largest on-road contributors to them. Whilst we continue to wait on the Tesla Semi (whose launch has now been further delayed until 2022), the work of OEMs such as Daimler, Volvo, and Scania continues to move on at pace.

Unlike cars, concerns have been raised about the feasibility of deploying battery-electric trucks, especially in long-haul applications, as the energy density of current lithium-ion batteries becomes a limiting factor.

However, this challenge is promoting the development of fuel cell (FC) technologies that offer OEMs an avenue to a greater range in heavy-duty applications, whilst (in some scenarios) still achieving low or zero emissions. Using hydrogen as fuel, fuel cells generate electricity on-board a vehicle, providing the primary power source to drive the electric traction motors, or alternatively, acting as a range extender that charges the traction battery during operation.

But fuel cells are not a silver bullet for heavy-duty transport: hurdles need to be overcome for them to become viable. IDTechEx claim that aside from the typical technical and economic challenges that accompany any new automotive technology, critical to the success of fuel cell vehicles will be the rollout of hydrogen refueling infrastructure and the production of cheap 'green' hydrogen - low carbon hydrogen made from renewable electricity and water. 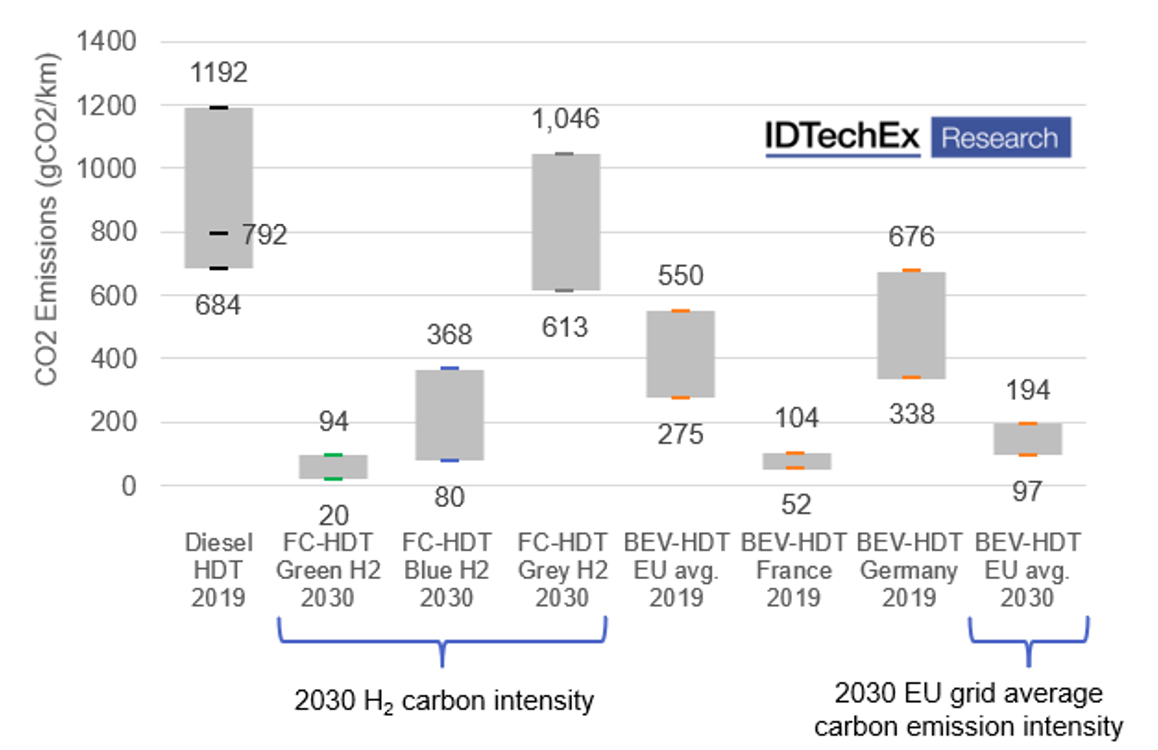 This is not currently happening - a vast majority of the world's hydrogen is derived from fossil fuels (so-called "grey hydrogen") and has a carbon footprint which, considering the intended goal is to reduce emissions from the transport sector, means grey hydrogen makes little sense as a transport fuel.

Nonetheless, today Hyundai have 46 of its XCIENT fuel cell trucks operating in Switzerland as part of plans to introduce 1,600 FC-trucks by 2025. Hyundai have also announced future FC-truck deployments in the US and China. Toyota, Hino Motors, Daimler, Volvo, and Kenworth along with startups Nikola and HYZON are also investing heavily in this space.

Electrification is also taking place on the waterways with electric boats and ships, a market-driven by technological innovations and falling battery costs rather than policy. For example, in August this year, Swedish startup Candela released an electric hydro-foiling boat, with plans to release a small water bus and passenger ferry later, initially in Stockholm.

A hydrofoil is an 'underwater wing' which generates lift when a vessel moves. At speed, the vessel is raised out of the water, which reduces friction. The innovation has more than halved the battery size required to travel 50 nautical miles for electric vessels of a similar size - 45kWh, instead of 120kWh. The release of the new model - the C8 - made improvements to the design to help improve mass production.

The company matched its three-year order book from the previous C7 model in one month. Others also have momentum. IDTechEx states that Torqeedo, a supplier of electric outboard and inboard drives for leisure boats and small fishing boats, has surpassed 100,000 electric boat drive sales in a milestone that marks steady progress for the industry. 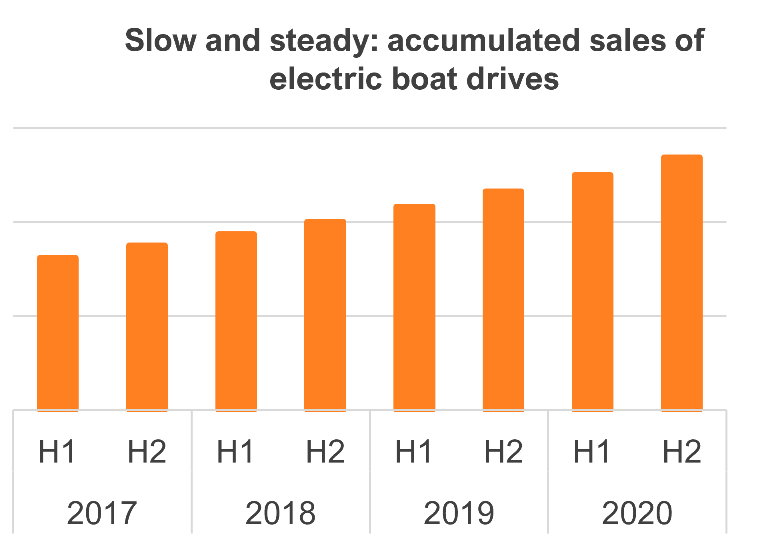 The achievements in this sector have largely been met with little to no financial incentives or regulation on outboard or inland vessel emissions, which are both drivers for other EV segments, as we have seen (the limited emissions regulation that does exist is highly local: a handful of lakes in Germany and Amsterdam's central canals).

Back to the future: electric air taxis

October 21st, 2015 came and went, yet nearly six years later we have yet to see flying skateboards or cars as experienced by Marty McFly in the 1980s. Will we ever see electric air taxis or cars in our cities?

The short answer is yes. In the right applications, electric aircraft can offer cheaper, safer, quieter, and more environmentally friendly air travel, at speeds that offer customers an improved journey time. Recent advances in battery technology and electric motors have facilitated the design of electric vertical take-off and landing (eVTOL) aircraft, with distributed electric propulsion architectures, that can alleviate many of the issues which have prevented helicopter travel from becoming more mainstream.

There is a lot of activity here, and some exciting progress. The IDTechEx report 'Air Taxis: Electric Vertical Take-Off and Landing Aircraft 2021-2041' finds that the closest to market is the Joby Aviation S4 Air Taxi.

Joby has over ten-years of experience in eVTOL design and 1000+ test flights in a full-scale production prototype, beginning FAA certification in 2018. However, the activity in this space should be tempered by the fact that even Joby, with all their experience, said they have "several years" more testing before approval. While this market is coming, IDTechEx believes it will be at least a decade before we see any widespread deployment of air taxis.

One of the major barriers is regulation, rather than technology. From IDTechEx's sample of the most promising eVTOL companies, timelines are highly dependent on the final flight certification process and regulation around flight operations in each geographical market.

The past several months have seen a number of orders for these new aircrafts, with American Airlines, Virgin Atlantic, United Airlines, UPS, and aircraft leasing company Avolon, having all placed pre-orders.

It is increasingly clear that the demand for these aircraft is there.