Home > Industries > London calling - the future for transport in the capital?
Automotive

London calling - the future for transport in the capital?

The streets of London need to be safer and cleaner, according to speakers at Tech XLR8, part of London Tech Week. Steve Rogerson reports.

With its population increasing by the equivalent of two full double-decker buses a week, London faces particular difficulties just standing still, but the city’s leaders are not happy with that and have ambitious plans to lead when it comes to transforming the metropolis into a smart and connected place to live.

It was thus fitting that Michael Hurwitz, Transport for London’s Director of Innovation, was one of the keynote speakers at the Tech XLR8 conference, part of June’s London Tech Week.

One problem, he said, that London had was that it was designed using planning assumptions based on a world that no longer exists. The way people travel, work and communicate has changed dramatically and London’s infrastructure has to change accordingly.

“Every city has its challenges,” he said. “In London, we have an 8.9 million population growing quickly, at the rate of two double-decker buses full a week. We have to make these people fit and we have to talk about the environment.”

Things were improving. For example, in 2015, 64% of journeys in the capital were on foot, bicycle or public transports, but he said the target was to make that 80% by 2041. London already has the tube network and gives buses priority.

“We try to force every second of efficiency out of the road,” said Hurwitz.

The transport network should also improve significantly by the end of this year when the Elizabeth Line opens. This railway will stretch 100km from Reading and Heathrow Airport in the west, across central London, branching out to the Excel exhibition centre, where Tech XLR8 was held, and further out to Shenfield in the east.

London is also a leader in contactless technology with the Oyster Card and similar. And Hurwitz said there were now around 600 transport apps and “some of them are useful.”

On top of the transport problems that TfL was tackling, he said the team was also trying to make London a healthier place to live.

“Healthy streets are now part of everything we do,” he said. “It is affecting all our decision making. And we are constantly ratchetting up our requirements for low emissions.”

While he acknowledged the role autonomous pods could play for some areas of public transport, he said these were not always the answer.

“Taking one double-decker bus and spreading it out into 15 pods is not an efficient use of space,” he said. “But we will see connected and autonomous vehicles in London. We are preparing for scaled up trials. We want to find out where these will help the city network.”

He also said that ride-sharing taxis had problems. “Do you want to share your ride with three drunken men upset that their football team has lost?” he asked. “We need to create a sustainable model for ride sharing.”

“Not everyone can achieve that degree of scale, so only certain players can enter the field at the moment,” he said. “I think the market will adjust itself. The ride-share companies will have to become profitable, and they are not at the moment. Something will have to change.”

And Sam Ryan, Co-Founder of London-based on-demand coach service Zeelo, added: “To compete against Uber, you need to raise a significant amount of money.”

Peck described Uber as “The McDonald’s of mobility”. But said: “That doesn’t mean I have to eat there every day or want to eat there every day. People may want a more comfortable experience. And you are not going to chuck your children into an Uber and hope they will arrive at the other end.”

And Liad Itzhak, a Vice President at mapping and location company Here Technologies, said ride-sharing companies were actually creating difficulties by increasing the number of taxis on the road, a problem that New York was facing. And he pointed out how Uber was operating by doing deals with other tech companies such as Yandex in Russia and Didi in China.

All of this was geared towards trying to solve the main problem and that was people movement.

“How can we help people move in urban areas?” he asked. “The market is hyper-fragmented. Everyone has their own app. We want to combine these securely and help cities control and optimise mobile services.”

But he said the industry did not understand that this was a matter of urgency. 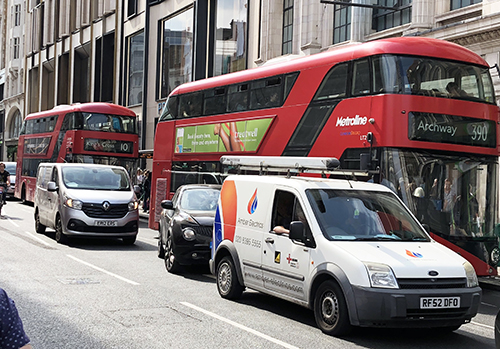 “There is a small window of opportunity of 18 to 24 months,” he said. “We have to do something or the future will suffer from an inefficient mobility market. That window will close. That is why we are helping this transformation by connecting all the different mobility services ourselves and connect them to a single API.”

Neither Peck nor Itzhak thought there would be a problem in financing the transformation of London. “I don’t think revenue will be a major issue,” said Peck. “London has a £14bn transportation industry. The sheer scale and size mean there will be the necessary financial support. It is a very exciting time. This is one of the most exciting spaces you can be in.” And Itzhak added: “The financial side will not be a problem. The cost of inefficiency in traffic is £0.5tn a year in the UK, Germany and US combined, and we can reduce that.”

Bigger than the financial problem is the cultural change that will be needed. As Chris Perry from mobility firm MaaS Global said: “If we can stop individuals owning cars, we can encourage them to use the most environmentally sensible methods.” And this was echoed by Simon Haynes,

Director of Mobiq Group: “Everyone is trying to solve the problem of too much car ownership.”

Perry said that while the industry got the concept of mobility as a service, it was being held back because individual car owners did not know how much they spend on their cars.

“We have to go through an education phase to get them to know how much ownership of a car costs,” he said.

But the culture problem really surfaces when the talk moves on to autonomous vehicles and safety.

“People expect autonomous vehicles to be one order of magnitude safer,” said Pejvan Beigui, Chief Technology Officer at autonomous vehicle technology company Easymile. “Human drivers are extremely good drivers and to expect autonomous vehicles to hit that level of safety as they go out on the road is a very big challenge. We need to face this cultural challenge, and that will probably be bigger that the technical ones. The technology will get there, but it is still not ready. The crashes from Tesla and Uber show that it is not ready, but there are plenty of start-ups working on this.”

The trend towards smart cities is global, from villages in Africa to the giant metropolises in North America and Asia. In Europe, where public transport has always been a priority, it is not surprising that buses, trains and autonomous vehicles have been a focus for city planners. London hopes to lead the way.